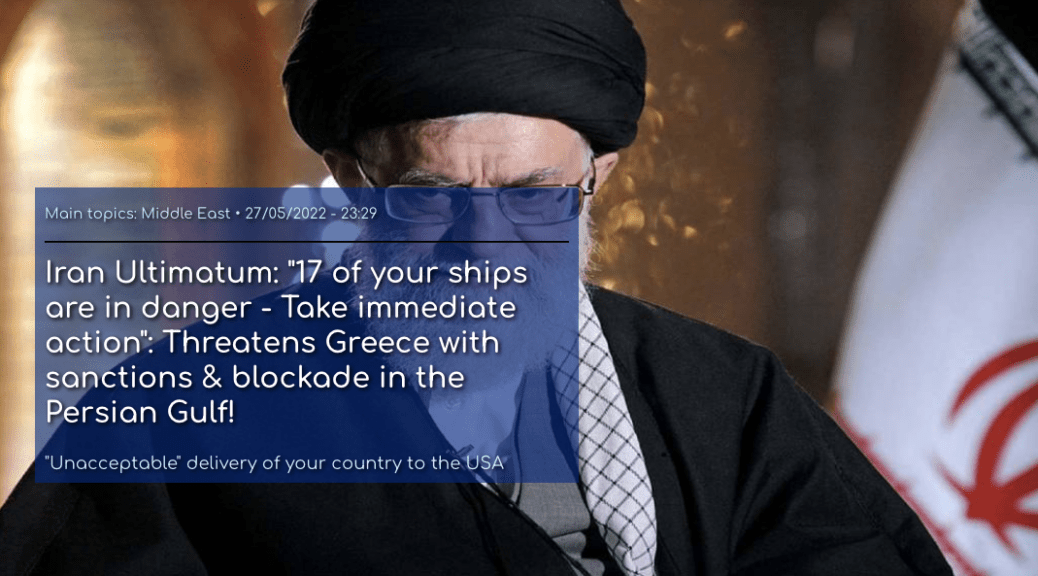 From Greek WarNews 24/7. Nothing from Reuters

Iran Ultimatum: “17 of your ships are in danger – Take immediate action”: Threatens Greece with sanctions & blockade in the Persian Gulf!

“Unacceptable” delivery of your country to the USA

Iran demands that Greece immediately rectify the incident with the Iranian cargo and threatens the Greek ships with a blockade in the Persian Gulf, saying that there are “there are still 17 ships to be seized in the area”.

At the same time, Iranian media report that sanctions will be imposed in Greece!

“Iran will take sanctioning measures against Greece, due to the seizure of a tanker with Iranian oil, which was carried out by the Greek authorities and its transhipment on a ship leased by the USA.”

This was reported by the Iranian state agency without specifying what these measures may be.

However, the threat of a blockade on the Persian is very serious and has many implications.

Iran: “Unacceptable” surrender of Greece to “illegal” US pressure

The Ports and Maritime Organization of Iran (PMO) issued a statement describing the seizure of Iranian cargo as “piracy” that “violates international standards.”

The PMO said the Iranian-flagged ship was detained by the Greek government off the country and the cargo on board was seized following a court order and in coordination with the US government.

The boat encountered bad weather and encountered some technical problems, which led it to seek help, the statement added.

According to international and technical regulations and standards, the state with the closest shoreline to the boat calling for help due to safety threats should work together to guide the boat to a safe place, he said.

In a related development on Wednesday, the Greek authorized in Tehran was summoned to the Iranian Ministry of Foreign Affairs for the seizure of Iran’s slow cargo in Greek waters.

The Greek envoy was summoned by the head of Mediterranean and Eastern European affairs to the ministry on Wednesday, where he was briefed on his country’s international obligations regarding the ship’s emergency stop due to a technical failure.

The ministry official condemned Greece’s “unacceptable” surrender to “illegal” US pressure and said the “seizure of the cargo” under the flag of the Islamic Republic of Iran was “a case of international piracy”.

The Iranian official said that his country holds the Greek government and those who seized the ship responsible for the illegal act.

The official also stressed that Iran “will not relinquish its legal rights and expects the Greek government to abide by its international commitments in the shipping sector.”

Iran: There are 17 more ships – They are asking for compensatory measures!

The result made earlier by the men of the Islamic Revolutionary Guard Corps (IRGC) of Iran in two Greek tankers in the Persian Gulf, may not be just the beginning of the Iranian retaliation against Greece, for the seizure in Karystos of a ship under Iranian flag, with the Iranians claiming that the move was coordinated with the US.

The Guards of the Islamic Revolution seized the Delta Poseidon ships of the Delta Tankers company of Diamantis Diamantidis and the Prudent Warrior of the Polembros Shipping Limited company of interests of Spyros Polemis. Reacting, the Greek Foreign Minister proceeded with a strict protest, talking about “acts of piracy”.

“The seizure of Greek oil tankers in the Persian Gulf today and during a coordinated and simultaneous operation took place in the fourth and fifth naval area of ​​the IRGC.

There are also 17 other Greek ships in the Persian Gulf, which could be seized by the IRGC if Greece continues its challenges…

“Greece should take compensatory measures for the Iranian oil tanker as soon as possible.”

In fact, they also report that the two Greek ships that were seized have a capacity of 1.8 million barrels of oil or other petroleum products, which, “if fully loaded, are now available in Iran.”

Iran’s “Revolutionary Guards” claimed responsibility for the seizure of two Greek tankers in the Persian Gulf on Friday, confirming WarNews247, which broadcast hours before the news.

According to the IRGC Corps of Guards: “Today (Friday) the IRGC Navy seized two Greek oil tankers due to violations in the blue waters of the Persian Gulf.”

According to Al-Mayadin TV, which quotes the Coast Guard, the Iranian Coast Guard seized the two tankers off the coasts of Bandar Lengeh and Assaluyeh.

According to Iranian media, the Iranian forces let the ships load, occupied them and confiscated them.

According to the Ministry of Foreign Affairs, armed Iranians were intercepted by helicopters in the Delta Poseidon of the Delta Tankers company, owned by Diamantis Diamantidis, which was sailing in international waters, 22 nm. from the coasts of Iran, and occupied it. The same happened in the Prudent Warrior, of the company Polembros Shipping Limited, interests of Spyros Polemis. The ships were driven to Iranian ports.

Among the captured crews are 9 Greek sailors.

The 5th US Fleet in the Middle East has been updated

The US Navy’s 5th Fleet, based in the Middle East, said on Friday it was considering reports that Iran had seized two Greek oil tankers following Tehran’s threat to take “punitive measures” against Athens over the seizure of one of its tankers. (Pegas), reports the AP

Iran’s Islamic Revolution Guards Corps (IRGC) on Friday seized two Greek oil tankers in the Persian Gulf over violations, days after an Iranian oil tanker was captured by Greece in its territorial waters followed by transfer of the oil to the US.

“The IRGC Navy today seized two Greek oil tankers for violations they have carried in the azure waters of the Persian Gulf,” the IRGC said in a statement.

Earlier in the day, Iran’s Nour News reported that the country was going to take “punitive action” against Greece over the tanker’s seizure.

Nour News, which is affiliated with the country’s Supreme National Security Council (SNSC), made the announcement without explaining what kind of action the Islamic Republic intended to take.

Iran’s Ports and Maritime Organization (PMO) issued a statement on Wednesday, describing the US seizure of the Iranian oil cargo from a Russian-operated ship in Greece’s territorial waters as an “act of piracy” that was “in violation of international standards”.

The US government confiscates an Iranian oil cargo seized near Greece, according to a report.

The PMO said the vessel had been held by the Greek government on the coasts of that country, and the cargo on board the ship was seized upon court order and in coordination with the US government.

On Thursday, Reuters quoted unnamed sources as saying that the US Department of Justice had confiscated 700,000 barrels of Iranian oil cargo seized last month off the southern Greek island of Evia onboard a Russian-operated ship.

Meanwhile, the US Navy’s Mideast-based 5th Fleet said it was “looking into” reports that Iran had seized two Greek oil tankers.

Cmdr. Timothy Hawkins of the 5th Fleet told The Associated Press that the Navy was continuing to investigate, without further elaborating.

A report by Lloyd’s List Intelligence said that in two seemingly similar operations, the suezmaxes Delta Poseidon and Prudent Warrior, both under Greek flag, were seized by Iranian forces on Friday afternoon.

Also on Friday, Iran’s Foreign Ministry summoned the chargé d’affaires of Switzerland, which represents Washington’s interests in Tehran, to protest the US seizure of the Iranian oil cargo.

The ministry also on Wednesday summoned the Greek chargé d’affaires to protest the move.

Greece confirms seizure of its tankers

Athens announced on Friday that Iranian navy helicopters had landed gunmen on the two tankers earlier in the day.

One of them, the Delta Poseidon, was sailing in international waters at the time, the Greek Foreign Ministry said, adding that the second tanker was near the Iranian coast when seized.

The ministry also said nine Greeks were among the crews of both vessels, but did not give a number of other sailors on board.

Athens has informed the European Union and the International Maritime Organization of the incident, it added.

According to Lloyd’s List Intelligence, Delta Poseidon’s destination was Agioi Theodoroi, near Corinth, and the cargo is understood to be for the Motor Oil refinery located there.

Press TV’s website can also be accessed at the following alternate addresses: