killed in strike on convoy at 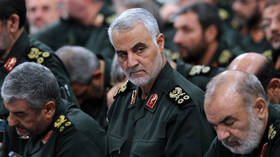 The
head of Iran’s elite Quds Force, Qassem Soleimani, has been killed
in a strike near the Baghdad International Airport, along with senior
leaders of the Iraqi Shia militia, the Iran Revolutionary Guards
Corps has confirmed.

The
news of the commander’s demise was carried by Iran’s
semi-official Fars news agency, citing The Islamic Revolutionary
Guard Corps.

“The
American and Israeli enemy is responsible for killing the mujahideen
Abu Mahdi al-Muhandis and Qassem Soleimani,” said Ahmed
al-Assadi, a spokesman for Iraq’s Popular Mobilisation Forces, as
cited by Reuters.

Al-Muhandis
is the deputy chief of the Popular Mobilization Forces, the umbrella
group of Shia militias integrated into the Iraq’s armed forces,
which was blamed for the siege of the US embassy in Baghdad earlier
this week. 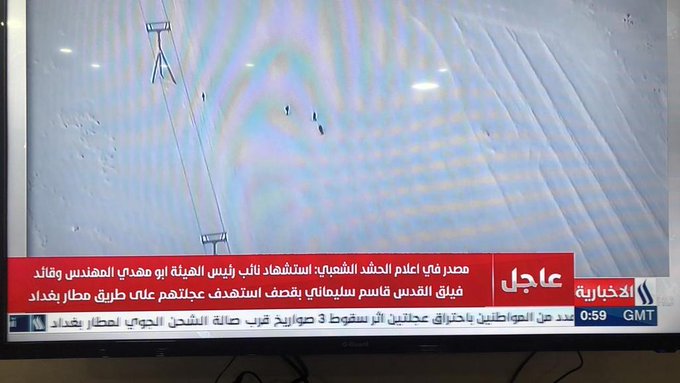 Al-Muhandis
and Soleimani were apparently in a convoy traveling near the Baghdad
airport when it was struck by multiple missiles. The PMF earlier
confirmed the deaths of five of its members and two “guests.”

Reuters
reported that the Pentagon has claimed responsibility for the strike,
citing an unnamed US official.

US
Marines also reportedly captured two other influential Iraqi militia
figures around the time of the strikes – Qais Khazali, head of the
paramilitary group Asaib Ahl al-Haq, and Badr Organization leader
Hadi al-Amiri – in a neighborhood of Baghdad, according to Al
Arabiya.

While
still lacking official confirmation that Washington was behind the
assassinations, some US lawmakers have already challenged the
legality of the supposed American raid, as Congress was apparently
left in the dark about the mission. Senator Chris Murphy (D-CT)
weighed in with a tweet later on Thursday, sounding alarm that the
unauthorized operation could kick off a “massive regional war,”
even though Soleimani was an “enemy of the United States.”

The
high-profile assassinations come as tensions soar between Tehran and
Washington over recent events in Iraq. An American air raid on an
Iraqi Shia militia last weekend triggered a heated protest at the US
embassy complex in Baghdad’s heavily fortified Green Zone on
Tuesday, where demonstrators smashed windows, set fires and chanted
“death to America.” Washington claimed the raid was in
retaliation for a militia rocket attack on a US base in Kirkuk, and
that Iran provided backing for the assault, though offered no
evidence.

US
Gov Airstrikes On Iraqi

Official, As US
Claims