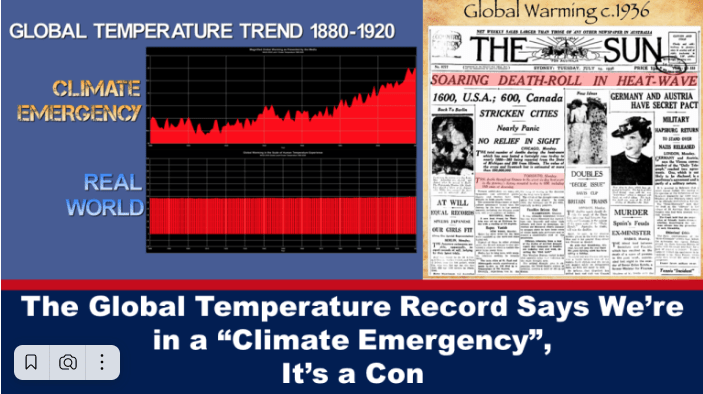 Usually, when I look for evidence from the climate change sceptics I am disappointed.

I am seeing so many examples of faked data etc., that it behooves me to pay some attention.

The Daily Expose does an analysis of the statistics.

The Global Temperature Record Says We’re in a “Climate Emergency”, It’s a Con

Official Government Data Shows an alarming rapid rise in temperature over 140 years. NASA offers a graph of global temperature for each year from 1880 to the present which shows that we are in a runaway warming trend that constitutes a “climate emergency.”  It’s a statistical sleight of hand. The widely cited NASA global temperature graph is highly magnified and visually misleading. But that hasn’t stopped corporate media from using NASA’s data to inform their readers of a “climate emergency.”

In an article, EverythingClimate (“EC”) demonstrated how, by manipulating how data appears on a chart, a “climate emergency” is manufactured.  Although it’s not clear when the article was published, EC uses the example of a Guardian article from January 2020 which may indicate it was written in the same year.

Irrespective of the date it was written or published, EC’s article is as relevant then as it is today, especially in the context of “record” temperatures over the first couple of days this week in the UK.  And at the very least, what this article proves is we should question everything corporate media is promoting.  Corporate media have long lost their purpose of being sources of unbiased journalism and providing the public with the facts they need to know.

EC is a website covering both sides of the climate debate. It is devoted to cataloguing, evaluating and publishing information concerning scientific theories of global warming.

NASA’s Goddard Institute for Space Studies (“GISS”) is the original organisation to raise the warning on global temperature increases, due to increasing carbon dioxide in Earth’s atmosphere, during an address to the US Senate by Dr. James Hansen in June 19881.

NASA GISS maintains a website where the data and graphs derived from that data are publicly available. They say:

The GISS Surface Temperature Analysis ver. 4 (GISTEMP v4) is an estimate of global surface temperature change. Graphs and tables are updated around the middle of every month using current data files from NOAA GHCN v4 (meteorological stations) and ERSST v5 (ocean areas), combined as described in our publications Hansen et al. (2010) and Lenssen et al. (2019). These updated files incorporate reports for the previous month and also late reports and corrections for earlier months.

They offer a graph of global temperature for each year from 1880 to the present as seen below.

This particular graph (Figure 2) is the most cited and referenced graph of its kind in the world, depicting a sharp rise in global temperature over the 140 years from 1880 to 2020. It shows that we are in a runaway warming trend that constitutes a “climate emergency”.

Media outlets understand and have adopted the term “climate emergency” and use it more frequently in headlines. In a 2020 article, seen below, they use data from NASA GISS to inform their readers.

The average temperature in 2019 was about 1.1C above the average from 1850-1900, before large-scale fossil fuel burning began. The world’s scientists have warned that global heating beyond 1.5C will significantly worsen extreme weather and suffering for hundreds of millions of people.

The term “climate emergency” has seen a surge in use ever since its awareness grew after being used by the media to describe what appears to be a rapid global temperature rise.

Oxford Dictionary chose climate emergency as the word of the year 2019 and defines the term as “a situation in which urgent action is required to reduce or halt climate change and avoid potentially irreversible environmental damage resulting from it.” Usage of the term soared more than 10,000% between September 2018 and September 2019.

The steep slope of the graph makes clear that Earth’s temperature is rising so quickly that it constitutes an emergency requiring immediate action.

Note that the Guardian article cites:

The entire graph and temperature data set from NASA GISS is displaying just a small change of 1.1°C of temperature, which is highly magnified to show the trend. Because this small temperature change is magnified, it gives the false impression of having a steeply rising slope. For the unobservant, that steep slope looks like a dangerous trend that would constitute a “climate emergency”.

Note the two graphs below. Figure 4 shows how global warming is depicted in the media from NASA GISS data (such as seen above in the Guardian article), plotting a narrow temperature range to show a magnified graph.

Figure 5 below shows the exact same data when plotted on the scale of human temperature experience, such as the range of temperature we experience yearly from winter to summer. This is done by removing the anomaly calculation from the GISS data, using the agreed-upon baseline temperature:

GISS Surface Temperature Analysis, NASA [Note: This page was updated on 18 March 2022.  It would appear the quote above may have been amended to read “they often used a baseline of about 14°C (following Jones et al, 1999)”]

Simply using an Excel Spreadsheet allows us to add that 57.2°F temperature back to the NASA GISS anomaly data value. You can download and examine the spreadsheet here for yourself: GISSinabsolute2020.xlsx or Download

The result of that process gives you Figure 5:

Figure 5 shows a slow, and gradual temperature rise in actual absolute temperatures over the last 140 years. The difference with Figure 4 is striking and doesn’t look alarming at all.

If you were presented with Figure 5 as proof of an impending “climate emergency” would it be as concerning as Figure 4 or the NASA GISS graph commonly cited in the media?

In the article Lessons on How to Lie with Statistics by Will Koehrsen Jul 28, 2019, he makes the following point:

How to Lie with Statistics2 is a 65-year-old book that can be read in an hour and will teach you more practical information you can use every day than any book on “big data” or “deep learning.”

Always Look at the Axes on a Chart

Adjusting the axes of a graph to make a point is a classic technique in manipulating charts. As a first principle, the y-axis on a bar chart should always start at 0. If not, it’s easy to prove an argument by manipulating the range, by, for example, turning minor increases into massive changes:

Lessons on How to Lie with Statistics, Will Koehrsen, 28 July 2019

Just like in the GISS temperature graph that uses a non-zero starting point for the Y-axis, the first Figure 6 graph on the left suggests interest rates are rising dramatically. But, when plotted in the full context of the data, on the right, the rise in interest rates does not look concerning at all.

The same misleading process is on display with the NASA GISS temperature graph comparison in Figures 4 and 5.

Magnified and scary-looking temperature data aside, many scientists don’t believe we have a “climate emergency” at all even though high-schooler Greta Thunberg is impassioned enough to present her concerns to the United Nations3.

But some 500 scholars and scientists say there’s no “climate emergency” at all.

On the [same day] that Greta Thunberg made an impassioned speech to the United Nations about her fears of a climate emergency, a group of 500 prominent scientists and professionals, led by the CLINTEL co-founder Guus Berkhout, sent this registered letter to the United Nations Secretary-General stating that there is no climate emergency and climate policies should be designed to benefit the lives of people. Here’s the press release, and here’s the list of 500 signees.

There Is No Climate Emergency, Say 500 Experts in Letter to the United Nations, American Enterprise Institute (AEI), 1 October 2019

Clearly, the global temperature data does not support the idea of a “climate emergency”, because when you view it on the proper scale of normal human experience, the steep rise in temperature disappears. And clearly, 500 knowledgeable people of science say there’s no need to worry.

One thought on “Is global temperature data manipulated?”