It came through first as a credible rumour…. 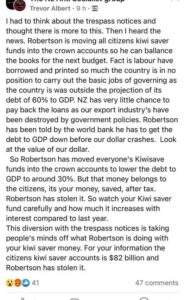 But never believe a rumour until it is officially denied

Rumours the Government plans to use KiwiSaver funds to balance its debt are “totally untrue”, a spokesperson for the Minister of Finance says.

The rumours stem from Finance Minister Grant Robertson’s new fiscal rules announced on Tuesday ahead of the upcoming Budget release on May 19.

Robertson said Treasury, the Government’s lead advisor on economic and financial policy, recommended including a wider range of assets – including the Superannuation Fund – in its debt measure, to align with other countries.

“The new measure gives a headline net debt figure about 20 percentage points lower than the current one, but is more internationally comparable,” Robertson said.

“I will ensure that the Budget documents continue to publish the old measure alongside the new measure for transparency and the ability to make historical comparisons for the time being.”

It seems there’s now confusion about the inclusion of the NZ Superannuation Fund in the Government’s debt measure.

A tweet, which at the time of publishing had 155 likes and had been shared nearly 50 times, alleged the Government was moving KiwiSaver funds into Crown accounts to “balance the books for the next Budget”.

The rumour appears to have been taken seriously.

“It was always going to happen,” a Twitter user wrote. “To think people actually trust any government with their retirement.”

“Creative accounting is the oldest trick of the trade…” another said.

The rumour seems to have influenced other comments online, with one Facebook user writing: “Hope Grant isn’t digging into NZ Kiwi savings for his Budget.”

But others pointed out that KiwiSaver seems to have been confused with the Superannuation Fund.

KiwiSaver is a voluntary contribution scheme to help New Zealanders save for their retirement. It cannot be accessed and used by the Government.

The Superannuation Fund, on the other hand, is a state-owned investment pool of money that provides a universal pension for Kiwis over 65 years of age.

A spokesperson for Robertson told Newshub they were aware of the KiwiSaver rumours, and confirmed it’s “totally untrue”.

It comes the same week as Robertson was at pains to reassure New Zealanders he is a good economic manager. He’s also given himself a new debt limit.

Under the old measure of net debt, Treasury recommended a limit of 50 percent of GDP (net debt is currently 36.6 percent by this measure). But translated to the new debt measure, the cap is 30 percent of GDP (by that measure we’re at around 17 percent).

“It is a limit rather than a target, and again is flexible enough to allow a buffer against short-term shocks, while providing greater room for productive investment,” Robertson said.

“While this rule still gives us a comparably low level of net debt, it will provide fiscal space to fund high-quality capital investments that improve productivity and wellbeing.”

Robertson has given himself $6 billion in new spending for the upcoming Budget, the majority of which is expected to be spent on the Government’s health system restructure and climate change initiatives.