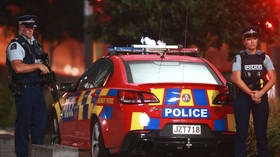 New Zealand – the “land of the long white cloud” – has evolved into a police state overnight amid the fallout of Covid-19, with people now being encouraged to dob in fellow Kiwis who flout lockdown rules.

While slow to apprehend Covid-19 initially and taking nonsensical measures such as banning travel from Iran while allowing travel from Italy unabated, the New Zealand government quickly changed tack and announced it was implementing a four-tier threat level to deal with the virus. It wasn’t long after this that the government gave New Zealanders a two-day period for everyone to tie up loose ends and prepare for what is essentially a nationwide lockdown (threat level four), which will continue for at least four weeks.

As part of this, a state of emergency was declared last week which saw the powers-that-be activate emergency legislation. This current state of affairs enables New Zealand’s National Emergency Management Agency (NEMA) to close or restrict access to roads or public places, regulate land, water and air traffic, and even evacuate and enter people’s premises, among other measures. The New Zealand police are responsible for maintaining law and order during the state of emergency, and have been given special powers to order any person to stop any activity that contributes to the emergency. As of today, the state of emergency has been extended by another seven days.

So, what? I hear you ask. The Covid-19 crisis is an unprecedented situation which can lead to immense death and suffering, and has already begun undertaking that course of action in Italy, Iran, Spain and even in the US. Calling New Zealand’s response a descent into a “police state” is nothing more than a conspiracy theory, aimed at fueling and sparking more panic in an already panic-driven environment.

Well, perhaps you might want to tell that Victoria University’s associate law professor, Dean Knight, who said that with so much discretionary power, there is a very real risk that the discretion could be used in an arbitrary and discriminatory manner. Or how about University of Otago law professor, Andrew Geddis, who has questioned the current state of affairs in two separate op-eds, warning that police can use “extreme and unprecedented” powers to constrain basic freedoms of movement guaranteed by the New Zealand Bill of Rights Act.

We could say the same of Radio New Zealand contributor Catriona MacLenna, who penned an open letter to the country’s police with the aim of making it crystal clear that “New Zealand is a democracy,” “not a police state.”

We might also want to tell that to journalist Damian Christie. Christie was in the process of delivering video equipment to a client’s business with a letter firmly in hand to prove that what he was doing was regarded as being part of an essential service, his client being a large food producer. Despite producing this letter (and having no discernible legal obligation to do so), a police officer who stopped him began to yell at him and flat-out ignored the letter, even though we had been told that if we provide such a letter, we won’t experience any issues. According to the officer, however, Christie should only have left his house to buy medical supplies.

This is clearly untrue and, as Professor Geddis notes in his columns, has created much confusion about what we can and can’t do under the lockdown rules. I agree with Geddis that if there has been an instruction given to the police to apply these powers, then we need to see those instructions.

On top of all of this, the government saw fit in the most Orwellian way possible to set up an online mechanism for locals to “dob in” other fellow Kiwis who were flouting the lockdown rules. Within an hour of it being launched, over-zealous New Zealanders crashed the website with over 4,200 reports lodged. Police have also arrested a number of people for breaching the lockdown rules. I expect this number to climb somewhat over the next three weeks.

I don’t know how comfortable I am with a website where people can dob in other people without requiring any demonstrable evidence. I am also concerned as to what this precedent could achieve in the future. Perhaps the next lockdown won’t be because of Covid-19, but because of a different situation entirely. What if the next website is set up to dob in not flouters of the lockdown, but say, political dissidents?

We are always naive in thinking that this type of activity can never occur in New Zealand, even when the Government Communications Security Bureau (GCSB) has been found to have spied on targets illegally; or that time the Snowden papers revealed that the GCSB was spying on the entire Pacific on a mass scale without the knowledge of its neighbors. How quickly New Zealanders seem to forget these facts, or perhaps simply turn a blind eye to them from the outset.

The emergence of New Zealand’s police state apparatus comes at an interesting time. The Court of Appeal just ruled last week that New Zealanders have no constitutional right to bear arms, following a failed legal challenge by the “Kiwi Party.” While denying that right, the government has been quietly rolling out an extensive armed police patrol trial which saw units deployed 75 times a day in their first five weeks (what on Earth for?)

Look, I get it. I take the Covid-19 crisis as seriously as the next person, and for that matter, the overarching principles of the lockdown requirements. But that doesn’t mean we shouldn’t question power and the abuse of that power, even during a national and global state of emergency.

As Benjamin Franklin’s old adage goes: “Those who would give up essential liberty, to purchase a little temporary safety, deserve neither liberty nor safety.” And they’ll probably end up losing both.