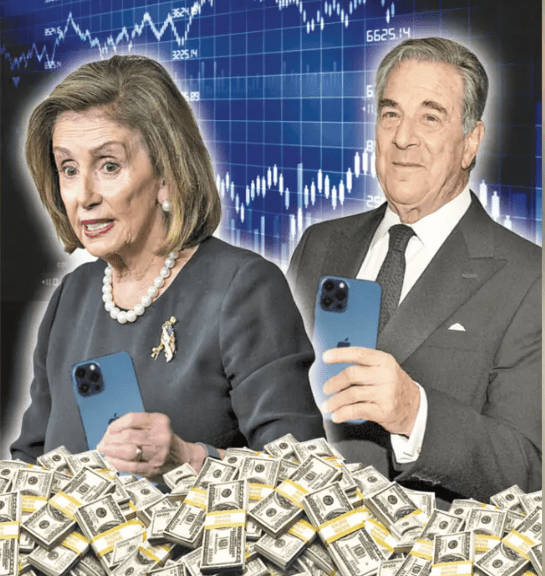 It’s certainly convenient that Nancy is out of the country at this juncture when a lot of the Establishment is not sure she should be.

Is this the reason? I very much doubt it but this is interesting context

So how was your day, honey?

As House Speaker Nancy Pelosi leads a delegation on a high-stakes visit to Taiwan that has roiled relations between China and the US, her husband will appear in court on DUI charges more than 6,000 miles away.

Paul Pelosi, 82, is scheduled to be arraigned Wednesday morning on charges of driving under the influence causing injury and driving with a .08% blood alcohol level or higher causing injury, the Napa County District Attorney’s Office said in a press release.

Paul Pelosi was arrested on May 28 after a man driving a 2014 Jeep crashed into Pelosi’s Porsche as he left for his and his wife’s vineyard after attending a dinner party.

The DA said Pelosi has not been ordered to appear in person and may be represented by an attorney who can enter a plea on his behalf.

Across the Pacific, Nancy Pelosi’s visit to Taiwan has alarmed China, which has responded by sending warplanes and ships across the imaginary maritime dividing line between the two countries in the Taiwan Strait.

Pelosi’s stay in Taiwan, part of a trip that includes Singapore, Malaysia, South Korea and Japan, has rankled Beijing, which considers the self-ruled island part of its territory and has threatened to take over the country by force if necessary.

Along the military maneuvers, China has continued to issue warnings to the US about Pelosi’s visit, repeating that America is “playing with fire.”

After Pelosi touched down in Taipei late Tuesday, China’s Foreign Ministry said the trip “gravely undermines peace and stability across the Taiwan Strait, and sends a seriously wrong signal to the separatist forces for ‘Taiwan independence.’”

At the same time, the US Navy has moved four warships, including an aircraft carrier, into the waters east of Taiwan.

Democrats have carved out fairly a area of interest for themselves because the celebration of the have-nots, even when it’s largely a hypocritical advertising ploy. Bernie Sanders, the socialist, lives a fairly non-socialist life with a city home, a trip dwelling and all the comforts of the bourgeoisie whereas he claims to champion the proletariat.

There’s no scarcity of related examples. Recall the late Massachusetts senator and liberal icon Teddy Kennedy’s assist of compelled busing whereas sending his youngsters to non-public college again within the Nineteen Seventies. The newest of these “freedom for me but not for thee” ­hypocrisies includes the matter of Paul Pelosi, the octogenarian hubby of Nancy Pelosi, the octogenarian lefty speaker of the House of Representatives.

Paul Pelosi has been killing it in the stock market in recent years, in accordance with disclosure kinds, for causes that might nicely transcend some innate means to sense swings within the markets. His newest dwelling run: Snapping up between $1 million and $5 million in shares of computer chip darling Nvidia (through exercising name choices) on June 17, in accordance with disclosure paperwork.

His timing, once again, was impeccable: He executed the trades as Congress strikes nearer to passing tens of billions of {dollars} in corporate-welfare subsidies for US semiconductor manufacturing. That’s excellent news for Nvidia and shareholders like Paul Pelosi. Since his guess, shares have risen practically 10%. By my math, he may have pocketed a fast $500,000.

Maybe Paul Pelosi is aware of a factor or two about inventory trading. Or possibly he’s simply a savant, like Hillary Clinton, who years in the past credited her studying of The Wall Street Journal with having the ability to make huge bucks trading esoteric cattle futures.

One drawback with giving Paul Pelosi the profit of the doubt is that sufficient of his winners contain corporations that seem to have been benefiting from laws that his spouse, because the highly effective lefty home speaker, has a hand in.

Paul and Nancy have been married for occurring 59 years. He’s been at Nancy’s facet throughout her rise to the head of Democratic Party management. She has definitely benefited from his profession as a profitable Silicon Valley investor.

His trades are her trades

The cause we learn about Paul Pelosi’s market prowess is as a result of members of Congress are required to reveal such investments, and since he’s married to Nancy, his trades, underneath the disclosure guidelines, are her trades.

And it explains why Nancy ­Pelosi is one of the richest members of Congress — with an estimated internet value of greater than $100 million on an annual wage of about $200,000.

The energy couple have a winery in tony Napa Valley plus many of the perks of wealth and standing. She represents the dysfunctional congressional district in and round San Francisco, which implies she’s recurrently attacking wealth creators whereas advantage signaling concerning the poor and downtrodden — who stay so ­underneath her watch.

It’s limousine liberalism on steroids. Happily for them, their allegiance to lefty politics someway stops in terms of companies involving Paul.

Paul is a longtime enterprise capitalist. Where’s Nancy on eliminating that controversial, anti-progressive venture-capitalist tax break referred to as the carried-interest deduction, which provides favorable tax therapy to him and different gazillionaires?

Where is she on ensuring members of Congress or their spouses can’t profit from an ­info edge — notably on market-moving laws?

Here, Nancy is a born-again capitalist. She and her hubby “should be able to participate in that,” she mentioned final yr when requested about her hubby’s trading.

Insider trading — or trading shares on materials, private info — is a crime, of course. Recent laws places individuals who use info they realized primarily based on their place in Congress (or their partner’s) in the identical slimy bucket.

But most lawmakers who’ve been investigated for allegedly ­utilizing their place to commerce nearly at all times by no means face felony fees. See the case of North Carolina Republican Sen. Richard Burr. Lawmakers get personal briefings, as Burr did earlier than promoting inventory simply earlier than the pandemic rocked the markets. They can and do level to the truth that the identical info was swirling round on the Internet or enterprise tv.

That’s why any case in opposition to Paul Pelosi would doubtless go nowhere. His timing on Nvidia could have been fishy, however he may simply as simply level to numerous information reviews concerning the laws going again not less than six months, lengthy ­earlier than his trades had been made.

So it may not be illegal — however it positive does look scummy. The Pelosis are in positions of affect with entry to info not accessible to most Americans. And they haven’t any disgrace taking tens of millions whereas Nancy Pelosi leads a celebration that’s devoted to advantage signaling concerning the sins of capitalism.

There ought to be a legislation in opposition to that