RT,
3 September, 2021
A stabbing attack in an Auckland supermarket in which multiple people were injured was an act of terrorism, New Zealand’s prime minister says. The suspect was shot dead by police.

“This afternoon, at approximately 2:40pm, a violent extremist undertook a terrorist attack on innocent New Zealanders in the New Lynn Countdown [supermarket] in Auckland,” Ardern said at a press conference.

The suspect was a known threat to authorities and under constant monitoring, she added.

Ardern said the terrorist was a Sri Lankan national who arrived in the country in 2011 and became a person of national security interest from 2016. She described the attacker as an ISIS-inspired “lone wolf.”

The PM confirmed that the terrorist injured six people, three of them seriously, on a stabbing rampage inside a supermarket in New Lynn, a suburb of Auckland. The terrorist was shot and killed roughly 60 seconds later by the same police unit that was tasked with monitoring him, Ardern said.

Police Commissioner Andrew Coster said the terrorist had traveled to the supermarket from Glen Eden, another Auckland suburb, as he had done in the past – all while being “closely watched” by a surveillance team and a tactical team. He entered the store and obtained a knife there.

“When the commotion started, two police tactical operators moved to his location and engaged him. When he approached them with a knife, he was shot and killed,” Coster explained. He said police intervened as quickly as they could, preventing further injuries to shoppers.

The reality is that when you are surveilling someone on a 24/7 basis, it is not possible to be immediately next to them at all times.

Addressing potential questions about the monitoring of the terrorist, the prime minister said the government “utilized every legal and surveillance power available to us to try and keep people safe from this individual.”

The attacker’s name has not been released to the public yet, though Ardern said additional information on his identity would be shared as soon as possible.

A video circulating on social media shows frightened shoppers at the supermarket and a body lying on the floor next to a checkout counter.

The New Zealand Herald reported that the alleged attacker was a 32-year-old man who was considered a public threat for twice buying large hunting knives and possessing an Islamic State (IS, formerly ISIS) propaganda video. The paper reported last month that the man was accused of planning a lone-wolf stabbing attack, but was ultimately sentenced to one year of supervision, a punishment designed to rehabilitate low-level offenders.

In May, a 42-year-old knifeman was detained after injuring four people inside a Countdown store in the city of Dunedin, on New Zealand’s South Island. The prime minister and police said at the time that the incident was not a terrorist attack.

It perhaps says  something about me that whenever any of these attacks happens I have to be PERSUADED that it was a FALSE FLAG. Almost immediately there are aspects of this that jump out, even at this early juncture. As has been the case in all attacks, once again the perpetrator was well–known to the authorities.

A 32-year-old man, who authorities knew was a supporter of Islamic State, walked into a Countdown supermarket in Auckland on Friday afternoon, and took a knife from the shelf to attack shoppers – injuring six people before being shot dead by two police officers.

The officers, already nearby, had been monitoring him 24/7 for “some time”. The man was such a threat that he was already known to Prime Minister Jacinda Ardern, by the intelligence agencies, and to the courts. He was first identified as a threat in 2016.

BUT…. Despite this they were unable to prevent the attack.

The reality is that when you are surveilling someone on a 24/7 basis, it is not possible to be immediately next to them at all times (sic)

Once again we have a “lone wolf attack”. Comrade Jacinda tells us:

Once again we have an individual (who used to be a friend) calling for more repressive legislation (we don’t have enough). 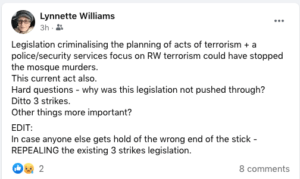 This same person two years ago loudly called for people in possession of the Brendon Tarrant video or suggesting that it was a false flag, be DOBBED IN.

Another respectable person (who is actually a Stalinist) pushing the most extreme narrative.

Might this be the next thing we could expect from Cmde. Jacinda – or more extreme?  After all, it has been tried before: 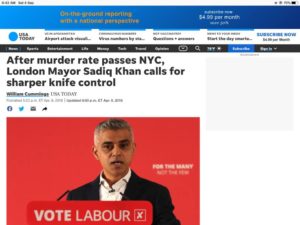 Kiwis are too reasonable to consider such nonsense??

Here we have even the mainstream media asking some questions.

A terror attack that occurred while the Government was watching

This was a terror attack that occurred under the Government’s watchful eye. It did not come from nowhere.

A 32-year-old man, who authorities knew was a supporter of Islamic State, walked into a Countdown supermarket in Auckland on Friday afternoon, and took a knife from the shelf to attack shoppers – injuring six people before being shot dead by two police officers.

The officers, already nearby, had been monitoring him 24/7 for “some time”. The man was such a threat that he was already known to Prime Minister Jacinda Ardern, by the intelligence agencies, and to the courts. He was first identified as a threat in 2016.

Yet, as Ardern said in the hours afterward, the Government believed it had done everything it could to stop this man from committing an attack. He was one of “very few” to have reached such a level of concern.

“The fact that he was in the community will be an illustration of the fact that we haven’t succeeded in using the law to the extent we would have liked. That is why he was being closely monitored at all times,” Ardern said.

There had been fair warning about the possibility of an attack. The nation’s intelligence agencies have, since the Christchurch mosque terror attack in 2019, warned that among the threats being monitored were “a small number” of Islamist extremists known to the agencies who could commit an unsophisticated attack.

“What happened today was despicable, it was hateful, it was wrong,” Ardern said on Friday.

“He alone carries the responsibility for this attack. Let that be where the judgement falls.”

This may be true. But the difficulty for the Government is that, after the Christchurch mosque terror attack, it was given a roadmap to improve the counter-terrorism response. And that roadmap included new laws that might have imprisoned the terrorist months ago.

Already there is much known about how this terrorist was handled since 2016. He had been flagged for consuming propaganda from Islamic State of Iraq and Syria (Isis), a designated terrorist organisation, and he had been warned for posting material on the Internet. He had in 2017 been arrested trying to travel abroad “to fight for Isis”.

A hunting knife was found in his home, along with “fundamentalist material”.

He was charged with distributing objectionable material. But the second day after he was bailed, he bought another hunting knife and was again arrested.

In July, the Crown sought to charge him under the Terrorism Suppression Act 2002, saying the purchase of the knife amounted to a “triggering act” showing he was engaging in a terror act. Justice Mathew Downs denied this attempt, saying purchasing a knife did not amount to a terror attack under the law.

He was ultimately sentenced to one year of supervision, returned to the community under conditions such as surrendering his Internet devices for police checks.

The Terrorism Suppression Act 2002, passed hastily in aftermath of the 9/11 terror attack, has proven to be faulty – a problem highlighted in 2008 when the Solicitor-General declined to allow police to lay terrorism charges after the controversial Operation Eight raids, in Te Urewera.

The Royal Commission of Inquiry into the Christchurch mosque terror attack was concerned the law lacked “precursor offences”, meaning police could only seek prosecution for terrorism after a terror attack occurred. A key recommendation of the inquiry was the creation of new laws that would criminalise the preparation or planning of a terrorist attack.

After receiving the commission’s report in December, the Government promised to beef up counter-terrorism laws accordingly. The prospective terrorism laws were released in April, gained the support of all but the Green and Māori parties, and as of a month ago MPs were scrutinising the details in select committee.

It takes severe laws to punish severe crimes, and it takes even more severe laws to prevent crimes. Such laws would be powerful, damaging to individual civil liberties, and need to be carefully written and applied.

But reasonable concern was not the reason for delay. The royal commission detailed almost a decade of warnings from officials that the counter-terrorism laws weren’t sufficient.

National leader Judith Collins, as justice minister in 2013, struck a review of the Terrorism Suppression Act off the Law Commission’s work programme in 2013, saying “there does not appear to be any substantial or urgent concerns arising from the operation of the Act”.

The police raised concerns in 2014 and 2015, and “expressed increasing concern about the possible inadequacy of the legislation over this period”. When Ardern entered Government in 2017, she was briefed that it was unclear whether the law was fit for purpose, and she and Intelligence Agencies Minister Andrew Little sought further advice after another briefing in 2018.

And Downs, the judge who declined to charge the man who would become a terrorist, made a point of sending his judgement to Attorney-General, Solicitor-General and Law Commission – another warning the law was not sufficient.

“The absence of an offence of planning or preparing a terrorist act (falling short of existing inchoate [preparatory] offences) could be an Achilles heel,” he said in the judgement.

“However, it is not open to the court to create an offence … The issue is for Parliament.”

Ardern, on Friday evening, was insistent that it was “purely speculative to say whether or not any difference in our law … would have made a difference in this case”.

But it could have given the authorities another tool.

It is very hard NOT to ask questions especially when we take this excellent analysis by James Corbett into account.