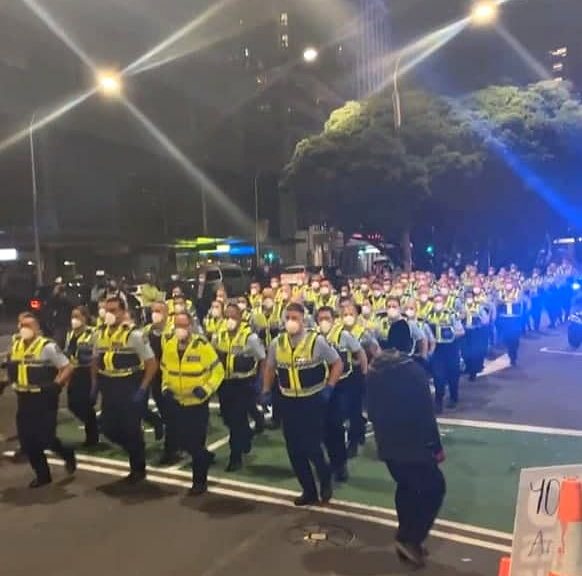 A dawn raid is taking place at Freedom Village, outside Parliament in Wellington, New Zealand.

So far they’ve taken the library. Riot police stand outside. They’ve taken down tents in that area.

About 500 to 600 police are present, Clay Drummond reports.

Police have released a statement saying a pre-planned operation is under way to restore access within the protest area on Parliament grounds. They are advising the public to avoid the area around Parliament this morning.

A nationwide raid/arrest of all the protest camps in Waitangi Park, Wellington, Auckland, Christchurch and Picton is said to be taking place today.

Stuff is covering this here, and NZ Herald here.

I’ve updating my article here as new information comes in.

“KIWI” makes an urgent Call To Action to all good men. Get to FREETOWN Now! And bring your women and children too.

We need everyone here now, to defend the future for our children and grandchildren of our beautiful country.

Make provision to stay and rotate out for as long as it takes. The evil ones are stretched and clearly faltering now. We have the upper hand. Get here no to hold the line!

‘ABSOLUTE FEAR AND PANIC IN THEIR EYES’: POLICE OFFENSIVE AGAINST PROTEST UNDERWAY

Police have moved in to remove protesters from parliament grounds in a major offensive which began early this morning.

From Voices for Freedom

After a long night of keeping watch, in the early morning Wellington protesters have been moved on by police.

These are Kiwis who have already lost so much. They have been stripped of their ability to:

❌️ Participate in sport and recreation with their families,

❌️ Go out for lunch at a cafe or restaurant,

Many have experienced harm from the vaccine and have been denied exemptions from further doses. Others have watched family and friends struggle with their health post-jab, and some have lost loved ones after taking the vaccine. ⚰️😢

These are people simply wanting to go about their lives peacefully; making their own informed choices regarding their health – free from coercion and punishment. 🛂

They want to be able to put food on the table for their families. They want to retain their homes and not be forced to live in their cars with their kids. 🚗

They are in Wellington as a last resort. All other avenues for discussion and debate have been shut down.

The Government refuses to speak to them. They will engage with the Mongrel Mob and the Taliban, but they won’t even TALK with the protestors. 🙅‍♀️

What do the NZ Police do? They bring in the thugs and pepper spray to move everyone along. 🌶

To push this growing section of society out of the public eye.

What a dark day for our country.

But, what the Government and police do not understand is that these people will not be stopped. They are creative and determined to fight for their freedom and the freedoms of ALL New Zealanders. No matter what happens today – this is not over. 🕊