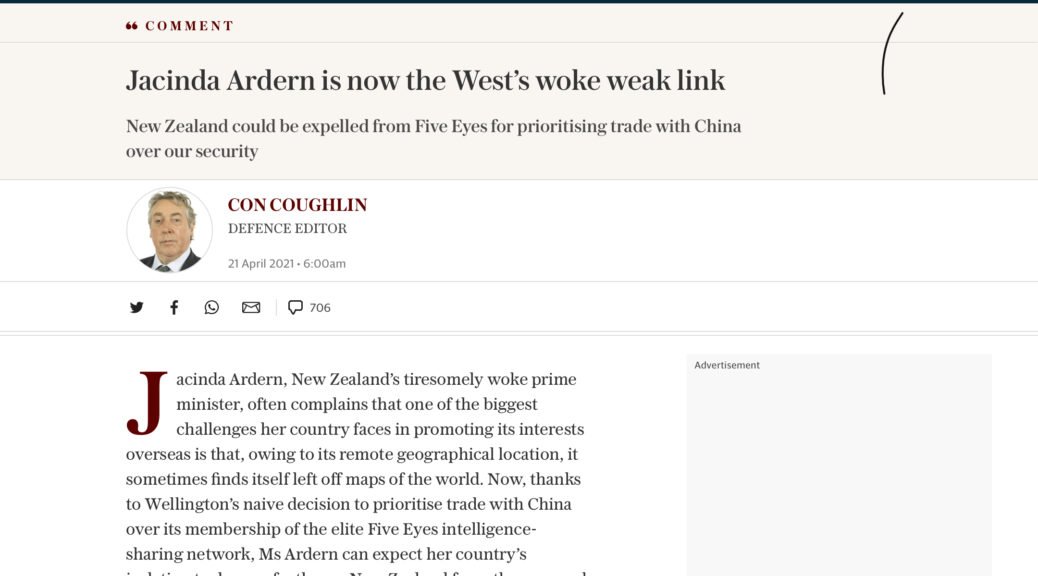 From behind a paywall – an article from the Telegraph.  From their (and the Australian government’s) perspective they are perfectly correct. New Zealand, for reasons that go back 40 years, have been two-timing ever since the corrupt Jenny Shipley was in power in the late 1990’s, right through the governments of Helen Clark (who signed the first Free Trade agreement in the world with China) and John Key. 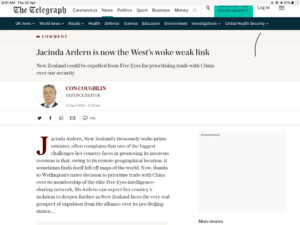 Con Coughlin, Defence Editor
the Telegraph,
21 April, 2021
Jacinda Ardern, New Zealand’s tiresomely woke prime minister, often complains that one of the biggest challenges her country faces in promoting its interests overseas is that, owing to its remote geographical location, it sometimes finds itself left off maps of the world. Now, thanks to Wellington’s naive decision to prioritise trade with China over its membership of the elite Five Eyes intelligence-sharing network, Ms Ardern can expect her country’s isolation to deepen further as New Zealand faces the very real prospect of expulsion from the alliance over its pro-Beijing stance.
The New Zealand Labour leader’s preference for cosying up to China’s communist rulers comes at a time when the consensus among the world’s leading democracies is that Beijing poses the greatest threat to their long-term well-being and prosperity. It is for this reason that leaders of the other members of the Five Eyes alliance – Britain, the US, Canada and Australia – have been pressing for the group to issue a joint communique denouncing Beijing’s suppression of liberty in Hong Kong, as well as its repression of the Uyghur Muslims.
This follows the alliance’s decision last year to expand its remit beyond its core role, dating back to its formation during the Second World War, of collecting and sharing intelligence. The network now also seeks to promote “shared values” on democracy and human rights. Yet attempts by the Five Eyes to present a united front against Beijing have been thwarted by the New Zealand government’s preference for maintaining cordial ties with Beijing.
It transpires that, rather than supporting efforts by other alliance members to hold Beijing to account over human rights abuses, New Zealand has been reluctant to sign joint Five Eyes statements criticising China.
Explaining the decision, the country’s foreign minister, Nanaia Mahuta, says her country is “uncomfortable” with expanding the alliance’s role, and that New Zealand should instead pursue its own bilateral relationship with Beijing. At the heart of it is a desire to forge closer trade ties with China, which presently accounts for 29 per cent of New Zealand exports.
Wellington’s willingness to ally itself more closely with Beijing has also resulted in accusations that New Zealand is not fulfilling its obligations to protect smaller nations in the Pacific, which have been the target of Beijing’s expansionist designs in the region. However, by pursuing such a patently pro-Beijing outlook, Ms Ardern not only risks undermining Western attempts to present a united front against China. New Zealand’s reluctance to cooperate with other Five Eyes members raises serious questions about its continued membership of the alliance.
This is not the first time that the country’s relations with the alliance have been strained. In 2003, serious consideration was given in both London and Washington to ending New Zealand’s Five Eyes membership after Helen Clark, the country’s then Labour prime minister (and Ms Ardern’s political mentor), ordered her country’s intelligence services to scale down their cooperation with Five Eyes because of her opposition to the Iraq war.
Ms Ardern’s ill-judged preference for fostering closer ties with Beijing will inevitably reignite the debate in Western intelligence circles as to whether New Zealand, which has long been regarded as the weakest link in the alliance, should retain its membership.
While New Zealand’s geographical location makes it a good listening post for the Pacific region, the country’s national security focus is much closer to home, and mainly involves curbing the activities of Maori gangs. The calculation for Western intelligence chiefs, therefore, is whether it is worth persevering with New Zealand’s membership when the Ardern administration has a very different set of policy objectives.
Ms Ardern can also expect her pro-human rights credentials to come under closer scrutiny. Previously, Ms Ardern has declared her support for “the values of human rights, social justice, equality, democracy and the role of communities”. How this squares with her aspiration to befriend a Chinese regime that is persisting with its crackdown on Hong Kong’s democracy movement by detaining and imprisoning activists is for the New Zealand electorate to decide.
What is not in doubt is that, by seeking closer ties with Beijing, Ms Ardern risks isolating her country from allies like neighbouring Australia, whose own trading relationship with Beijing has suffered heavily because of Canberra’s criticism of China’s attempts to cover up the origins of the coronavirus pandemic, as well as its assault on Hong Kong.
We live in an age when, as US President Joe Biden has warned, countries that value democracy need to work together to counter the threat posed by authoritarian regimes like China. By choosing Beijing at the expense of her Five Eyes allies, Ms Ardern risks eroding New Zealand’s credibility on the global political map.