File this away with all the other lies Jacinda Adern and her cronies have spoken. 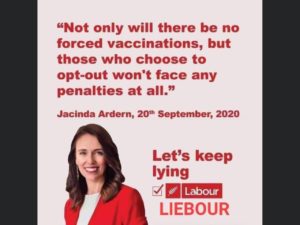 JACINDA ARDERN: “WE ENTIRELY EXPECT THAT PEOPLE WHO ARE VACCINATED, WILL STILL GET COVID-19”

MORE LIES: “HEALTH & EDUCATION WORKERS NEED TO BE JABBED BECAUSE CHILDREN ARE VULNERABLE”

After having met some of the Tauranga port workers last Monday, it is deeply disturbing the way the UN agent, masquerading as the NZ Prime Minister, and a b grade comedian-host, pretending to be a pathetic excuse of a current affairs commentator, make a joke about the port workers & their right to freedom of choice regarding the jab.

It’s this type of subversive propaganda, wrapped up in lame comedy, used by these elitist types, that are used to project superiority over hard-working NZers.

The port workers are being told, “no jab no job”.