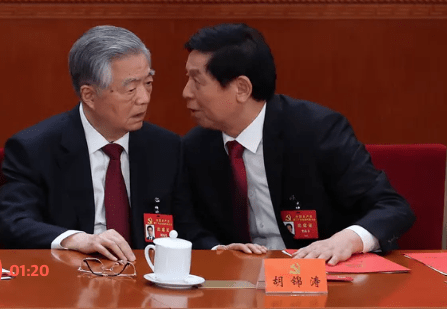 This is Brian Berletic.

I have learned that he has very fixed views when it comes to the CCP.

It seems they can do no wrong.

I do not subscribe to any view that says that because of what is happening to Russia and in Ukraine we are obligated to give full support to its Chinese friends.

I say things exactly as I see them and refuse to be limited by an ideological straitjacket.

This seems are far more believable version of events.

At the closing session of the CCP’s most watched 20th National Congress, former CCP head and Xi Jinping’s predecessor Hu Jintao was forcibly removed from the meeting. This scene has shocked the entire world, and people have been debating about why this happened. In the meantime, Xi Jinping not only gained an unprecedented 3rd term, but also filled the new Stand Committee of the CCP’s Politburo with all his own people. How will this affect us? Today I will talk about this. I will show you some exclusive content I came up with: the timeline of events before and after Hu Jintao’s removal.

This article from the Guardian seems to back her up.

China’s former leader Hu Jintao was arguing about official papers, moments before he was escorted off the stage at a key Communist party meeting in Beijing, new footage shows.

Hu’s apparently reluctant departure from the stage at the 20th congress of the Chinese Communist party (CCP) was a rare moment of unscripted drama at what was otherwise a carefully choreographed week of political theatre.

The new footage, shot by Channel News Asia but only released two days after the incident, captures about a minute of discreet, high-level manoeuvring before an official arrives to escort Hu away. Hu, who is 79, stepped down as head of the party 10 years ago.

The official Xinhua news agency reported that Hu’s unexpected exit was due to ill health, but gave no further details.

That semi-official line did little to quell speculation that what looked like a forced removal – Hu seemed confused and unwilling to leave his seat – was some kind of political power play by his successor Xi Jinping.

The incident was not broadcast in China, and Hu’s name was effectively scrubbed from the internal internet, inside the country’s great firewall.

The name of Hu’s son, Hu Haifeng, was also blocked by Chinese censors, sparking questions about whether there had been some kind of high-level dispute over his position within the CCP.

The images begin with Hu’s neighbour on the podium at the Great Hall of the People, Li Zhanshu, taking a document from Hu’s hand and placing it back under a red cover like the ones in front of all other top leaders, as he talks to Hu.

Initially he leaves papers in front of the former leader, who seems confused. Then apparently concerned that Hu will try to get the document out again, Li pulls the pile of papers towards himself, and keeps his hand on them.

Xi glances towards the side of the stage, apparently summoning help, as a senior aide walks over and talks to him briefly, before heading away.

Li continues to talk to Hu, while Xi stares passively ahead. The young aide who will soon pull Hu from his seat and escort him offstage, arrives, talks briefly to Hu and Li, then goes to talk to Xi for slightly longer.

At this point the footage has caught up with images previously broadcast by other outlets. The aide takes Hu under his arms to help him from his seat.

As Hu left, he tried to pick up the notes of Xi Jinping, his successor and China’s current leader, which lay between them on the table. Xi reached out with his hand to hold the papers down.

Whatever the reason, his very public departure – after journalists had been let in to film the morning session – was humiliating, and carried symbolic weight. The other living former leader of China, Jiang Zemin, is now 96 and had not appeared at the 20th congress of the Chinese Communist party.

Xi has used the week-long gathering to cement his position in the CCP, bolster his personality cult and eliminate rivals. Once Hu had been escorted out, Xi was pre-eminent on the stage, as he now is in Chinese politics.

I almost lost all respect for George Galloway after seeing this (and just about anything he says about China).

He is an ideologue who sometimes says the “right” thing, but often doesn’t.

I stand with the Falun Gong

Here was another report of events at the CCP Party congress

In the 20th Party Congress, Hu Jintao was forcibly removed. The 20th party congress names for government positions was just released… the premier Li Keqiang (vice president), and Wang Yang of his cabinet was removed.
This doesn’t happen in China.
The leadership can do no wrong.
If this is true, this alleged public and symbolic purge, China has just entered a new era of chaos.
Internal fighting, and seizure of power could now mark a new dark era for the Chinese government.
Is the China-Russia relationship a marriage made in Heaven?
I have always been dubious and here are two people that are saying it. China wants more lebensraum and Russia has lots of living space.