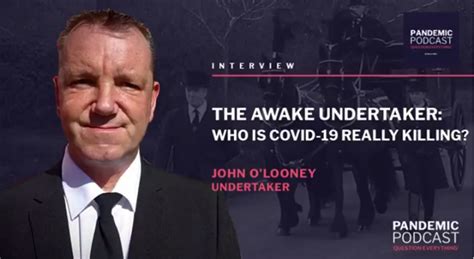 Funeral Director, John O’Looney joins Hearts of Oak to discuss possibly the greatest evil carried out by our authorities for generations.

The rolling out of an experimental vaccine in an impossible timescale was unlikely to end well.

John, working as a funeral director, has been a whistle-blower to the large increase in deaths that he has witnessed.

In this interview he tells us how he tried to raise the alarm with many people in authority but was ignored and met with silence, even MPs seemed uninterested in the mass deaths of the jabbed.

This is a grim tale from a concerned husband and father, one that must be told to all.
Share far and wide.

John O’Looney has been a funeral director in the UK for over 15 years and with his family they run a successful business in Milton Keynes.

John started noticing things were not right in late November 2019 when he saw a ‘blow-up pandemic mortuary’ in a local hospital which he was told was set up in preparation for ‘something really horrible coming’.

In 2021, as the vaccines rolled out, he was witness to a spike of unusual deaths, and while his peers and colleagues in the industry kept quiet, John bravely spoke out and questioned the narrative.

One thought on “John O’Looney – Were Funeral Parlours Overwhelmed by Vaccine Related Deaths?”