I invite you to join me on Telegram. Download

the app, register using your cellphone and find

me using THIS LINK.

You won’t regret it, especially if you are a news junkie!

One Downloaded App In

The two-word Tweet from Elon Musk on Jan. 7 saying “Use Signal” has helped fuel millions in Signal and Telegram downloads. More importantly, Telegram, an instant messaging app with file transfer capabilities, has rocketed to the world’s top app download.

Musk, the world’s richest man, told his Twitter followers of more than 46 million to “Use Signal” last month amid concerns about an updated privacy policy for WhatApp. 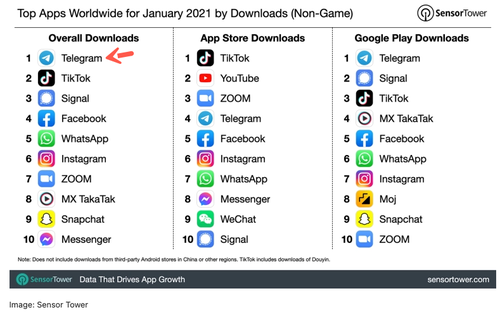 In December, Sensor Tower ranked Telegram at number 9 on the list, with WhatsApp at number 3. WhatsApp has since slid to the number 5 spot.

Sensor Tower estimates Telegram downloads are up 3.8 times from January 2020, with a massive 63 million last month.

Telegram founder Pavel Durov credited Telegram’s success to “consistency” in a post on his Telegram channel.

“For the last 7.5 years, we’ve consistently defended the privacy of our users and regularly improved the quality and feature set of our apps,” he said, suggesting “focused effort [applied] over a long period of time” would bring success, whether it be in “sport, blogging, art, coding, business or studying.”

… and it wasn’t just WhatsApp users migrating to Telegram. Many conservatives have been booted off Twitter, Facebook, and YouTube in an ideologically-driven purge by Silicon Valley, forcing many of them to find a new platform.

From Musk’s tweet to conservatives finding a new home after being purged from traditional social media channels, it appears Telegram last month greatly benefited from the great migration.

In case you’re wondering what makes Telegram so special – well – the company laid it out in a tweet:

Given the fast- moving events of the last few days I have decided to join Telegram.

Parler has been taken down, Gab is quite possibly under threat and there are reports that Apple are removing Telegram from their AppStore and possibly removing it from people’s phones if they have not changed the settings to NOT ALLOW Apple to do so.

I am seeing reports of Trump supporters being taken off planes or put on no-fly zones and today a report that HSCB is closing bank accounts of people who are against the wearing of masks.

Darkness is descending rapidly and Joe Biden and Kamala Harris have not even been inaugurated yet!

For anyone who thinks they might be exempt I would remind them of the following quote:

“In Germany they came first for the Communists,

because I wasn’t a Communist.

Then they came for the Jews,

because I wasn’t a Jew.

Then they came for the trade unionists,

because I wasn’t a trade unionist.

Then they came for the Catholics,

because I was a Protestant.

Then they came for me,

and by that time no one was left

to speak up for me.”

One thought on “Join me on Telegram, the number one downloaded app In the world”