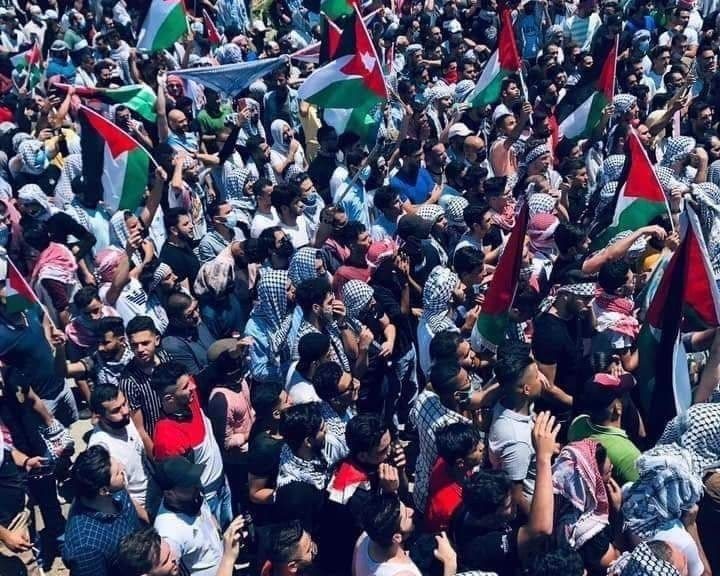 It is al-Nakbar day in Palestine today.

I simply can’t touch this today so this is it. You can find more on my Telegram account

A very serious situation is occurring at the border between Israel and Jordan at the West Bank; troops from both Jordan and Israel are now exchanging gunfire.

After hours of clashes between Jordanian unarmed civilians and US controlled/trained Jordanian security and military forces of Jordan at the borders with the West Bank in the Jordan Valley; the civilians managed to cut the fence and are pouring in to the West Bank for the first time since 1967.

This has caused Israeli Defense Forces to fire shots at those civilians, and in response, the Jordan Army has begun firing at the Israeli troops.

After Israel sent police into the Al Aqsa Mosque to use stun grenades and tear gas, and Israeli courts began using Jewish land claims from PRIOR TO THE CREATION OF ISRAEL to justify evicting Arabs from the Sheik Jarrah quarter, Hamas, which controls the Gaza Strip, started firing rockets into Israel.

That Israeli reaction resulted in Hamas firing upwards of a thousand rockets and newer, more powerful missiles, and unleashing armed drones to strike into many sections of Israel.

Just this week, the Israeli Defense Force admits striking in Gaza a total of six hundred (600) times.  They also say that Gaza has fired “over 1600 rockets” so far this week.

Yesterday, four rockets were fired from Southern Lebanon into northern Israel.  They landed in open fields, away from any civilians and away from any structures.  IT turned out the rockets were launched by Palestinian groups and NOT by Hezbollah, which controls Lebanon.

Experienced watchers of this region say the firing of rockets from southern Lebanon was a not-so-subtle reminder to Israel that they can be attacked from the north, and this warning was designed to stop any Israeli plans for a ground invasion into Gaza.

Today, tens-of-thousands of Iraqis, Jordanians and Lebanese began heading by car, truck or on foot, toward Israel, to help the Palestinians there.  Video below is one such example:

In addition, thousands of SYRIANS have stormed into the Golan Heights to show their outrage at Israeli actions.  Those Syrian crowds are growing larger:

Convoys of vehicles are also moving in Egypt toward the Gaza Strip to assist Palestinians:

It is as close to civil war as any nation can get without an open declaration.  Civil society is taking sides in this latest Israeli-Palestinian Gaza fight situation, and the engagement of civilians on both sides in ripping away civility in many areas of Israel.

In fact, expert observers say the fighting taking place between Arabs and Israelis in so many cities, is doing far more damage to Israel than anything the Palestinians in Gaza have done.   Israeli society seems to be falling apart, violently.

Intelligence experts are carefully watching what Hezbollah is doing in Lebanon.  If Hezbollah decides to enter the fray between Israel and Gaza, that would effectively mean that Iran would be engaged, because Iran funds and arms Hezbollah; and that would be an existential threat to the state of Israel.

Should Hezbollah engage, the United States may be asked by Israel to engage.   If the US does so, then Russia would have a thing or two to say about that and the Russians might choose to engage as well – albeit in support of Iran/Hezbollah/Palestinians.

Then too, with Jordan Army troops exchanging gunfire with Israeli Army Troops, that’s another flash point in and of itself.

Finally, Egypt announced they would re-open the Raffah crossing to evacuate injured from Gaza.  Egypt made clear they are sending Red Crescent workers through that crossing and those workers are operating Egyptian army vehicles/jeeps.   Egypt went out of its way to make clear that any attack upon any Red Crescent vehicles would be deemed an attack upon the Egyptian military requiring a response.

This situation has the very real potential of exploding into vast warfare on little or no notice.

UPDATE 12:56 PM EDT — Riots are now being reported at Damascus Gate in Jerusalem.

Egypt announced that if the attacks on Gaza are not stopped, relations with Tel Aviv will be suspended.

Moments ago in Gaza: As of Now Israel has Declined US Envoy’s Offer of Ceasefire. Right now Israel is refusing to negotiate a ceasefire, rejecting efforts of the UN, US and the Egyptians.

Israel: “There will be no ceasefire with Hamas.”

Hamas: “We refuse any ceasefire with Israel and we will fight to the end.”

Hamas-run Health Ministry in Gaza says 126 killed, including 31 minors, and 950 wounded from IDF strikes so far THIS WEEK.

Palestinian Health ministry: 6 killed and 91 wounded in today’s rioting in the West Bank.

At 5:00 PM eastern US Time, it became May 15 in Israel, which is Nakba Day for the Palestinians.

Armed clashes reported at a number of Israeli checkpoints in the West Bank:

– Near the settlement of “Ziv” in Yatta.

– Near the “Himesh” settlement in Jenin.

– near the Jalma checkpoint.

– Near the Annab checkpoint in Tulkarm.

A Jordanian has been killed now at the Jordanian border

Rocket barrage has been just launched from Gaza

Lebanese resistance movement Leader: – “We Lebanese have joined this war after being summoned by our brothers in Jerusalem. And we will not stop until the Al Aqsa Mosque is liberated and the invasion of Sheikh Jarrah is stopped.”

UPDATE: IDF: “Recently, an IDF aircraft attacked the operational office of the head of Hamas security forces in Ramel, Tawfiq Abu Naim, who served as a military infrastructure for conducting the fighting.”

Biden Pulls ALL US TROOPS From Israel

CONFIRMATION: Pentagon pulls US military personnel from Israel ‘out of caution’

During a press conference, Defense Department Secretary John Kirby said the US Central and European Command staffers flew on a C-17 aircraft in order to prepare for the pickup.

Maximum Alert on Israel’s borders with Lebanon, Syria and Jordan. Massive troop movements have been reported in the areas.

Confirmed the launch of missiles a few hours ago from Syria.

Israeli troops and tanks near the border with the Gaza Strip, but not actually inside – as many outlets erroneously reported, May 14, 2021. ©  REUTERS/Baz Ratner

Israeli press has suggested that the strangely worded IDF announcement about ground troops in Gaza was deliberate, causing major outlets to report fake news – and Hamas militants to go exactly where Israeli military wanted them.

Shortly after midnight on Friday, Israel Defense Forces (IDF) tweeted that “air and ground troops are currently attacking in the Gaza Strip.” This led a number of outlets – such as the New York Times, the Wall Street Journal, AFP and NPR –  to report that Israeli soldiers have actually entered the Palestinian-controlled territory, from which Hamas and Islamic Jihad militants had been launching rockets over the past week. Here’s the Washington Post, for example:

Two hours later, however, the IDF issued a “clarification”: there were no ground troops in Gaza, and never had been.

Officially, the confusion was due to “internal miscommunication,” IDF spokesman Lieutenant Colonel Jonathan Conricus told reporters on Friday. “These things can sometimes happen in the midst of a complex operation with many moving parts and with an unclear picture of what was happening,” he said. “As soon as I understood that I had the wrong information, I updated the relevant people with a clarification.”

ALSO ON RT.COMIsrael DENIES sending ground troops to Gaza as cross-border attacks intensifyOr Heller, a military correspondent for Israel’s Channel 13, says otherwise. “It was a manipulation. It was smart and it was successful,” he said, according to AP. “What we saw tonight was a very sophisticated operation that had a media aspect to it.”

According to Heller, the reports led Hamas fighters to make for the underground tunnels that Israelis call “the Metro,” from which they hoped to emerge and ambush the invaders. The IDF used 160 airplanes and artillery to target the tunnels, bombing them for around 40 minutes – and apparently inflicting heavy casualties on the militants.

During a conference call with a number of outlets on Friday, Conricus reportedly said there was no attempt “to try to fool anybody or to cause you to write anything that isn’t true,” adding that he “can understand that it may look differently.”

He did admit the IDF was trying to deceive Hamas with tactics like massing armor near the border with Gaza. The “target audience” of that wasn’t the press but “hopefully the dead terrorists that are now lying inside the tunnel,” he said.

“What the IDF wanted to create was a situation where they went down into the tunnels so that we could attack them,” he said. The twist? His quote came from an off-the-record call, a recording of which was obtained by the New York Times from another outlet.

ALSO ON RT.COMIDF announces Israeli GROUND TROOPS now ‘attacking’ Gaza Strip amid fears of imminent invasionWhat’s interesting is that outlets that relied on IDF’s tweet verbatim – rather than Conricus – did not jump to conclusions, but reported that Israeli tanks and artillery began striking Gaza alongside the drones and jets already used in the conflict.

For example, RT’s Paula Slier reported that artillery units from Israel’s Golani Brigade were “shooting into Gaza from the border, but have not crossed over.”

Reporters who asked Conricus, however, were told otherwise. Wall Street Journal’s Felicia Schwartz tweeted that the colonel told her directly “there are ground troops in Gaza” before retracting that – two hours later.

It wasn’t just Western media that misreported the story. Judah Ari Gross of the Times of Israel said he was “told unambiguously that Israeli troops had entered the Strip, despite this not being the case.”

“Yes. As it’s written in the statement: Indeed, ground forces are attacking in Gaza. That is that they are in the Strip,” Gross said Conricus had told him.

Weaponizing information is hardly a novelty. “All warfare is based on deception,” ancient Chinese strategist Sun Tzu wrote 2,500 years ago. In these times of ‘5G’ warfare that’s mainly psychological, fake news is intended to disarm the adversary mentally before any shots are fired, to ensure they aren’t to begin with.

Apparently, this kind of media manipulation has a role to play even once the shooting starts. If the IDF really deliberately misinformed reporters, foreign and domestic, about its activities in Gaza in order to trick Hamas into a trap – as Heller claims and outlets like Jerusalem Post suggest may have happened, that means war reporters caught on the “kinetic” battlefield have one more headache to worry about.

Smoke and flames rise from a tower building as it is destroyed by Israeli air strikes amid a flare-up of Israeli-Palestinian violence, in Gaza City © Reuters