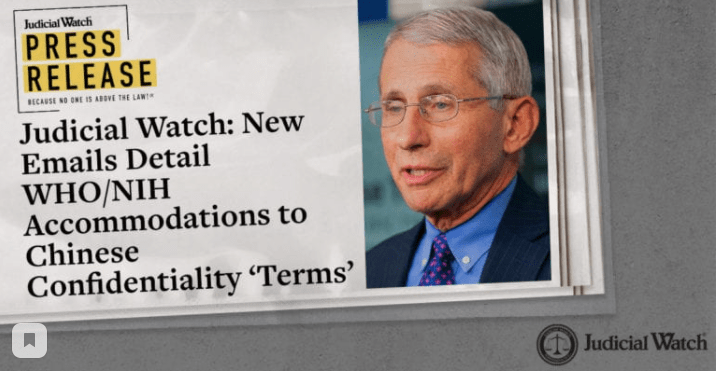 (Washington, DC) Judicial Watch announced today that it and the Daily Caller News Foundation (DCNF) received 301 pages of emails and other records of Dr. Anthony Fauci and Dr. H. Clifford Lane from the U.S. Department of Health and Human Services showing that National Institutes of Health (NIH) officials tailored confidentiality forms to China’s terms and that the World Health Organization (WHO) conducted an unreleased, “strictly confidential” COVID-19 epidemiological analysis in January 2020.

Additionally, the emails reveal an independent journalist in China pointing out the inconsistent COVID numbers in China to NIH’s National Institute of Allergy and Infectious Diseases’ Deputy Director for Clinical Research and Special Projects Cliff Lane.

The emails were obtained in response to a Freedom of Information Act (FOIA) lawsuit filed in the U.S. District Court for the District of Columbia by Judicial Watch on behalf of the DCNF (Daily Caller News Foundation v. U.S. Department of Health and Human Services (No. 1:20-cv-01149)).

The lawsuit was filed after HHS failed to respond to the DCNF’s April 1, 2020, FOIA request seeking:

The new emails include a conversation about confidentiality forms on February 14-15, 2020, between Lane and WHO Technical Officer Mansuk Daniel Han. Han writes: “The forms this time are tailored to China’s terms so we cannot use the ones from before.”

A WHO briefing package sent on February 13, 2020, to NIH officials traveling to China as part of the COVID response ask that the officials wait to share information until they have an agreement with China: “IMPORTANT: Please treat this as sensitive and not for public communications until we have agreed communications with China.”

In an email dated January 20, 2020, a WHO official discusses the epidemiological analysis they conducted of COVID-19 earlier that month and states that it is “strictly confidential,” is “only for,” the Strategic and Technical Advisory Group for Infection Hazards (STAG-IH), and “should not be further disseminated.”

In an email dated March 4, 2020, from Chinese journalist Zeng Jia to Lane, a reporter for Caixin Media, points out to Fauci deputy Cliff Lane that the number of cases reported in the WHO Joint China Mission’s report are inconsistent with the number reported by the Wuhan Public Health Committee:

It says on Page 6 [in the WHO report] that there was at least one clinically diagnosed case of coronavirus on December 2th, 2019, in Wuhan; and from Jan 11th to 17th there were new clinically diagnosed and confirmed cases every day in Wuhan, which is not consistent with Wuhan Public Health Committee’s numbers.

In an email dated February 15, 2020, Gauden Galea, head of the WHO office in China, informs the joint mission members traveling to China that all of their activities in China would be arranged by the Chinese Government’s National Health Commission.

“These emails set the tone early on in the coronavirus outbreak. It’s clear that the WHO allowed China to control the information flow from the start. True transparency is crucial,” said Ethan Barton, editor-in chief for the Daily Caller News Foundation.

On September 22, U.S. District Court Judge Dabney L. Friedrich ordered HHS to begin processing responsive records. In a September 21 court filing, HHS said the agency could begin producing 300 pages of responsive records to the DCNF beginning on November 30, eight months after receiving the Daily Caller’s FOIA request. The total number of responsive records is approximately 4,200, which would have pushed off the full release of the records until at least 2022. HHS also alleged that Fauci must personally review each one of his emails before they are released.

The documents are published HERE

Authored by Steve Watson via Summit News (emphasis ours), 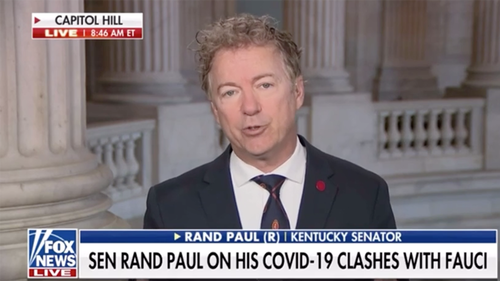 Paul was attacked by leftist media Wednesday for merely questioning Fauci’s extensive role in granting funding to the Wuhan Institute of Virology at a Senate hearing.

CNN’s Anderson Cooper declared that Paul should “have more respect at least for medical science.”

Paul hit back, noting that Fauci is lying about the NIH’s involvement in funding of the Wuhan lab.

Now in a further appearance on Fox And Friends, Paul has gone even deeper, accusing Fauci of being personally to blame for the global pandemic.

“The person they hired to investigate the lab for the WHO perspective is the guy who gave the money,” Paul urged.

“So NIH gave the money to EcoHealth. The head of EcoHealth – they got him to investigate whether Wuhan was doing anything inappropriate in their lab. But if they were then wouldn’t he be culpable?” The Senator questioned.

“Doesn’t he have a self interest in smoothing things over,” Paul continued, adding “I’m not saying he did cover things up but you wouldn’t appoint someone who is in the line of the supply chain of giving the money to them.”

As Infowars reported in April 2020, the NIH awarded a $3.7 million grant to the Wuhan Institute of Virology to conduct coronavirus gain of function research.

Additionally, the results of the US-backed gain of function research at Wuhan was published in 2017 under the heading, “Discovery of a rich gene pool of bat SARS-related coronaviruses provides new insights into the origin of SARS coronavirus.”

Fauci has come under increased scrutiny as the NIH’s involvement with the Wuhan lab is being called into question.