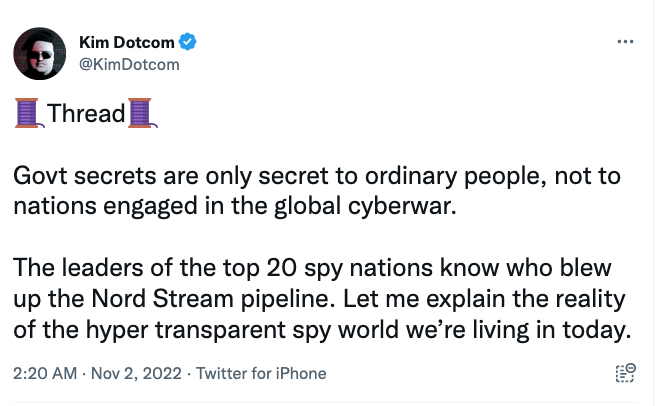 There is a very interesting thread on Kim Dotcom’s Twitter account.
He has become centre of this whole affair.
789 views

Govt secrets are only secret to ordinary people, not to nations engaged in the global cyberwar.

The leaders of the top 20 spy nations know who blew up the Nord Stream pipeline. Let me explain the reality of the hyper transparent spy world we’re living in today.

“Top secret” means nothing to the top spy agencies in the world. Secrecy exists to keep citizens in the dark. Russia and China know exactly who blew up the Nord Stream pipelines because in todays world it’s impossible for an operation like that to leave no trace. Let me explain:
All big tech databases are backdoored by every major spy agency. Every smartphone is an open mic to them. Every computer that is connected to the net is wide open. All major chips and most hardware is trojanized. All the data that one spy agency collects is stolen by the others.
All leaders of nations are targeted by spy tech and not one of them, not even the US President, isn’t spied on successfully 24/7 by multiple foreign and domestic agencies. Even the encrypted devices that spy agencies give to their leaders are backdoored. That’s the reality.
Occasional private conversations in zero tech environments are possible but the rare exception. Something like Nord Stream attack involves hundreds of people from military, agencies and the leadership of multiple countries. Impossible not to have a weak link in such a scenario.
The perpetrators of major events understand that their adversaries know exactly who did it and it’s a game they play against each other at the expense of ordinary people who become victims of stupid dick swinging contests. It’s a secret war that has been going on for decades.
I used to be a hacker, turned data security consultant, hired the top hackers in the world, was paid by Fortune 500 companies to hack them. We never had any client we didn’t hack successfully. That’s the truth. There’s no effective data security at all. Everything is wide open.
Spy agencies with billion dollar budgets have coders in all leading tech companies implementing backdoors. It’s impossible to keep them secret. Competing agencies, cyber criminals and security analysts find them. That’s why you constantly have to install new security patches.
I understand exactly how all of this works and when the NSA cooperated with their New Zealand partner agency GCSB to spy on my devices (in a copyright case) I caught them, exposed them, took them to court, forced a change of the law and the Prime Minister had to apologize to me.
When I’m sharing spy stuff with you I’m not wasting your time like the 50 American spy chiefs who got their presstitutes to tell you lies about the Hunter Biden laptop being Russian disinformation or that Russia hacked the DNC and gave the @HillaryClinton data to Wikileaks. 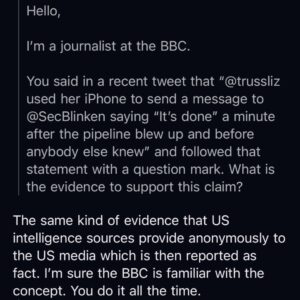 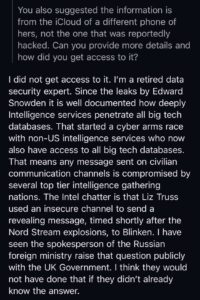 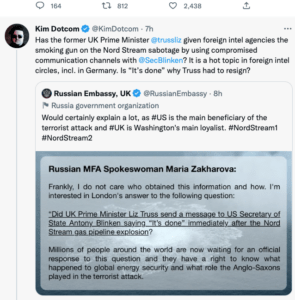 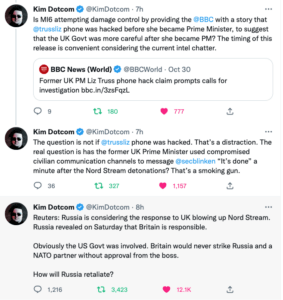