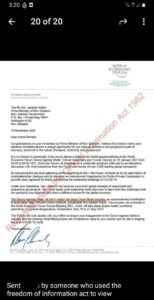 You may wonder what is the connection between these manipulators.

In the Wairarapa Times Age edition of November 13, this article appeared:
“Merkel says people have a duty to get vaccinated”

German Chancellor Angela Merkel said yesterday that people have a duty to get vaccinated against the coronavirus to protect others. Merkel talked for 30 minutes with New Zealand Prime Minister Jacinda Adern in a free-ranging virtual discussion on the sidelines of the annual Asia-Pacific Economic Cooperation (APEC) forum.

Adern said she’s long admired Merkel. Merkel said it was an enormous scientific achievement to produce vaccines within a year of the outbreak, but that officials still weren’t reaching a group of unvaccinated people. “You have the right to get vaccinated,” Merkel said, “but to a certain extent, you also, as a member of society, have the duty to be vaccinated to protect yourself and to protect others. During their discussion, both Merkel and Adern expressed their frustration in the rise of disinformation on social media.

“In the old days we had certain events that happened in our society. Television reported about it and the next day everyone talked about it,” Merkel said.

“Today, everyone participates in his or her own social media. You only engage in a bubble that you meet on the internet.

Adern said one of the lessons she’d learned from the pandemic was to get people and companies engaged with trying to find solutions by presenting them with the data and showing them the problem. She said everybody had been learning about the virus as it spread. “Literally, you’re building the plane whilst trying to fly,” Adern said.

One thought on “Klaus Schwab’s love letter to Jacinda Adern”