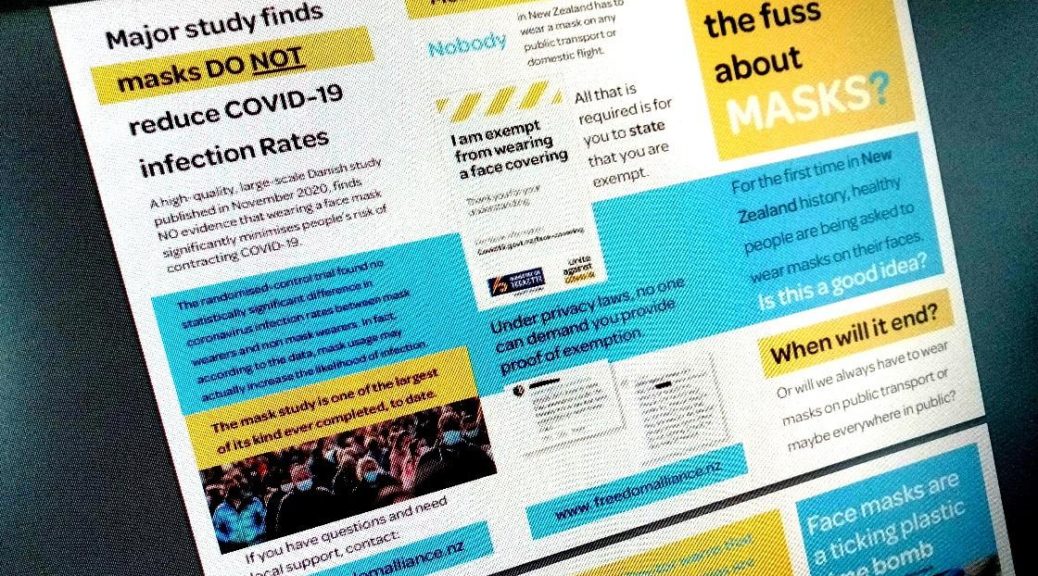 I picked this up from Radio New Zealand.

By Charlotte Cook for RNZ

What’s all the fuss about masks? is the title of an official-looking pamphlet that was being thrust in the face of Wellington train commuters on Wednesday.

The flyer by Billy Te Kahika’s group The Freedom Alliance, perfectly matched the COVID-19 colour scheme, came complete with Ministry of Health logos and even featured the Director-General of Health.

It told commuters all the reasons masks were bad and provided them with an exemption card they were encouraged to use.

At Wellington station people were confused, concerned and supportive of the flyers.

“They should be able to prosecute the people that are doing it. They’re impersonating the ministry, it’s not legal,” a passenger said.

Another commuter planned to read it but would take no notice of the advice, while others refused to take the pamphlet at all.

But some were supportive.

“I don’t really know much, but from what I’ve looked into it’s not black and white whether masks are actually effective, so I think it’s good both sides are being communicated.”

Volunteers for The Freedom Alliance positioned themselves at stations throughout the Wellington region on Tuesday handing out the flyer to commuters at peak hours.

One of them, Mike, a self-confessed conspiracy theorist, admitted he did not know they had not been approved by the ministry and had not actually read it.

He said the exemption card, which he had pinned to his shirt had come from the Ministry of Health and they had worked.

Mike was right – to a point.

Exemption cards can be downloaded from the website but are reserved for people who have a specific medical or health reason for not being able to wear a mask.

The Ministry of Health said the card was only being issued through Healthline and Disabled Persons Organisations for the small number of people with conditions preventing them from using a face covering.

“To help with this, an exemption card has been developed that can be shown when in public if necessary, for example, to transport operators.

“Users are not required to show the card, but they may feel comfortable showing something official that confirms they are exempt from wearing a face covering.

Jacqui Southey came across the group waiting in the dark at a Masterton station – they asked if she had heard “the latest about COVID?”

“I was actually like, ‘well, no I haven’t’, so I accepted this information and carried on up to the main station platform where it was light I started to read and could see that it was a pamphlet basically full of nonsense and propaganda, and appearing to misuse logos and Ministry of Health information to try and look legitimate.”

Southey said once onboard the train conductor announced the information was not official.

Passengers from across the Wairarapa, Lower Hutt and Wellington have reported being given the flyer.

Metlink general manager Scott Gallacher said they found out about the flyers on Tuesday morning and had notified Wellington’s Regional Emergency office, the public health team and the ministry.

“Metlink continues to follow and promote the government’s advice so we can keep all of our valuable staff and passengers safe.”

Gallacher said he hoped the material had not upset or influenced any passengers.