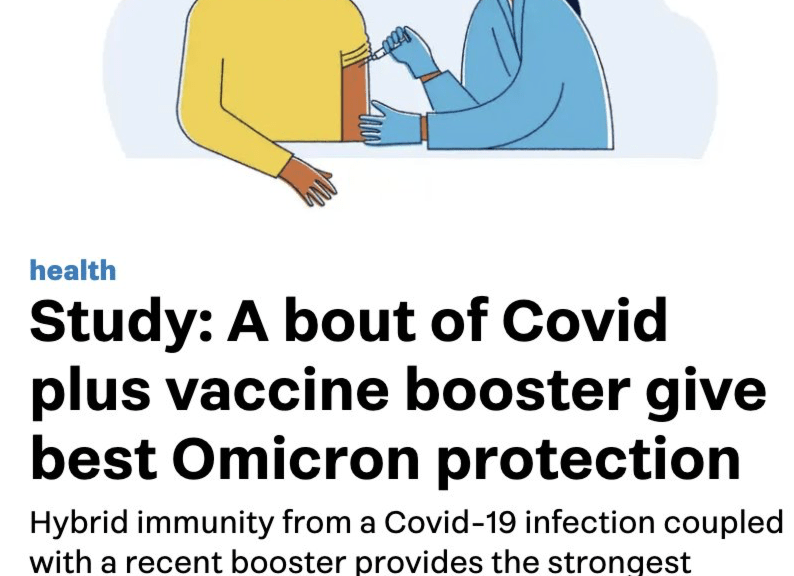 Yesterday, Guy Hatchard penned and article, SHINING A LIGHT IN DARK PLACES, in which he tears apart the government and demonstrates how they use deceit to control the covid narrative.

“This week Dr. Ian Town, chief scientific advisor to the Ministry of Health, announced that the unvaccinated are six times more likely to be hospitalized with Covid than the vaccinated. Dr Town prefaced his remarks with the caveat “the data is reasonably preliminary”. Two weeks ago epidemiologist Dr. Michael Baker told us that the unvaccinated are 9 times more likely to be hospitalized. So who is right, or do you, like me, smell a rat? The answer is neither, and the sleight of hand involved makes for gripping science fiction.”

Here is the said Dr. Ian Town making the statement

Guy points out the lies in an even-minded manner.

I am a bit sharper in my assessment.

In fact, I am livid

It does not take a rocket scientist (or a statistician to realise that this is a contemptible LIE.

It takes only a quick perusal of official MoH statistics (and a dollop of critical thinking) to realise the reality is the direct polar opposite of what they are claiming: the vast majority of cases are amongst the vaxxed, especially the boosted. 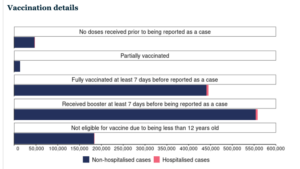 Look how the official statistics hide the reality. They combine the figures for those who are not ‘fully-vaccinated”, which includes those who have the one dose of the jab, those who are ‘ineligible’ (is that children aged less than 5 years old -they don’t tell us – as well as the unvaccinated.

To confirm they are still up to their old tricks with the PCR test.

They stopped the operation of my fully-vaccinated friend because he treated “positive” for Covid even though, with the exception of a bit of a cough, he had no signs of covid, omicron or anything else other than blood clots in his legs.

Guy Hatchard, in his article does not really go into it but there is a big question around their statistics which combine all the ‘fully-vaxxed’- the unvaccinated, those who have presumably had one dose and those “not eligible’.

What this means is anyone’s guess because they don’t tell us.

Anyway, the MoH tells us that the children aged 5 to 11 are definitely ‘eligible’, so does that just leave the babies who if developments in the US are anything to go by, will soon become eligible for the death shot.

Most tamariki aged 5 to 11 are eligible for two paediatric (child) doses of the Pfizer vaccine 8 weeks apart. Some severely immunocompromised children may be eligible for a third child dose. Children are not eligible for a booster.

About the paediatric Pfizer vaccine

Tamariki aged 5 to 11 can be protected against COVID-19 with two paediatric (child) doses of the Pfizer vaccine at least 8 weeks apart. Children are not eligible for AstraZeneca.

Some severely immunocompromised children aged 5 and over may be eligible for a third primary child dose, after consultation with a medical or nurse practitioner.

child formulation of the Pfizer vaccine is a lower dose and smaller volume compared to the adult formulation. The vaccine is administered with a smaller needle.

Children are not eligible for booster vaccinations. Only ages 16+ can have a booster.

This finally confirmed for me that this is not a case of distortion or obfuscation (or just playing round with the numbers) but the likes of Dr. Town and Dr.Michael Baker are actually contemptible liars and criminals.

Not only that but they have the bought-off media spreading the lies.

Two-thirds of hospital patients with Covid-19 there because of the virus, amid heavy demand

It comes as respiratory viruses are putting a “very significant burden” on not just the country’s hospitals, but also primary care.

The rate of reported Covid-19 cases continues to decrease, to 8.3 per 1000 people this week, down from 9.3 the week before. As of Tuesday, 377 people are in hospital with the virus, including seven in intensive care.

Ministry of Health chief science adviser Dr Ian Town said preliminary data suggested about two-thirds of people admitted to hospital with Covid-19 had the virus as their primary reason for admission.

The other third tended to be admitted for non-Covid reasons, who incidentally have the virus.

People who were not vaccinated against Covid-19 also had a more severe course of illness, Town said – and were about three times more likely to end up in intensive care.

Town said the data “really underpins the call” for people to continue to get vaccinated and boosted against Covid-19 where eligible. 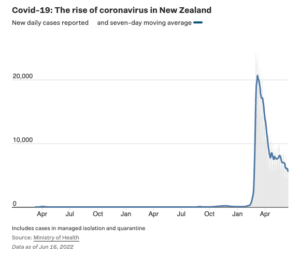 There was “no doubt” hospitals were busy, and the broader system was under demand as was typically seen in winter, Town noted.

Last week, Auckland’s Middlemore Hospital moved to its “red” setting in an attempt to deal with a “frightening” influx of patients into the emergency department – about 400 per day.

Director-General of Health Dr Ashley Bloomfield also acknowledged the country’s hospitals were “under a lot of pressure” at present, with an early surge in respiratory illnesses in the community.

At present, only about 20% of people being admitted to hospital with SARI have Covid-19. Well over half have influenza A, which is “quite rampant” in the community, he said.

“Covid is part of the burden on our system, but we have got these other infections.”

While New Zealand hospitals are not yet seeing RSV patients, the virus was “very much there” in Australia, “so we are watching closely for that”.

Occupancy and capacity constraints would “wax and wane” a bit, and hospitals would see “waves” of being under pressure, he said.

Bloomfield said early data suggested the subtypes covered by this year’s flu vaccine were a good match for those in the community, and implored people to get their flu shot. 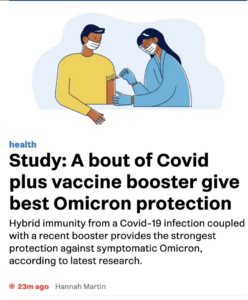 Most COVID patients in NZ’s Omicron outbreak are vaccinated, but that’s no reason to doubt vaccine benefits

New Zealand’s Omicron wave may be peaking, but we’ll continue to record thousands of new cases each day and most people who test positive or are hospitalised with COVID will have been vaccinated.

This is exactly what we should expect and it’s no reason to doubt vaccine effectiveness.

The principal reason why a lot of COVID cases are vaccinated is because most New Zealanders are now vaccinated. As of today, about 94% of people 12 years and older have had two or more vaccine doses, and even if their risk of catching COVID is significantly lower than for an unvaccinated person, they vastly outnumber those who aren’t

Is it any wonder that in the face of these lies and propaganda people fall for it and line up for jabs that are going to rob them  of their health, if not their lives?