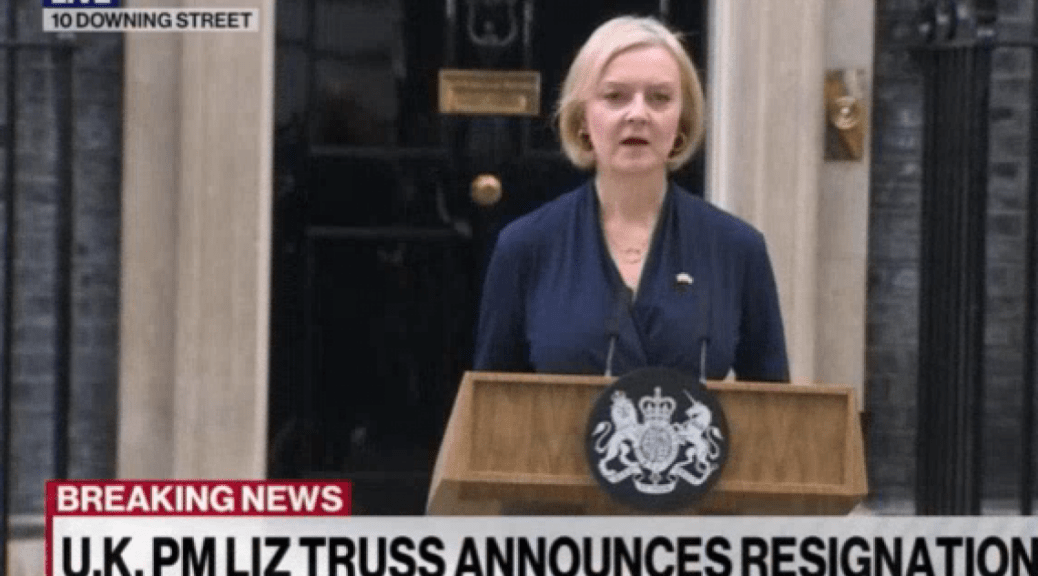 The Duran recorded this discussion BEFORE the announcement.

The UK Is In Free-Fall…

Could they bring BoJo back?

Is Boris heading back to No10? Former PM takes early lead with Rishi Sunak in second as a quarter of Tory MPs declare their support in race to replace Liz Truss – candidates need at least 100 backers by MONDAY as battle ‘for soul of the party’ intensifies

Boris Johnson is currently the most popular choice among Tory MPs to become prime minister as the race to replace Liz Truss roared into life today following her humiliating resignation after just 44 days in power.

With a quarter of MPs declaring support for their preferred candidates, Mr Johnson currently counts 38 backers, compared to Rishi Sunak’s 27 and Penny Mourdant’s 12, according to the latest tally by Guido Fawkes.

It comes after the Conservative Party announced would-be successors would need to win nominations from 100 MPs to get on the ballot.

The threshold means that realistically a maximum of three can make it into a vote, and that there could be a simple coronation of a winner if they get far more than that.

The former chancellor was in his constituency of Richmond in North Yorkshire – some 250 miles away from Westminster – when Miss Truss resigned.

He faced accusations of backstabbing Mr Johnson after his resignation from Cabinet triggered the former PM’s downfall.

Mr Sunak is expected to be among several colleagues who will spend the weekend vying to win the support of Tory MPs before nominations close.

Miss Mordaunt, the Leader of the Commons, is also expected to run after coming third in the last contest.

The former defence secretary previously faced criticism for her ‘woke’ views on trans rights, and was warned against running by colleagues last night.

One said her views on trans rights would ‘put a lot of people off’ and suggested she lacked experience for the top job.

Around half a dozen MPs had publicly backed Miss Mordaunt on Thursday night, including Digital Minister Damian Collins, who said she has the ‘quality and experience to unite the party and rebuild trust in government’.

Allies of Mr Lewis said last night that he ‘hasn’t made any decisions’ but MPs were ‘turning towards him in a way that we haven’t seen before’.

Newly-appointed Home Secretary Grant Shapps ruled himself out of the race.

Earlier, Sir Graham Brady said that after talks with the board of the Conservative Party and the executive of the 1922 Committee of Tory backbenchers that he chairs, nominations begin straight away and will close at 2pm on Monday.

‘We fixed a high threshold but a threshold that should be achievable by any serious candidate who has a prospect of going through,’ he told reporters outside Parliament.

Party chairman Sir Jake Berry said Conservative HQ will be working with broadcasters to arrange one broadcast event so members can hear from the final two candidates – if there are two – before they vote.

Ms Truss dramatically admitted defeat and announced she is quitting as PM today, with Westminster gearing up for Mr Johnson and Rishi Sunak to do ‘battle for the soul’ of the party.

As Ms Truss time in power came shuddering to an ignominious end:

While Mr Johnson has been publicly backed by some MPs to run to return to power, including his former culture secretary Nadine Dorries, several others said they don’t believe he will reach the threshold.

One said the ‘brutal truth’ is he is likely to get no more than 60 – leaving some of his close friends to advise him not to run. He also remains on holiday in the Caribbean and faces a race against time to return and launch an effective campaign.

However in a boost to his chances, the final two candidates will go head-to-head in a final online vote by party members next Friday.

Mr Johnson remains popular with the Tory grassroots and could win such a vote, and allies say he would be able to ‘honestly say’ he has a mandate for government, and has the ability to ‘turn the tide and avert the disaster of a Labour government’.

But it remains unclear whether he can reach the 100 threshold, or whether a figure from the Tory right could stand and risk splitting the vote.

Meanwhile, Mr Sunak is preparing his leadership campaign from his constituency in Yorkshire after Truss’s departure gave him a surprise second chance to be prime minister.

The former chancellor has kept a deliberately low profile since he lost to rival Miss Truss in the final round of the last Tory contest on September 5.

But he never fully disbanded his team of backers – and on Thursday night allies including ex-chief whip Sir Gavin Williamson were hitting the phones to drum up support for another run.

In what appeared to be a coordinated effort, more than 20 Tory MPs publicly declared they were backing him.

Allies including former foreign secretary Dominic Raab praised him as the ‘most qualified’ candidate to lead the country through the economic crisis.

Mr Raab said Mr Sunak has the ‘plan and credibility’ to ‘restore financial stability’ and ‘unite the Conservatives’.