Margo reviews methane data from CAMS & NOAA for Saturday, 2/27/21. She also shows the current state of the Arctic and Antarctic sea ice and looks at Climate Reanalyzer and recent earthquakes. Margo shares an article on the recent calving of the Brunt Ice Shelf and shows it on NASA Worldview.

A large iceberg the size of Bedfordshire has broken away from the Antarctic, scientists have revealed.

It comes almost a decade after scientists first detected vast cracks had formed in the shelf which is located in the Weddell Sea section of Antarctica.

The BAS, which has been operating the research station since 2017, said the first indication that a calving event was imminent came in November 2020 when a major crack – called the North Rift – carved its way through the ice.

In January, the rift pushed northeast at up to 1 km per day and eventually an iceberg was formed when the crack widened in the morning of February 26 and split from the rest of the floating ice shelf.

The movement has been relayed back to the research station’s headquarters in Cambridge and scientists will be inspecting satellite imagery when it becomes available.

According to NASA, the crack in the Brunt Ice Shelf was stable for nearly 35 years before it recently began accelerating.

While it is not the largest iceberg to split off from the Antarctic, it is the biggest chunk the Brunt Ice Shelf has lost since observations began more than 100 years ago in 1915.

Britain’s Halley VI Research Station, which monitors the state of the vast floating ice shelf daily, said their team had been preparing for the calving ‘for years’.

BAS director Jane Francis said: ‘Our teams at BAS have been prepared for the calving of an iceberg from Brunt Ice Shelf for years.

‘We monitor the ice shelf daily using an automated network of high-precision GPS instruments that surround the station, these measure how the ice shelf is deforming and moving. We also use satellite images from ESA, NASA and the German satellite TerraSAR-X. 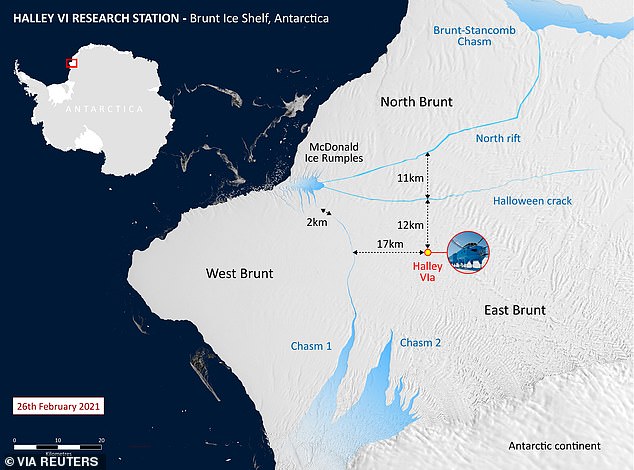 Naive for sure, but a sign that with some people with little understanding of science the truth might be percolating through.

This is from the conspiracy (and almost 100% climate change denial site, Godlike Productions)

BREAKING NEWS: The opening scene from the movie “Day After Tomorrow” is playing out in real life as we speak!!!!!

Here’s the opening scene of the movie. It’s a doomy movie where a bunch of people die.

This is the opening scene, and the start of epic doom unleashing upon the world.

Now here’s real life with the iceberg breaking off. Epic doom will follow


They always have to show us beforehand before they pull the real events. It’s some sort of karma