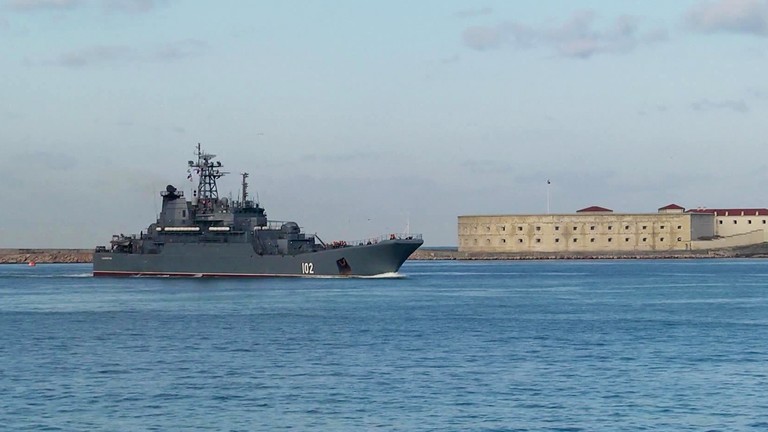 All of the UAVs were shot down over the bay of Sevastopol, Mikhail Razvozhayev claims
A Turkish-made Bayraktar drone of the Ukrainian Armed Forces on display at the Army-2022 expo in the Moscow Region. ©  Sputnik / Evgeny Biyatov

It was the largest attack of this nature on the peninsula since the launch of Russia’s military operation in Ukraine in late February, Mikhail Razvozhayev told journalists.

According to preliminary data, a naval drone was also destroyed off Sevastopol’s coast, Razvozhayev added.

There was no damage to civilian infrastructure as a result of the assault, he said.

Air defense systems were activated in Sevastopol to repel incoming drones from around 04:30 local time, the governor wrote on Telegram.

The attack continued for several hours, with “all of the UAVs being shot down,” he said.

The governor urged the public against posting videos of UAVs or revealing any information related to the attacks on social media, as it could help the Ukrainian military to better understand how the defense of the city is organized.

Ukraine insists it can strike Russia despite US ban

Located in Crimea, which became part of Russia after a referendum in 2014, Sevastopol has been designated a federal city by Moscow due to its strategic importance. The Black Sea port has been a frequent target of drone attacks by Ukraine in recent months.

In July, six people were injured after a UAV crashed into the Black Sea Fleet’s headquarters in Sevastopol. The attack took place on Russia’s Navy Day and led to the cancellation of celebrations in the city. Another UAV hit the roof of the HQ in August, but failed to cause any significant damage.

Ukrainian President Vladimir Zelensky has vowed on numerous occasions that Kiev will regain control of Crimea from Russia. “We will return Crimea by any means that we consider correct, without consulting with other countries,” he said in late August.

Shortly after that, Zelensky’s aide Mikhail Podoliak urged people in Crimea to “prepare a bomb shelter, stock up on a sufficient amount of water and charge power banks right now” in anticipation of “active de-occupation” efforts by Ukraine. However, Kiev’s threats weren’t followed up by action.

Russia has warned that any major provocation against the peninsula will be met with a harsh response. Earlier this month it launched a series of missile strikes against Ukrainian military targets and energy infrastructure after a truck bombing, which Moscow claims was masterminded by Kiev, damaged the Crimean Bridge and killed three people.

The “terrorist attack,” which targeted the vessels of Russia’s Black Sea Fleet and civilian ships docked in the city began around 4.20am local time, the ministry said in a statement on Saturday.

It added that the Russian Navy ships had been involved in providing security for the “grain corridor,” which was set up to allow exports of Ukrainian food products from the Black Sea ports in line with a deal reached between Moscow and Kiev with UN and Turkish mediation in the summer.

All of the incoming drones were shot down by Russian warships and naval aviation in the bay of Sevastopol, the ministry said.

According to the statement, the attack resulted in minor damage to the trawler vessel ‘Ivan Golubets’ and to the net boom barrier in the bay.

“The preparation of this terrorist act and training of the military personnel of the Ukrainian 73rd Special Center for Maritime Operations had been carried out under the supervision of the British experts, based in the city of Ochakov in Ukraine’s Nikolaev Region,” the ministry said.

Information obtained by the Russian military suggests that the same unit of the Royal Navy took part in planning, supplying and carrying out the sabotage of the Nord Stream 1 and Nord Stream 2 pipelines in the Baltic Sea on September 26, the statement read.

Earlier on Saturday, Governor of Sevastopol Mikhail Razvozhayev said it was the largest Ukrainian drone attack on the city since the start of Russia’s military operation in Ukraine in late February.

Located in Crimea, which became part of Russia after a referendum in 2014, Sevastopol has been designated as a federal city by Moscow due to its strategic importance and status as the base of Russia’s Black Fleet. The key port has frequently been the target of drone attacks by Ukraine during the conflict.

In July, six people were injured after a UAV crashed into the Black Sea Fleet’s headquarters in Sevastopol. The attack took place on Russia’s Navy Day and led to the cancellation of celebrations in the city. Another UAV hit the roof of the HQ in August, but failed to cause any significant damage.

Russia announced on Saturday that it has halted its compliance with a grain deal, brokered by the UN and Türkiye earlier his year. The move came after Ukraine launched a major drone attack on ships involved in securing safe passage for agricultural cargo, the Russian Defense Ministry explained.

In a post on its Telegram channel, the ministry said Russia “is suspending its participation in the implementation of agreements on the export of agricultural products from Ukrainian ports”.

It explained that the move was prompted by “a terror attack” against the ships of the Black Sea Fleet and civilian vessels involved in ensuring the security of the grain corridor. The ministry also alleged that the bombing was organized with the involvement of British military.

The UK Defence Ministry has denied any involvement in the Ukrainian drone attack on the Black Sea Fleet in Sevastopol, claiming that Moscow “is resorting to peddling false claims of an epic scale” in an effort to distract the global community from “their disastrous handling of the illegal invasion of Ukraine.”

“This invented story, says more about arguments going on inside the Russian Government than it does about the West,” it added.

“Russian blackmail is primitive across the board: blackmail in nuclear, energy and food field,” he stated, adding that all supposed Russian ploys are “too simple and predictable.”

Earlier on Saturday, Russia’s Agriculture Minister Dmitry Patrushev signaled that Moscow is ready, with Türkiye’s help, to send the world’s poorest countries up to 500,000 tons of grain within the next four next months.

He noted that considering this year’s harvest, Russia “is fully ready to replace Ukrainian grain” and arrange deliveries to “all interested countries” at a reasonable price.

“The grain deal not only did not solve the problems of countries in need, but even aggravated them in a sense. We can see where the ships from Ukraine were heading – Italy, Spain, and the Netherlands. For some cargoes, the share of EU countries ranges from 60 to 100%. These are not the states that are experiencing a real food problem,” the minister said.

Russia earlier warned that it could quit the grain deal if an agreement to ease restrictions on its food and fertilizer exports were not implemented. Moreover, following the blast on the strategic Crimean Bridge, Russian President Vladimir Putin said that if turns out that Ukraine – the country that Moscow accused of carrying out the attack – used grain corridors to transport explosives, “it would put the very existence of these corridors in question”.

The breakthrough deal between Moscow and Kiev was reached in Istanbul in July with mediation by the UN and Türkiye. It aimed to unlock agricultural exports via the Black Sea from Russia and Ukraine – two of the world’s leading grain exporters – which had ground to halt due to the conflict between the two nations.

Hal Turner is pointing to what may come ahead

Today’s attacks upon the Russian naval fleet in and around Sevastopol (Crimea) has set in-motion a completely unexpected series of events.

Not only did Russia CANCEL the Ukraine Grain Passage in the Black Sea, through which grain was shipped to other countries, they have also revealed that communications intercepts prove UK involvement in the planning of the attacks and the targeting of Russian naval vessels.

The UK utilized NATO communication channels in order to do this.

COVERT INTEL inside Russia is now screaming the alarm and reporting that Russia will now commence intentional targeting of any and all NATO facilities within Ukraine, and . . .  get this . . .  “will decide by tonight whether or not to attack NATO Drones over the Black Sea . . . . including US Military surveillance drones” because drones were allegedly used to determine the targeting coordinates for the attacks against Russian naval ships.