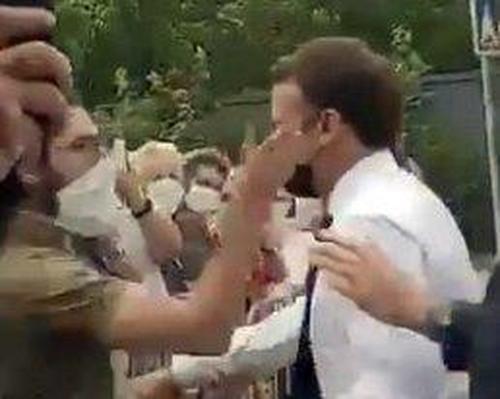 Two men have been arrested after a major security incident at a political event in southeast France on Tuesday. French President Emmanuel Macron was in La Drôme where he met with restaurant and local business owners just ahead of a national easing of COVID-19 restrictions set for Wednesday.

Thinking he was approaching a “fan” behind a metal barrier, Macron walked up to a man in the crowd and grasped his hand, only for the man to then shout in his face, “Down with Macronia” (à bas la Macronie) – according to France24 – while simultaneously delivering a hard slap.

Macron is seen in the video immediately lurching back and being pulled away by his security also as his secret service entourage then tries to jump on the man.

Two men were reportedly arrested in relation to the incident. “A man indeed tried to hit the President of the Republic,” the Elysee told CNN in a statement. “We have no further comments at this point. Exchanges with the crowd and handshakes resumed. The trip continues.”

According to a further description, “Two of Macron’s security detail tackled the man in the green T-shirt, while another ushered Macron away. But Macron remained in the vicinity of the crowd for a few more seconds, and appeared to be talking to someone on the other side of the barriers.”

“The presidential administration said there had been an attempt to strike Macron, but declined further comment,” France24 added.

Within an hour of social media footage of the encounter hitting the internet, it immediately went viral given the extreme rarity of a head of state being assaulted in such a humiliating fashion.

While the attacker’s motives remain unclear, there are reports quoting him as also yelling “Montjoie Saint Denis”, recognized as a historic battle cry of military members under the old French monarchy.