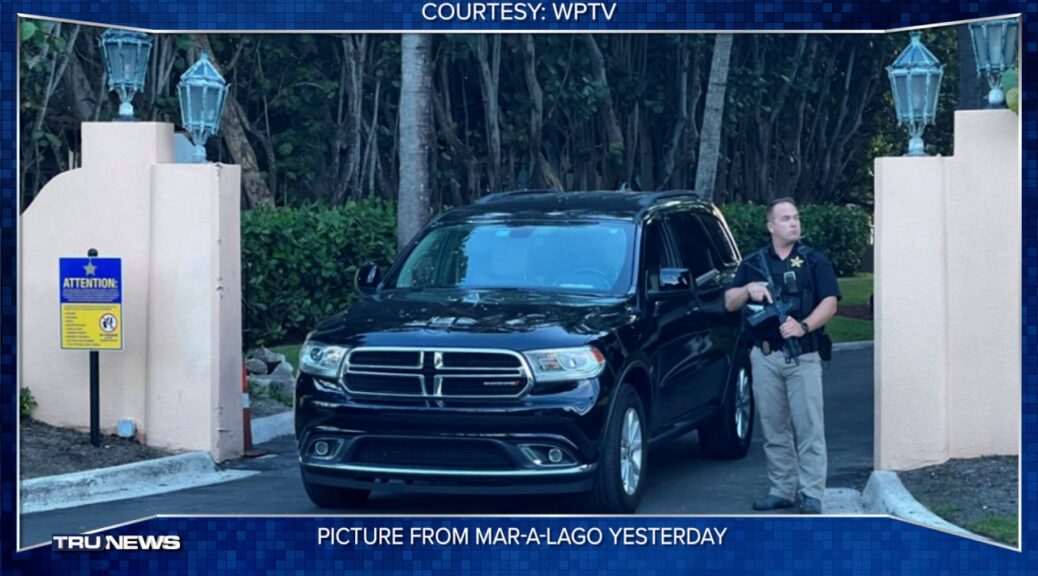 “One thing is certain. If Donald J. Trump was not running for President in 2024 yesterday afternoon, he was running by Monday night. The surprise raid of 20 to 30 armed FBI agents on the former President’s private residence is unprecedented in American history. Everything changed last night. No longer could American citizens assume that former Presidents were safe from political persecution, even imprisonment by extreme opponents. No future president will be confident he or she won’t go to prison for his beliefs and policies. No American citizen can assume he or she is living in a free republic under the rule of law.”

You can be certain that Donald Trump will run for President in 2024. He no longer has a choice.  He must run to prove that American citizens cannot be silenced by far left commiecrats who work for the China communist party.”

Donald Trump has put out the following

A NATION IN DECLINE

DONALD TRUMP ANNOUNCES MAR-A-LAGO “RAIDED, UNDER SIEGE, AND OCCUPIED” BY THE FBI

Moments ago, Donald Trump – who is still banned by Twitter – published a statement on Truth Social in which he said that his Florida home, Mar A Lago is “currently under siege, raided, and occupied by a large group of FBI agents“, an assault which according to Trump “could only take place in broken, Third-World Countries.” He is probably right. He also claims the Fed’s presence was unannounced and the reason was politically motivated.

His full statement posted on his Truth Social account is below:

Statement by Donald J. Trump, 45th President of the

These are dark times for our Nation, as my beautiful home, Mar-A-Lago in Palm Beach, Florida, is currently under siege, raided, and occupied by a large group of FBI agents. Nothing like this has ever happened to a President of the United States before. After working and cooperating with the relevant Government agencies, this unannounced raid on my home was not necessary or appropriate. It is prosecutorial misconduct, the weaponization of the Justice System, and an attack by Radical Left Democrats who desperately don’t want me to run for President in 2024, especially based on recent polls, and who will likewise do anything to stop Republicans and Conservatives in the upcoming Midterm Elections. Such an assault could only take place in broken, Third-World Countries. Sadly, America has now become one of those Countries, corrupt at a level not seen before. They even broke into my safe! What is the difference between this and Watergate, where operatives broke into the Democrat National Committee? Here, in reverse, Democrats broke into the home of the 45th President of the United States.

Hillary Clinton was allowed to delete and acid wash 33,000 E-mails AFTER they were subpoenaed by Congress. Absolutely nothing has happened to hold her accountable. She even took antique furniture, and other items from the White House.

I stood up to America’s bureaucratic corruption, I restored power to the people, and truly delivered for our Country, like we have never seen before. The establishment hated it. Now, as they watch my endorsed candidates win big victories, and see my dominance in all polls, they are trying to stop me, and the Republican Party, once more. The lawlessness, political persecution, and Witch Hunt must be exposed and stopped.

I will continue to fight for the Great American People!

Local reporters confirmed the raid, saying the FBI executed a search warrant at Mar-a-Lago. “They just left,” although it isn’t clear what the search was about.

According to the New York Times:

The search, according to two people familiar with the investigation, appeared to be focused on material that Mr. Trump had brought with him to Mar-a-Lago, his private club and residence, after he left the White House. Those boxes contained many pages of classified documents, according to a person familiar with their contents.

Mr. Trump delayed returning 15 boxes of material requested by officials with the National Archives for many months, only doing so when there became a threat of action being taken to retrieve them.

As Techno Fog notes, the politics of the search can’t be ignored. If the New York Times is to be believed, Trump’s purported crime – the delay of returning materials – could have been resolved in another manner not involving raiding his home and breaking open a personal safe. No doubt the search is an escalation by a desperate Regime confronted by their own failures at home and abroad.

This doesn’t necessarily mean there wasn’t another reason for the search. Could it have to do with the DOJ’s ongoing January 6 probe (although, given the politicization of Biden’s DOJ, that is no guarantee)? Maybe not, but it might be too soon to tell. Last week there was reporting that a federal grand jury investigating January 6 had issued subpoenas to the Trump White House Counsel, Pat Cipollone, and his top deputy, Patrick Philbin.

According to the author, it is possible that the roadmap for the DOJ comes from the January 6 Committee, “which has poured out the thin gruel of purported criminal charges against Trump, alleging he and others, including attorney John Eastman, could be charged with”:

Each of these counts, as well as the DOJ’s pursuit of Trump and his attorneys and advisors, amounts to the criminalization of politics, or as Technofog puts it, “arguments of law that might fail in the courts are now prosecutable offenses. Attempts to delay a vote count based on novel, and not corrupt, interpretations of the law can put you in prison. Issues surrounding the counting of state results or whether the Vice President can refuse to count electoral votes is a matter to be decided through the civil or political process, not through charges brought by vindictive opponents.”

Meanwhile, we are still waiting for an official comment:

This is what the Democrats think you need to know, courtesy of the HuffPost

‘We did not have notice of the reported action,’ a White House official told Fox News Digital

The White House, Department of Justice (DOJ) and FBI were all silent when asked Tuesday whether Americans deserve to know more about why former President Trump’s residence was raided.

“We did not have notice of the reported action and would refer you to the Justice Department for any additional information,” a White House official told Fox News Digital, repeating a previous statement.

The White House didn’t respond to a follow-up email about whether it believed Americans should be given more information about the raid.

Clinton-linked lawyer says Trump could be barred from re-election after FBI raid, cites US Code

Marc Elias, a top lawyer for Hillary Clinton’s 2016 presidential campaign, said Monday that former President Trump could be disqualified from making another run at the White House in 2024 following the FBI raid of his Florida residence.

FBI agents executed a search warrant of Trump’s Mar-a-Lago property on Monday reportedly seeking classified documents he allegedly took from the White House when he left office in 2021. The search warrant was conducted in connection with the National Archives, according to a senior government official.

This led Elias to cite U.S. Code Title 18, Section 2071 to highlight that Trump could be barred from seeking public office again, as the former president continues to drop hints that he will soon announce plans to seek a second term as commander-in-chief.

The Florida judge who sanctioned the FBI raid on Donald Trump owned Mar-a-Lago resort was once linked to Jeffrey Epstein, reported The Post.

On Monday, Judge Bruce Reinhart signed off the search warrant on the former President’s South Florida estate. Trump referred to it as an “unannounced raid on my home.”

The raid was conducted to find out if Trump took classified records from the White House to his mansion. A federal grand jury is also investigating Trump’s efforts to revoke the 2020 election.

The magistrate resigned from the local US Attorney’s office in 2008 to represent employees of convicted pedophile Epstein.

Epstein was found dead in 2019 while awaiting trial on federal sex-trafficking charges. He had hired a network of distinguished lawyers, including former independent counsel Kenneth Starr.

Epstein had also received immunity in the sex-trafficking investigation of the financier.

According to Reinhart’s official biography, he had “managed a docket that covered the full spectrum of federal crimes, including narcotics, violent crimes, public corruption, financial frauds, child pornography and immigration,” in his 12-year tenure as a federal prosecutor.

Reinhart is one of the three federal magistrate judges working in the West Palm Beach offices of the US District Court for the Southern District Court of Florida.

The judge was assigned two warrant applications on Monday, which were entered into the court system, reported the Miami Herald.

However, they sealed information about the warrants and their targets. Reinhart also issued another warrant on Friday but its contents were confidential.

The judge was accused of breaching the Justice Department’s policies through the use of private information from his previous employment to aid the private sector, Daily Mail reported. He denied all the accusations in a 2011 affidavit.

Reinhart’s ex-colleague later revealed in a 2013 court filing that he had “learned confidential, non-public information about the Epstein matter.”

He responded that the Justice Department dismissed the complaint filed against him for Epstein’s victims.

BREAKING: They CAN’T Hide This Connection To The Raid!

Former New York City Police Commissioner Bernard Kerik has warned that if the FBI’s raid on President Trump’s home doesn’t stop him running in 2024, the deep state will try to assassinate him.

He said he feared the left had exhausted all other efforts to stop the 76-year-old running again and that the “next step” for those seeking absolute control of the US political system would be assassination.

Kerik made the comments in a response to a tweet from former acting Director of the United States National Intelligence Richard Grenell, who blasted the FBI raid as “outrageous” and akin to the actions of “third world dictators.”

Summit News reports: In an appearance on Newsmax, Kerik, who was infamously pardoned by Trump in early 2020 after serving prison time for tax fraud, further stated “I hear people talking, they said the Democrats want this guy so bad that they wouldn’t put assassination behind it.”

“I’m not into conspiracies, I’m not into anti-government rhetoric. This is the first time in my lifetime that I would say I am deathly afraid for Donald Trump. I would not put assassination behind these people,” Kerik further declared.

EXCLUSIVE: Was there a Mar-a-Lago RAT? Retired FBI agent says ‘informant’ likely handed over evidence that led to ‘unprecedented’ raid – and agents wanted documents before ‘they disappeared’

Following the unprecedented FBI raid on the former president’s home, many correlated its timing with the fact Jones’ texts – which were unlawfully obtained by prosecutors during the Sandy Hook trial last week – were recently delivered to the Jan. 6 House Select Committee.

CNN host Erin Burnett, without proof, was among the first in the media to float the possibility Jones’ texts may have led to the raid.

“[The raid] comes on the same day that Jan. 6 Select Committee is now in possession of new text messages, messages that we understand belong to conspiracy theorist and Trump supporter Alex Jones,” Burnett breathlessly reported Monday.

And from the more balanced Ron Paul and Daniel McAdams

Armed Federal agents busted into former President Trump’s Florida house last night, ostensibly to seek classified documents that were to be turned in to the National Archives. What’s behind this unprecedented move? Also today: Biden sends Ukraine $4 billion…to help with their budget! And finally: media races to claim Biden chalking up victories. Why?