Senator Elizabeth Warren is demanding Amazon censor best-selling books because they contain information that challenges the official narrative on coronavirus.

Warren wrote a letter asserting that Amazon was complicit in spreading “COVID-19 misinformation” because it allows people to buy books authored by people like Dr. Joseph Mercola, who has been targeted by the mainstream media as a purveyor of “dangerous” fake news about COVID and vaccines.

“During the week of August 22, 2021, my staff conducted sample searches on Amazon.com of pandemic-related terms such as ‘COVID-19,’ ‘COVID,’ ‘vaccine,’ ‘COVID 19 vaccine,’ and ‘pandemic,’” Sen. Warren wrote in a letter addressed to Amazon’s CEO Andy Jassy.

“The top results consistently included highly-ranked and favorably-tagged books based on falsehoods about COVID-19 vaccines and cures.”

Of course, the claim that these are “falsehoods” is a completely arbitrary assertion made by Warren and her staff, with no objective standard of proof required.

Mercola was again singled out for condemnation.

“[Dr. Mercola] has posted over 600 articles on Facebook casting doubt on COVID-19 vaccines and been subject to multiple federal investigations (with one false- advertising investigation leading to a $2.95 million consumer settlement). But Amazon’s algorithms promoted ‘The Truth About COVID-19’ as a best seller and top result in response to common pandemic-related search terms,” Warren wrote.

As Cindy Harper highlights, Warren’s efforts to have Amazon ban books follows a similar effort by Rep. Adam Schiff, who claimed that 10 per cent of Amazon search results related to vaccines returned “misinformation” (a description again solely determined by Schiff and his staff).

At what point did we enter an era where the very thing that drove scientific progress for hundreds of years – challenging the official orthodoxy – is now treated as heresy?

Putting people on lists with terrorists and sex traffickers before deplatforming them from social media sites is not enough.

Erasing information published by actual doctors and scientific experts that dares to question the ever-shifting goalposts of what “the science” says is also insufficient.

Putin in self-isolation due to Covid cases in inner circle 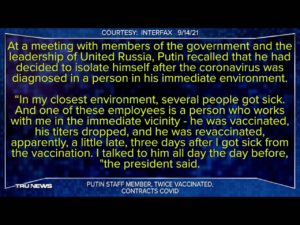 Russian President Vladimir Putin entered self-isolation after people in his inner circle became infected with the coronavirus, the Kremlin said on Tuesday, adding that the leader himself tested negative for Covid-19.

Putin, who is fully vaccinated with Russia’s Sputnik V, held several public engagements indoors on Monday and even said that he may have to quarantine soon. An aide at the time sought to suggest he was speaking generally and insisted on Tuesday that no one’s heath was endangered.

During a daily conference call with reporters, Kremlin spokesman Dmitry Peskov said that Putin is “absolutely healthy” but had come in contact with someone who contracted the virus. Asked if Putin tested negative for the virus, Peskov said “definitely, yes.”

Peskov didn’t say when Putin began self-isolating, when he tested negative, how long he would remain in self-isolation or who among the president’s contacts was infected. He did say there were several cases.