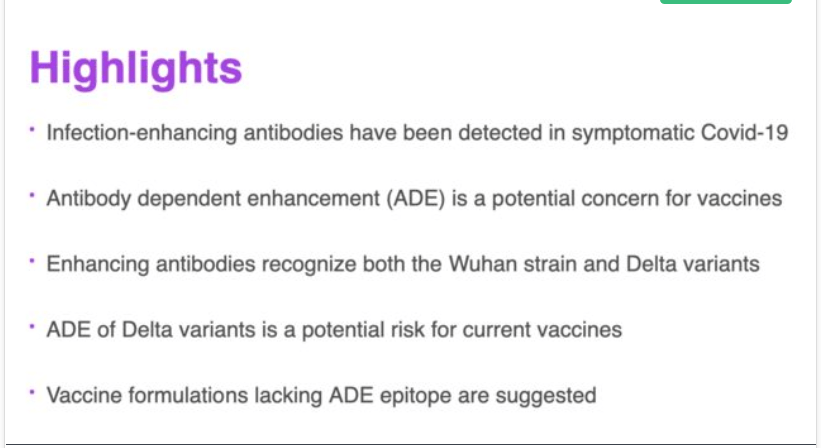 Persons who have been VACCINATED against COVID-19 are now subject to Antibody-Dependent Enhancement which has been so talked about by experts as their worst fear.

Of course this is gobbledygook meant for an in-house audience who will understand exactly what is being talked about and the media will play their role by totally ignoring it. The people who are driving this, right down to the people administering this death shot are committing crimes against humanity that are as serious (although different in many respects) to those committed by the nazis.

Sad to say but every person who has taken the shot (and crowed about it) are headed for death by the very thing they were told they were avoiding.

These people are a direct threat to those who have chose not to have the shot.

Persons who have been VACCINATED against COVID-19 are now subject to Antibody-Dependent Enhancement which is highly likely to . . . kill them.

This is the absolute worst-case scenario with any vaccine.  People who took the vax should be quarantined and isolated immediately.

The “Journal of Infection” is a monthly peer-reviewed medical journal in the field of infectious disease, covering microbiology, epidemiology and clinical practice. Established in 1979, the journal was initially published quarterly by Academic Press. The first editor was Hillas Smith.

On August 9, The Journal of Infection published a peer-reviewed study titled:

This study revealed the terrifying news to the world:

Antibody dependent enhancement (ADE) of infection is a safety concern for vaccine strategies. In a recent publication, Li et al. (Cell 184 :1-17, 2021) have reported that infection-enhancing antibodies directed against the N-terminal domain (NTD) of the SARS-CoV-2 spike protein facilitate virus infection in vitro, but not in vivo. However, this study was performed with the original Wuhan/D614G strain.

Since the Covid-19 pandemic is now dominated with Delta variants, we analyzed the interaction of facilitating antibodies with the NTD of these variants.

This stabilizing mechanism may facilitate the conformational change that induces the demasking of the receptor binding domain. As the NTD is also targeted by neutralizing antibodies, our data suggest that the balance between neutralizing and facilitating antibodies in vaccinated individuals is in favor of neutralization for the original Wuhan/D614G strain.

Thus, ADE may be a concern for people receiving vaccines based on the original Wuhan strain spike sequence (either mRNA or viral vectors).

Antibody Dependent Enhancement (ADE) is every virologists worst nightmare. It means the vaccine does the opposite of what was intended.

“In antibody-dependent enhancement, sub-optimal antibodies bind to both viruses and gamma receptors expressed on immune cells, then promoting infection of these cells.”  In other words, your immune cells themselves BECOME infected and carry the virus.

Vaccinated antibodies will be a trojan horse that gives the virus entry into cells. ALL CELLS. The whole human body.

We will see massive sickness and death within the vaccinated. Boosters will likely make the situation even worse.

Quote: “ Thus, ADE may be a concern for people receiving vaccines based on the original Wuhan strain spike sequence (either mRNA or viral vectors).” Translation: The shot makes a subsequent Infection “strikingly” worse (their words) and everybody was vaxxed using the original strain.

By the way, given that ADE from MRNA in animal trials killed all of them, the word “concern” is a euphemism for “fucking scared.”

Quote: “ the possibility of ADE should be further investigated as it may represent a potential risk for mass vaccination during the current Delta variant pandemic.” Further investigated. Yeah right… when? By whom?  The same Quacks that gave us all this trouble in the first place?

Quote: “ Since the Covid-19 pandemic is now dominated with Delta variants.”

So … this is a “concern” for anyone taking the first shot (actually everyone) as mass vax is a risk for the Delta variant which is now the dominant variety.

The world now has the worst case scenario.  We have it BECAUSE of the vaccine.

It is almost laughable that the study authors say a second, different vax should be developed.   Well . . . . after most of the people who took Vax 1.0 are dead from ADE, do they really think anyone, anywhere, will trust them with Vax 2.0?

Below is a screen shot of the entire study in case someone decides to hide it.

Bottom Line: People who got the vaccine, when they encounter the virus in real life, will not likely survive because their own immune system becomes infected and carries the disease absolutely everywhere in their body.  The immune system itself becomes the actual viral carrier.

DO NOT TAKE THE VACCINE.