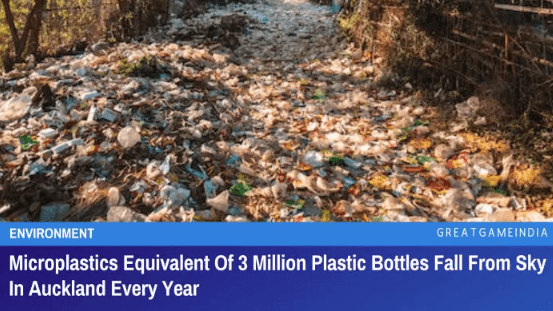 Microplastics equivalent of 3 million plastic bottles fall from sky in Auckland every year. The University of Auckland investigation found that polyethylene (PE) was the main substance found, followed by polycarbonate (PC) and polyethylene terephthalate (PET).

The University of Auckland study (read below), published in Environmental Science & Technology, discovered that the microplastics were so minuscule that they might be inhaled and accumulate in the human body.

The smallest particles, nanoplastics, have the capacity to penetrate cells, traverse the blood-brain barrier, and accumulate in organs such as the testicles, liver, and brain. Plastics have been found in the placenta as well.

“Microplastics have also been detected in human lungs and in the lung tissue of cancer patients, indicating that the inhalation of atmospheric microplastics is an exposure risk to humans,” the paper noted.

The study used a technology that could identify particles as small as 0.01 of a millimeter, and the results showed that the levels of microplastics in Auckland’s air were significantly greater than those recently observed in London, Paris, and Hamburg, researchers claimed.

Lead author Dr Joel Rindelaub said “The smaller the size ranges we looked at, the more microplastics we saw”.

“This is notable because the smallest sizes are the most toxicologically relevant.”

But Rindelaub concluded that studies all over the world had probably drastically underestimated the amount of airborne microplastics.

“Future work needs to quantify exactly how much plastic we are breathing in,” he said.

“It’s becoming more and more clear that this is an important route of exposure.”

Throughout the months of September, October, and November of 2020, the experiment lasted nine weeks.

There are several ways that microplastics infiltrate the environment, and as plastic ages and weathers, it becomes smaller and smaller.

For instance, fibers released by washing synthetic clothing, automobile tire fragments washed into the ocean by rain, and bottles drifting down rivers.

The University of Auckland investigation found that polyethylene (PE) was the main substance found, followed by polycarbonate (PC) and polyethylene terephthalate (PET).

PC is employed in electrical and electronic applications, while PET and polyethylene are used as packaging materials. Additionally, all three are employed in the construction sector.

“Over the last 70 years, 8.3 billion metric tons of plastic have been produced globally,” the paper stated. “Only nine percent have been recycled, with the rest either incinerated or released into the environment.”

The Hauraki Gulf’s waves breaking may also be dispersing water-borne microplastics into the atmosphere, according to the researchers. More microplastics were found when gulf-originating winds picked up speed, which is presumably what caused the waves to grow and increase transmission.

“The production of airborne microplastics from breaking waves could be a key part of the global transport of microplastics,” Rindelaub said.

“And it could help explain how some microplastics get into the atmosphere and are carried to remote places, like here in New Zealand.”

The researchers also discovered that when winds blew over Auckland’s city center, the microplastics downwind were larger, suggesting that the plastics had undergone less environmental ageing and originated from a closer source.

The study, according to the scientists, was the first attempt to estimate the overall mass of microplastics in a city’s air. 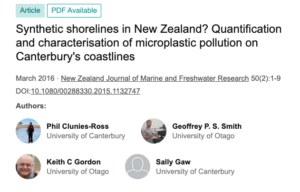