Italy
to Lock Down Milan

Region in Bid to Contain 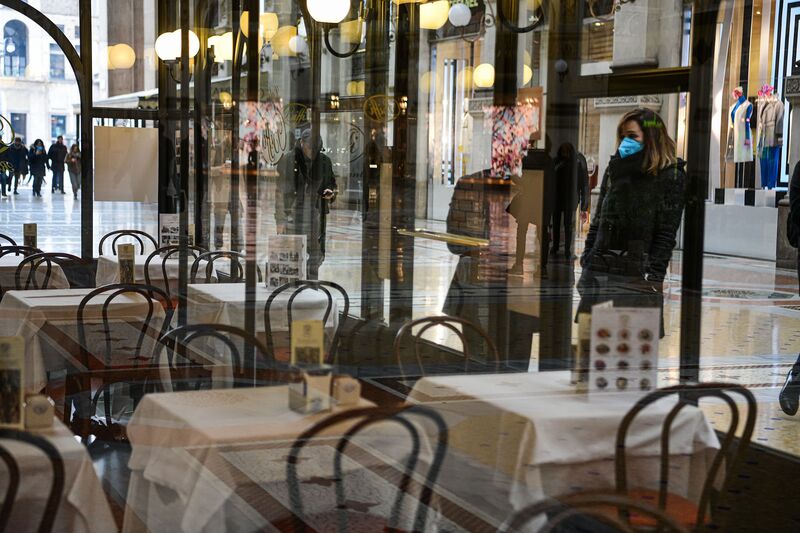 The
Italian government is set to dramatically restrict movement and
activity for a quarter of its population, or about 16 million people,
according to a draft decree seen by Bloomberg.

The
decision to lock down the Milan region and several other northern
areas is the latest step in the effort to contain Europe’s worst
coronavirus outbreak. It comes as cases surged to 5,883 on Saturday
with 233 deaths, and as Nicola Zingaretti, the leader of one of the
two major government parties, announced he had contracted the
illness.

The
measures, set to come into force Sunday and last until April 3, will
stop anyone from entering or exiting the most-affected areas, while
movement inside will be allowed only for “non-deferrable”
business or health reasons, the draft said. Skiing, public events,
religious ceremonies and work meetings will be suspended, while
schools, museums, swimming pools and theaters will close.

Bars
and restaurants will have to make sure patrons keep at least a meter
apart or they’ll be shut. The draft specifies that failing to
respect the measures is a criminal offense, and might lead to
imprisonment. Police and the army will be responsible for ensuring
that containment measures are respected.

The
restrictions will apply across Lombardy and in 11 provinces around
cities including Venice, Modena, Parma, Rimini and Treviso.

A
second draft decree with new containment rules for the rest of the
country, also seen by Bloomberg, recommends citizens avoid travel
outside their hometowns unless absolutely necessary, and restricts
public events. The government is set to approve both decrees in a
meeting Saturday evening.

With
Italy’s economy already at risk of recession before the outbreak,
the crisis has all but paralyzed business activity in Lombardy —
which accounts for a fifth of the country’s gross domestic product
— and the rest of the north, Italy’s economic engine.

The
government decided on Thursday to double emergency spending to 7.5
billion euros ($8.4 billion) to help cushion the economic impact of
the virus. It’s also calling up 20,000 doctors, nurses and medical
personnel to help deal with the outbreak. Fallout from the virus’s
spread is slamming Italy’s key tourism industry at a time when the
country is already teetering on the brink of recession.

The
European Commission’s top economic officials approved Italy’s
spending plans, saying in a letter to the government in Rome that its
stimulus plans won’t be factored in when assessing the country’s
compliance with the European Union’s fiscal rules.

One
case was diagnosed in the Vatican — the tiny walled city-state in
central Rome that is home to Pope Francis and “emeritus” Pope
Benedict XVI.

A
man wearing a protective mask and a nun walk in a deserted St.
Peter’s square at the Vatican on March 6.

Pope
Francis will not celebrate Sunday’s weekly Angelus prayer from the
window of the Apostolic Palace as he usually does, the Vatican said
in a statement.

Francis
will instead hold the event from the library in the palace, to avoid
the risk of the coronavirus spreading among people queuing for
security checks to access St. Peter’s Square, the Vatican said. The
event will be relayed on giant screens and via streaming.