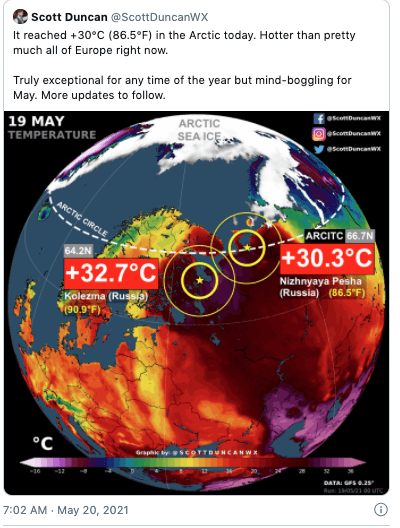 Summary: the chaotic climate that we’ve been experiencing in Europe with unseasonably cold temperatures could be over.

The Polar Vortex has regained its normal spherical shape and most of all its position over the Arctic. I compare it in this video with an image of the polar vortex of 04 may 2021 when there were 4 clusters.

Unlike the following trio I am not longer into confirmation bias but stick to what I can confirm.

First point I would like to make (apart from Kevin Hester’s foul language) is – Guy McPherson is NOT an ecologist.

When I heard the first section on stratification of the oceans (which was indeed new to me) I thought I was going to get some solid science but listening further I found there was usually a critique of the question (do these people have to pay to get a response from their guru?) and a quick two sentence reply.

Where has the science from yesteryear gone?

Seawater generally forms stratified layers with lighter waters near the surface and denser waters at greater depth. This stable configuration acts as a barrier to water mixing that impacts the efficiency of vertical exchanges of heat, carbon, oxygen and other constituents. Previous quantification of stratification change has been limited to simple differencing of surface and 200-m depth changes and has neglected the spatial complexity of ocean density change. Here, we quantify changes in ocean stratification down to depths of 2,000 m using the squared buoyancy frequency N2 and newly available ocean temperature/salinity observations. We find that stratification globally has increased by a substantial 5.3% [5.0%, 5.8%] in recent decades (1960–2018) (the confidence interval is 5–95%); a rate of 0.90% per decade. Most of the increase (~71%) occurred in the upper 200 m of the ocean and resulted largely (>90%) from temperature changes, although salinity changes play an important role locally.

Guy McPherson pointed this out years ago when he was still actively doing science.

Why has the Amazon flipped from carbon sink to carbon source?