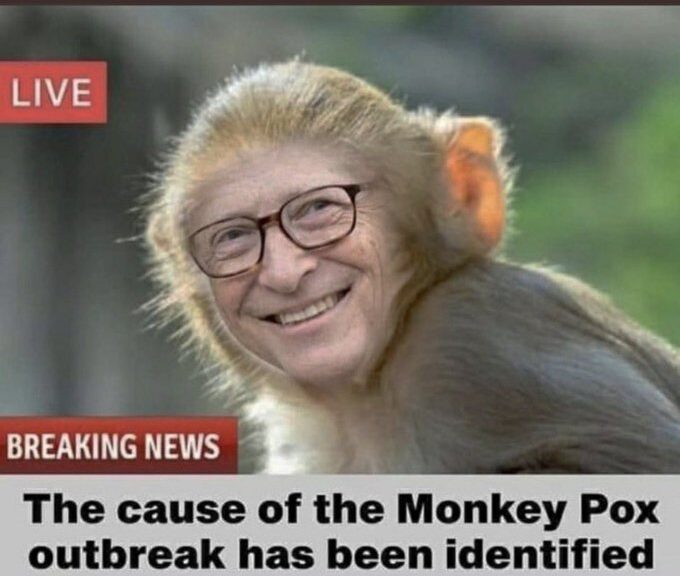 They must’ve had a crystal ball

Notice the closing date – exactly one week before the first monkeypox cases were reported by the WHO.

And if you refuse “safe and effective” smallpox vaccine, Mr. Tam might round you up and put a tracking bracelet on your arm to ensure compliance.

2010: Dr.Theresa Tam advocates round up of those who refuse vaccinations

Its Safe and Effective:

“It is not known whether Jynneos is excreted in human milk. Data are not available to assess the effects of Jynneos in the breastfed infant or on milk production/excretion.”

“Jynneos has not been evaluated for carcinogenic or mutagenic potential, or for impairment of male fertility in animals. Developmental toxicity studies conducted in rats and rabbits vaccinated with Jynneos revealed no evidence of impaired female fertility”.

“Safety and effectiveness of Jynneos have not been established in individuals less than 18 years of age.”

“Forty-two smallpox vaccine-experienced adults 65 to 80 years of age received at least one dose of Jynneos (Study 4).

Clinical studies of Jynneos did not include sufficient numbers of subjects aged 65 and over to determine whether they respond differently from younger subjects.”

Wait until millions of Immunocompromised Covid Jab victims will line up to get smallpox shots to save themselves from a “deadly” monkeyhoax.

God help us all… 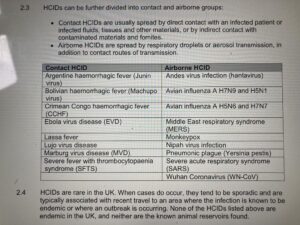 Two corrupt companies were in rocky financial territory just a few weeks ago. Now, with concerns over a global monkeypox outbreak being hyped by media and global health organisations alike, the worries – and sins – of these two companies are quickly being forgotten

In recent days, concern over a global outbreak of monkeypox, a mild disease related to smallpox and chickenpox, has been hyped in the media and health ministries around the world, even prompting an emergency meeting at the World Health Organisation (“WHO”). For some, fears have centred around monkeypox being the potential “next pandemic” after Covid. For others, the fear is that monkeypox will be used as the latest excuse to further advance draconian biosecurity policies and global power grabs.

Regardless of how the monkeypox situation plays out, two companies are already cashing in. As concern over monkeypox has risen, so too have the shares of Emergent Biosolutions and SIGA Technologies. Both companies essentially have monopolies in the US market, and other markets as well, on smallpox vaccines and treatments. Their main smallpox-focused products are, conveniently, also used to protect against or treat monkeypox as well. As a result, the shares of Emergent Biosolutions climbed 12% on Thursday, while those of SIGA soared 17.1%.

For these companies, the monkeypox fears are a godsend, specifically for SIGA, which produces a smallpox treatment, known by its brand name TPOXX. It is SIGA’s only product. While some outlets have noted that the rise in the valuation of SIGA Technologies has coincided with recent concerns about monkeypox, essentially no attention has been given to the fact that the company is apparently the only piece of a powerful billionaire’s empire that isn’t currently crumbling.

That billionaire, “corporate raider” Ron Perelman, has deep and controversial ties to the Clinton family and the Democratic party as well as troubling ties to Jeffery Epstein. Aside from his controlling stake in SIGA, Perelman has recently made headlines for rapidly liquidating many of his assets in a desperate bid for cash.

Similarly, Emergent Biosolutions have also been in hot water. The company, which has troubling ties to the 2001 Anthrax attacks, came under fire just under two weeks ago for engaging in a “cover-up” over quality control issues relating to their production of Covid vaccines. A Congressional investigation found that quality control concerns at an Emergent-run facility led to more than 400 million doses of Covid vaccines being discarded. The Emergent factory in question had been shut down by the FDA in April 2021. They were allowed to reopen last August before the government terminated the contract. Given that the majority of the company’s business is tied to US government contracts, the loss of this contract, and the accompanying poor publicity, the news that its smallpox vaccine may soon be of international interest is likely seen as a godsend by the company.

Notably, this is the second time in a year that both companies have benefitted from pandemic or bioterror fears propagated by the media. Last November, speculation rose that a re-emergence of the eradicated virus that causes smallpox would soon take place. This first began with Bill Gates’ comments on the prospects of smallpox bioterrorism during a 4 November 2021 interview and was followed by the 16 November announcement of a CDC/FBI investigation into 15 suspicious vials labelled “smallpox” at a Merck facility in Philadelphia. Now, roughly six months later, the same fears are again paying off for the same two companies.

It seems the fear being generated around monkeypox is not only boosting shares for these two rotten companies, but it’s also helping the public forget their past sins.

The above is the introduction to Whitney Webb’s article ‘Monkeypox Fears May Rescue Endangered Corporations’ published on Unlimited Hangout. 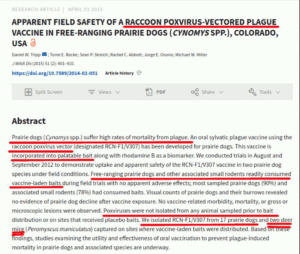 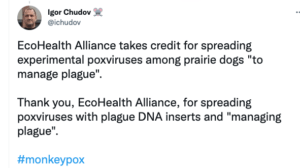 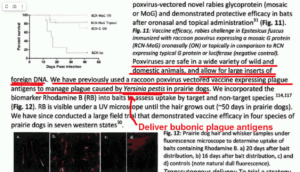 Monkeypox “Preparedness Exercise” has Pandemic Start Date as May 15 2022

There was a monkeypox preparedness exercise held in March 2021.

Guess when the actual monkeypox media hype started this May? Around the same day!

The exercise “simulated” a vaccine-resistant monkeypox outbreak that was a biological warfare attack. Who were the participants? Same old people from the Bill and Melinda Gates Foundation, China CDC, and so on.

Lots of overlap between these participants and the infamous “Event 201” simulation, which also eerily predicted our Covid-19 pandemic. Chris Elias from BMGF, Mr. Gao from China CDC, and possibly more (I will update this paragraph). Here are the Event 201 participants, with the overlap highlighted:

Also check out what “2nd Smarterst Guy in the World” is saying, threadsirish, and the infamous El Gato’s thoughts on monkeypox and even more recent events:

As the UK sees a “significant and concerning”rise of monkeypox in the UK, the NHS has guidance available on its website.

According to the NHS website, monkeypox can be spread by touching clothing, bedding or towels used by an infected person, touching monkeypox blisters or scabs or the coughs and sneezes of a person infected by the disease.

Standard guidance on the NHS website relating to countries where monkeypox is endemic says the infection can also be spread by animals and eating meat although this is mainly liked to animals in west and central Africa. However, it was worth noting that monkypox is not endemic in the UK.

The website says: “Monkeypox can be caught from infected wild animals in parts of west and central Africa. It’s thought to be spread by rodents, such as rats, mice and squirrels.

“You can catch monkeypox from an infected animal if you’re bitten or you touch its blood, body fluids, spots, blisters or scabs.

“It may also be possible to catch monkeypox by eating meat from an infected animal that has not been cooked thoroughly, or by touching other products from infected animals (such as animal skin or fur).”

touching other products from infected animals (such as animal skin or fur).”

Calls for people to come forward for testing

Dr Susan Hopkins, chief medical adviser at the UKHSA, said: “Alongside reports of further cases being identified in other countries globally, we continue to identify additional cases in the UK.

“Thank you to everyone who has come forward for testing already and supported our contact tracing efforts – you are helping us limit the spread of this infection in the UK.

“Because the virus spreads through close contact, we are urging everyone to be aware of any unusual rashes or lesions, and to contact a sexual health service if they have any symptoms.

“A notable proportion of recent cases in the UK and Europe have been found in gay and bisexual men, so we are particularly encouraging these men to be alert to the symptoms.”

Symptoms of monkeypox in humans

A rash usually appears 1 to 5 days after the first symptoms. The rash often begins on the face, then spreads to other parts of the body.

The symptoms usually clear up in 2 to 4 weeks.

Monkeypox Is Merely a Distraction: These People Are Trying Everything They Can To Avoid Being Jailed 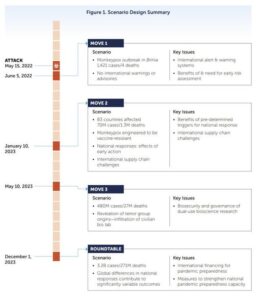 I did not make the connection with Edward Dowd. He is the same Edward Dowd who has made explosive claims about economic collapse

Former BlackRock fund manager Edward Dowd has exploded on the “Team Reality” scene as of March 2022 due to his unique point of view on the unfolding COVID-19 saga. Like many other intelligent professionals from all walks of life, Dowd says he began to suspect something was wrong with “the narrative” early on. In fact, he even assembled a lengthy tweet thread outlining exactly how governments would respond to the “pandemic” in May of 2020 by couching his predictions as part of a “dystopian movie” plot. Then, when the “vaccines” became available to the public, he says he knew immediately something was wrong.