I shall have more to say about monkeypox – but not today.

Health officials confirmed on Wednesday the first case of monkeypox virus infection in Massachusetts this year.

The CDC expressed concern on Tuesday about the monkeypox outbreak in the UK and warned of the possibility that the outbreak could spread beyond U.K. borders.

“We do have a level of concern that this is very different than what we typically think of from monkeypox. And I think we have some concern that there could be spread outside the U.K associated with this,” a senior CDC official told STAT in an interview.

Now, the Massachusetts Department of Public Health (DPH) confirmed the first case of monkeypox virus infection in a male adult who recently traveled to Canada.

Initial testing was completed late Tuesday at the State Public Health Laboratory in Jamaica Plain and confirmatory testing was completed today at the US Centers for Disease Control and Prevention (CDC). DPH is working closely with the CDC, relevant local boards of health, and the patient’s health care providers to identify individuals who may have been in contact with the patient while he was infectious. This contact tracing approach is the most appropriate given the nature and transmission of the virus. The case poses no risk to the public, and the individual is hospitalized and in good condition.

Monkeypox is a rare but potentially serious viral illness that typically begins with flu-like illness and swelling of the lymph nodes and progresses to a rash on the face and body. Most infections last 2-to-4 weeks. In parts of central and west Africa where monkeypox occurs, people can be exposed through bites or scratches from rodents and small mammals, preparing wild game, or having contact with an infected animal or possibly animal products. The virus does not spread easily between people; transmission can occur through contact with body fluids, monkeypox sores, items that have been contaminated with fluids or sores (clothing, bedding, etc.), or through respiratory droplets following prolonged face-to-face contact.

Since early May 2022, the United Kingdom has identified 9 cases of monkeypox; the first case had recently traveled to Nigeria. None of the other cases have reported recent travel. UK health officials report that the most recent cases in the UK are in men who have sex with men.

Based on findings of the Massachusetts case and the recent cases in the UK, clinicians should consider a diagnosis of monkeypox in people who present with an otherwise unexplained rash and 1) traveled, in the last 30 days, to a country that has recently had confirmed or suspected cases of monkeypox 2) report contact with a person or people with confirmed or suspected monkeypox, or 3) is a man who reports sexual contact with other men. This clinical guidance is consistent with recommendations from UK health officials and US federal health officials, based on identified cases.

Suspected cases may present with early flu-like symptoms and progress to lesions that may begin on one site on the body and spread to other parts. Illness could be clinically confused with a sexually transmitted infection like syphilis or herpes, or with varicella zoster virus.

This news comes after four more cases of the monkeypox virus were identified in the U.K on Tuesday. Spain and Portugal detected over 40 suspected monkeypox cases. Multiple cases are also detected in Canada.  FOr now, the disease seems to be affecting Gay males. 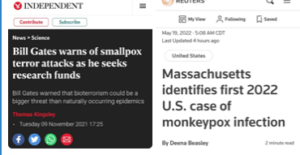 One thought on “Monkeypox Virus Now Confirmed In US, Sweden, UK, Portugal and Spain”