Update (1845ET): At least 10 cases of coronavirus have been discovered aboard the Carnival Japan cruise ship “the Diamond Princess”, which has been quarantined at Japan’s Yokohama port since yesterday after officials learned that a passenger who recently disembarked tested positive for the virus in Hong Kong.

JUST IN: More than 10 people aboard a Japanese cruise liner have tested positive for #coronavirus, Japan’s @tbs_news reported, after all 3,000+ passengers were quarantined earlier Tuesday 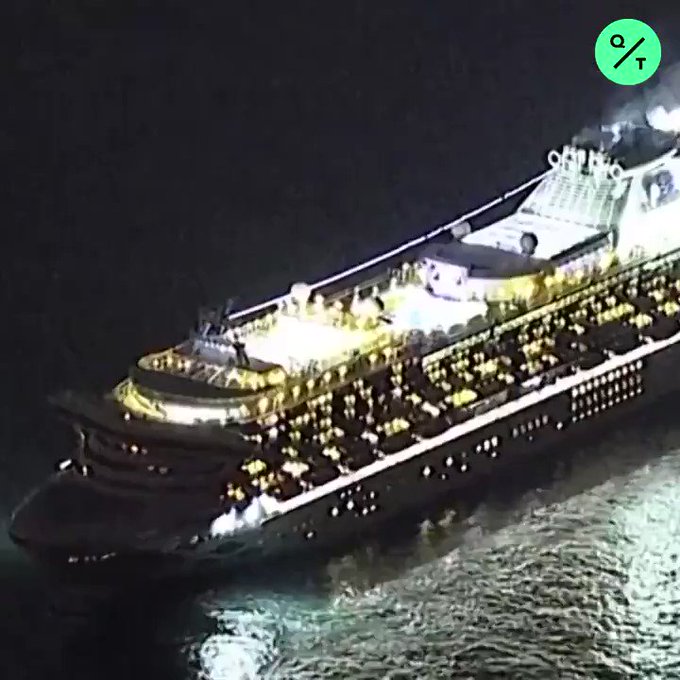 As we reported earlier, 3,000+ passengers aboard the cruise ship are under quarantine. It’s unclear when they’ll be allowed to leave the ship. All individuals who were found to be infected with the virus were taken to a local hospital for treatment.

Meanwhile, after unveiling the city’s first virus-related death, Hong Kong health officials warned Tuesday that the coronavirus outbreak could “spread widely through Hong Kong.” Three newly diagnosed cases raised the total number diagnosed in the city to 18, with at least four of those cases being confirmed human-to-human transmissions, according to SCMP.

“It is highly probable the four were infected locally, so there could be invisible chains of infection happening within communities,” Chuang said. “We are not ruling out a large spread [of the virus] in the future.”

In other news, South Korea just confirmed 2 more cases, raising the country’s total to 18 (the same as Hong Kong).

And for the second time in as many hours, health officials on the mainland updated the tally of confirmed cases.

Additionally, according to China’s NHC, 185,555 cases under medical observation, up from 171,329 yesterday. Meanwhile, 892 cases have been cured. After Tuesday’s rally in US stocks, will this number be all that bulls need to drive this massive short-squeeze even further?

Here’s the SCMP’s latest roundup of coronavirus cases (it has yet to be updated to reflect the new cases): 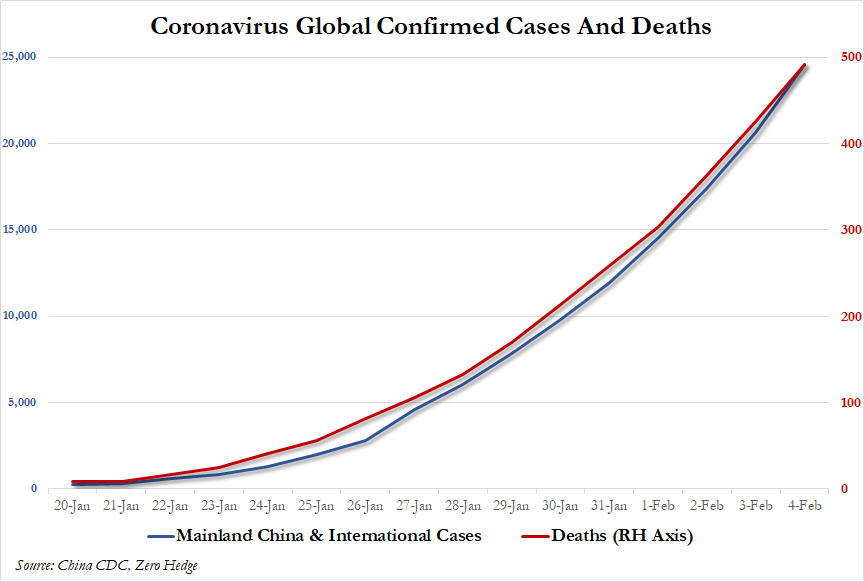 More than 5,000 health care workers walked off the job on Tuesday, worsening what’s becoming a serious public health crisis, as they pressure the city government to close all borders with the mainland. Health officials warned that newborns and the elderly are still at risk.

Back in Wuhan, the entire city remains on lockdown, with streets eerily empty aside from a handful of pedestrians. The New York Timesjust published a video of sweeping drone footage of the city, which is the epicenter of the virus and by far the hardest hit.

As for the cruise ship, it’s just the latest example of public officials underestimating the sheer infectious capacity of the coronavirus.

Update (1715ET): The latest data release from China’s Hubei Province shows yet another huge surge in cases and deaths.

The full China data will be available shortly.

Update (1145ET): In a stunning announcement by officials in Nanjing Province, authorities have unveiled what amounts to full martial law and furthermore, taking enforcement of reporting the sick extremely seriously:

“Nanjing issued a notice to further strengthen community management during epidemic prevention and control: fully implemented community closed management, all people entering and leaving the community must wear masks. Strict inspection and registration of vehicle personnel in the community.

Strengthen community environmental governance and management of rental housing. If an outbreak occurs in a rented house without a timely report, the leasing unit or individual of the house will be held accountable according to law.”

Nanjing is home to 8.35 million people – this has to be the largest enforcement of martial law in history.

Update (0900ET): After saying the viral outbreak would have ‘no impact’ on the US economy last week, White House economic advisor Larry Kudlow has now revised that view.

The coronavirus outbreak will likely have some impact on the supply chains of American companies, but the impact probably won’t be catastrophic, Kudlow told Maria Bartiromo during an interview with Fox Business Network.

“It’s not a catastrophe. It’s not a disaster,” Kudlow said, adding later: “We’ve been through this before and I just think the impact is minimal.”

However, Kudlow added that it might take longer for China to fulfill some of its promises from the ‘Phase One’ trade deal (specifically, their promise to buy an additional $200 billion in American-made goods).

Impact of #CoronavirusOutbreak from @larry_kudlow “prob it will be .2% in 1Q, another .2% later in the year. It’s not a disaster. Minimal impact”. @MorningsMaria @FoxBusiness “we are reducing inequality. Yes export boom will take longer but #USMCA will unlock gains”

95 people are talking about this

“We will not fine tune the economy bc of #CoronavirusOutbreak this Is a blue collar boom” – @larry_kudlow @WhiteHouse “if it aint broke, don’t fix it” kudlow calls for .2% bite in 1Q., another .2% impact later in the year @MorningsMaria @FoxBusiness

We’d be curious to know: What does Wilbur think about this?

No new coronavirus-related deaths were announced overnight, leaving the global fatality toll at 427, with all but two of those deaths occurring in China, according to the South China Morning Post. The total number of confirmed cases is closing in on 21,000, as nearly 200,000 are ‘under observation’ in China. 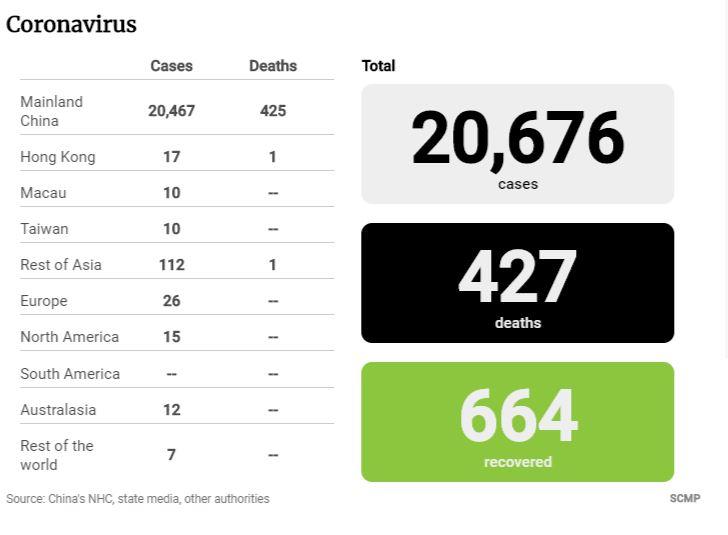 Yesterday, President Xi convened a second meeting of the Politburo Standing Committee, China’s highest governing body. The public meeting marked Xi’s second appearance before the Chinese people since the coronavirus outbreak. According to reports in Chinee state media, Xi declared the outbreak “a major test of China’s system and capacity for governance and we must sum up the experience and draw a lesson from it,” while declaring the outbreak a threat to societal stability. As we reported yesterday, Xi also warned local officials that they would be punished if they failed to suppress the virus, or if they slowed down the government’s efforts to fight the virus for the sake of “formalities” and “bureaucratism,” according to the New York Times. 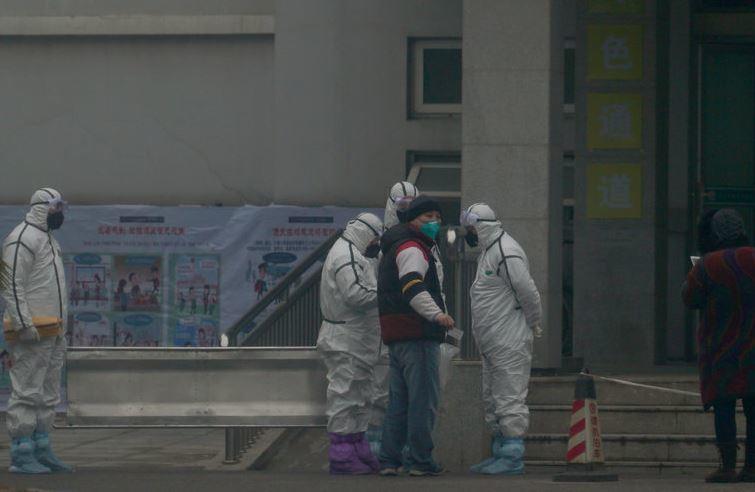 Already, more than 400 local officials have already officially punished for dereliction of duty, despite complaints from some (including the Mayor of Wuhan) that Beijing tied their hands.

China’s financial ‘support’ of the WHO continued to pay off on Tuesday as the head of WHO’s Global Infectious Hazard Preparedness division said that the nCoV outbreak doesn’t yet constitute a global “pandemic” – directly contradicting the organization’s declaration.

Replying to @AFP and 2 others

VIDEO: The head of WHO’s Global Infectious Hazard Preparedness division says that the outbreak of the deadly novel #coronavirus, which has spread from China to two dozen countries, does not yet constitute a “pandemic” 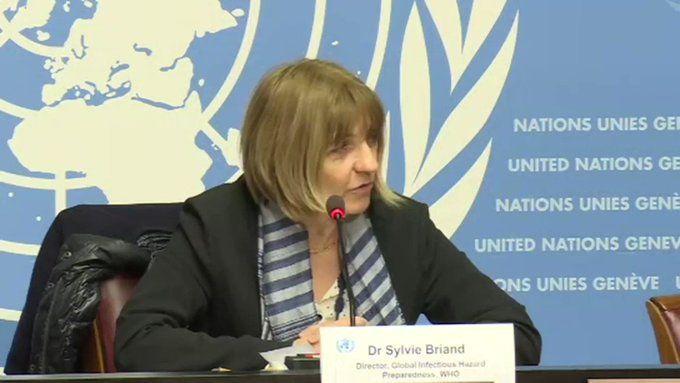 As the world grows increasingly skeptical of the numbers and information coming out of China, Beijing’s NHC said Tuesday that the coronavirus mortality rate would drop further as soon as “suitable treatments” are implemented in Wuhan. What kind of treatments are they talking about? Well, as we’ve repeatedly pointed out, nCoV responds to a cocktail of AIDS drugs (sometimes augmented with typical flu treatments). Some scientists have highlighted certain similarities between HIV and nCoV.

NHC Deputy Director Jiao Yahui said the national fatality rate was just 2.1%, with the vast majority of deaths in Hubei province. Some scientists have projected that the real death rate might be closer to 11%.

Especially after Hong Kong suffered its first confirmed fatality due to the coronavirus, marking only the second death from the outbreak outside China.  The dead man traveled by train to Wuhan on Jan. 21 before returning to Hong Kong two days later.

Macau, the only place in China where casino gambling is legal, shut down its casinos for at least the first half of February.

Though some other provinces are catching up, Hubei remains by far the hardest-hit of China’s 31 provinces. The central Chinese province has lost 414 people, or 97% of the mainland death toll and the mortality rate in Wuhan, the provincial capital, has reached 4.9%, with 313 deaths so far. The mortality rate for Hubei as a whole is 3.1%, the highest of any province in the country.

Outside China, 6 new cases were confirmed in Thailand overnight, along with 6 new cases in Singapore (4 human-to- human), a first case in Belgium and the revelation about 105 suspected cases in Philippines, up 25 since Monday. Anti-Chinese sentiment in the Philippines has crested since the outbreak reached its shores, with the president even threatening to deport Chinese travelers and residents en masse.

Since our last check-in, airlines have suspended more routes to China. At least two more Asian airlines – Hong Kong’s Cathay Pacific and Japan’s Jetstar – suspended routes to China on Tuesday, joining dozens of other airlines, including almost all of the major American carriers, in suspending passenger travel as demand plummets. Domestic airlines, meanwhile, have been asked by the Party not to cut international flights. American Airlines suspended flights to Hong Kong from Dallas and Los Angeles through Feb. 20.

#China asks domestic airlines not to cut international flights, aviation authority says on social media. Requests when Chinese airlines cancel a portion of flights due to lower market demand they ensure they continue to operate to countries where flights are allowed. #Wuhanvirus

Taiwan will ban foreigners who have visited or have been living on the mainland over the past 14 days from entering the island, effective Friday. The ban won’t apply to foreigners living in Hong Kong or Macau. On Tuesday, Taiwan’s coastguard stepped up patrols around the resort island of Penghun to stop Chinese fishing boats from “intruding” into Taiwanese territory (and possibly carrying Chinese desperate to avoid quarantine), the SCMP reports.

The decision to tighten restrictions on travelers from the mainland comes after its government condemned Beijing for blocking Taipei from joining the WHO’s anti-epidemic network, which would have allowed Taiwan to access first-hand information about the virus and any suppression efforts that are actually working.

Australia is the latest country to evacuate citizens from Wuhan. Like Japan, the US and the UK, it has forced those rescued into a two-week quarantine.

Japan has quarantined around 3,700 people aboard a cruise ship off the port city of Yokohama after a passenger who departed the cruise at an earlier date tested positive for coronavirus. So far, officials say they haven’t detected any cases of the virus aboard the ship, but tests are ongoing.

Replying to @AFP and 2 others

Japan has quarantined a cruise ship carrying 3,711 people and was testing those on board for the new #coronavirus on Tuesday after a former passenger was diagnosed with the illness in Hong Kong #DiamondPrincess 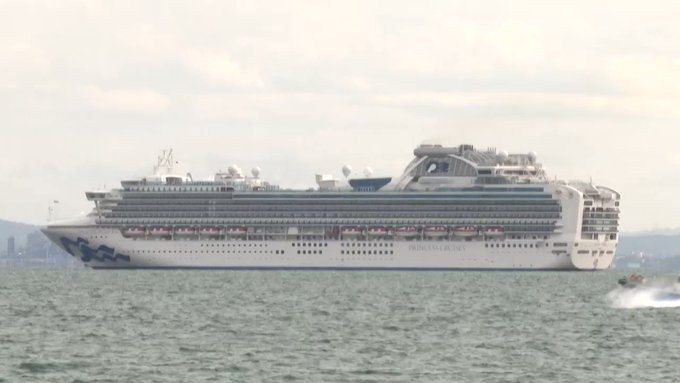 According to the Chinese press, a similar scenario is playing out at a mainland port (marking at least the third quarantine of a cruise ship since the beginning of the outbreak). 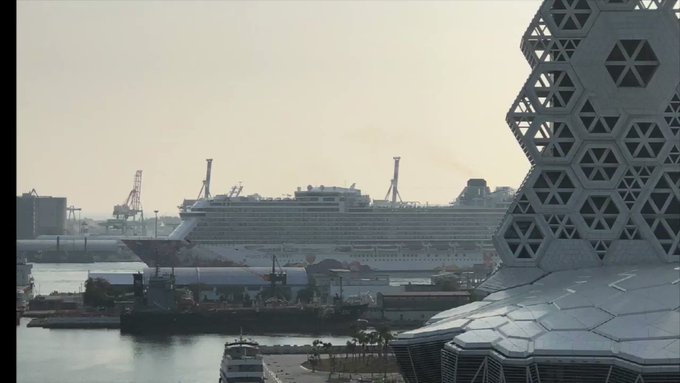 Chinese press has also reported on cases where individuals resisted a mandatory quarantine. This is a warning to the population as much as anything. 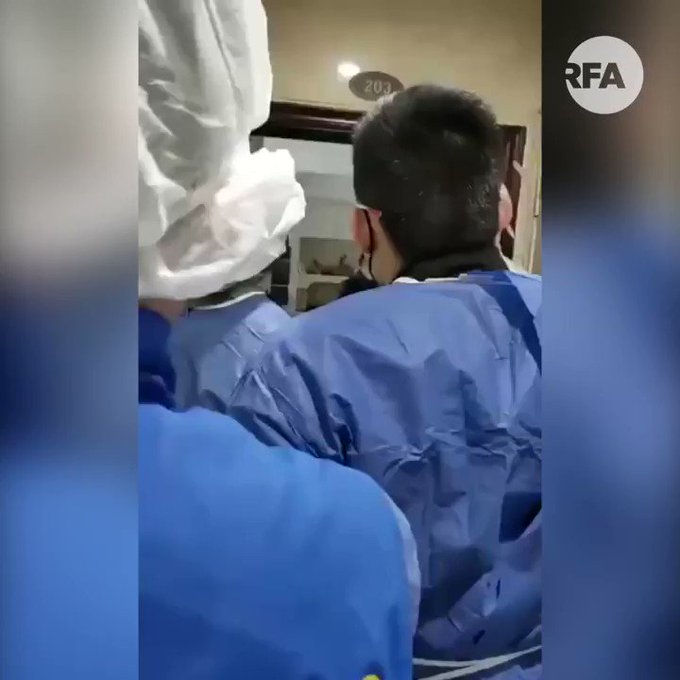 As we’ve repeatedly reported, signs are emerging that a combination therapy involving cocktails of drugs meant for different ailments may be effective in combating the coronavirus outbreak around the world, with different hospitals from Bangkok to Zhejiang reporting cases of patients recovering from the disease, according to SCMP.