The documents (pdf), obtained by Rebel News under an Access to Information Act request, show the Department of National Defence relaying that the U.S. military was concerned about China’s participation in the exercises, saying it could lead to “undesired knowledge transfer” from Canada to the PLA.

Canada’s military had sent observers to China during the PLA’s winter survival training in February 2018, and had invited PLA representatives to observe Canada’s training at the Petawawa military base in Ontario at a future date.

Canada’s arrest of Huawei executive Meng Wanzhou on Dec. 1, 2018, on an extradition request from the United States led to China taking a hostile stance against Canada in pursuit of her release. China followed its threat of dire consequences should Canada fail to release Meng by detaining Canadian citizens Michael Kovrig and Michael Spavor on Dec. 10, 2018.

A January 2019 email by a defence department official says the concern about the winter survival training may have come up on the sidelines of a Five Eyes intelligence alliance meeting in the fall of 2018, but added that it was only the United States that was raising security concerns about the engagements. It said the department had no record of other Five Eyes members raising concerns.

An email in the same month by an official with the foreign affairs department notes that there has been a shift in the U.S. stance toward China under the Trump administration, and adds that the reluctance of Canada’s defence department to engage with the PLA is aligned with Washington’s approach.

The documents, which span 2019, also show the foreign affairs department urging the defence department not to cancel its engagements with the PLA, saying that if Canada were to make significant reductions in military engagements, China “will likely read this as a retaliatory move related to the Meng Wanzhou case.”

“Canada does not want to be the partner that is reducing normal bilateral interactions,” reads a guidance document issued by the foreign affairs department to the defence department in February 2019.

In a controversial decision, Canada took part in China’s Military World Games in October 2019 in Wuhan. Referring to the event, China’s Embassy in Ottawa said in a statement after the games that “more countries commend China’s foreign policy and development path.”

A few months before the games, in June, Chinese jets had buzzed Canadian naval ships in the East China Sea.

The released documents show a number of other planned engagements between Canada’s military and the PLA. Included in the list are PLA members attending a security studies program in Canada; PLA members teaching peacekeeping courses in Canada; Canadian forces taking and instructing peacekeeping courses in China; and Canadian delegations attending fleet review and training centres in China, among other planned items.

Canada’s Liberal government pursued closer ties with China after winning the 2015 election, at one point pursuing free trade talks with the communist country, and even considering an extradition treaty with the Beijing regime.

Up until recently, Canadian officials publicly dismissed the claim that the detention of Kovirg and Spavor was in retaliation for Meng’s arrest. Ottawa’s tone however has seemingly become more direct on China of late, with Prime Minister Justin Trudeau calling out Beijing last month for its “coercive diplomacy.”

However, he seems to have recently backed away from the promised new framework for Canada-China relations, saying the policy is “evolving.” He also told a parliamentary committee that Canada should avoid tough talk on China.

The Conservative Party’s foreign affairs critic Michael Chong and defence critic James Bezan issued a statement criticizing the Liberal government for pushing for military engagement between Canada’s military and the PLA to please the Chinese regime.

“[Despite] the fact that China has kidnapped our citizens, punished our farmers, and threatened Canadians in Hong Kong, the Liberal government is willing to jeopardize our Five Eyes intelligence to avoid offending the communist regime in Beijing,” the statement said.

The statement also said the documents show a misalignment in the approach to China between the foreign affairs and defence departments. The MPs also criticized the Liberals for backing away from creating a new policy framework for dealing with China, and instead opting for an “evolving” policy.

“An evolving or shifting policy is antithetical to a framework, which is a clear, consistent policy that will defend Canada’s interests and values,” they wrote.

Global Affairs Canada couldn’t be immediately reached for comment for this article.

The Globe and Mail from behind a paywall

Put this story together with this 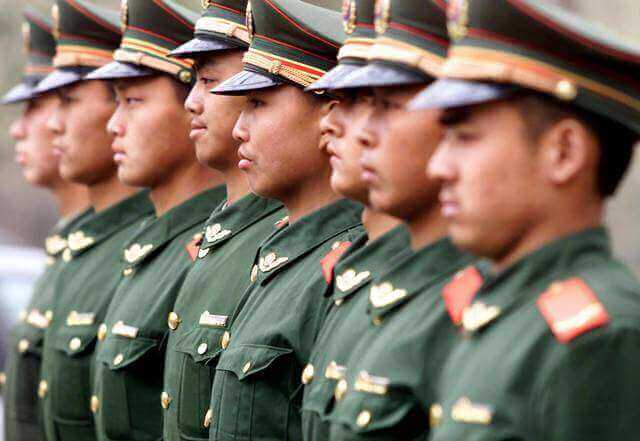 Kevin Annett rejoins the program to discuss recent legislation in Canada that allows Chinese troops on Canadian soil. The agreement allows China to protect their vast assets acquired over many decades. We discuss how the asset stripping from Canada and the United States into the hands of the Chinese is an indication of who is behind many of the events transpiring today. We also discuss the globalist agenda and how their plans also tie into the overall plans of the Chinese and ultimately how we will lose all of our basic rights if we do not push back. See more about Kevin and his work at www.murderbydecree.com or at www.republicofkanata.ca

Kevin Annett rejoins the program to discuss recent legislation in Canada that allows Chinese troops on Canadian soil. The agreement allows China to protect their vast assets acquired over many decades. We discuss how the asset stripping from Canada and the United States into the hands of the Chinese is an indication of who is behind many of the events transpiring today. We also discuss the globalist agenda and how their plans also tie into the overall plans of the Chinese and ultimately how we will lose all of our basic rights if we do not push back.

DNI John Ratcliffe made this warning in an op-ed in the Wall Street Journal where he argued that “the intelligence is clear” when it came to China.

“Beijing intends to dominate the U.S. and the rest of the planet economically, militarily and technologically. Many of China’s major public initiatives and prominent companies offer only a layer of camouflage to the activities of the Chinese Communist Party,” Ratcliffe writes in the piece.

He wanted that the country was engaged in economic espionage and was looking to “rob, replicate and replace” the intellectual property of American firms in the hopes of replacing them in the global marketplace.

In his op-ed, Ratcliffe warns that China is gearing up for an indefinite stretch of strife with the United States. As such, he believes that it’s time for the U.S. to start getting prepared in return.

“Beijing is preparing for an open-ended period of confrontation with the U.S. Washington should also be prepared,” he wrote. “Leaders must work across partisan divides to understand the threat, speak about it openly, and take action to address it.”

He called that challenge posed by Beijing a “once-in-a-generation challenge. ” He said that Americans have always risen up to face such challenges in the past, from fascism and the Iron Curtain.

“This generation will be judged by its response to China’s effort to reshape the world in its own image and replace America as the dominant superpower,” he adds. “The intelligence is clear. Our response must be as well.”

Ratcliffe’s op-ed is just one in a series of efforts from the Trump administration to raise awareness about China’s crusade to replace the U.S. as the world’s preeminent superpower.

During a recent virtual summit hosted by the Aspen Institute, John Demers, who runs the Department of Justice‘s National Security Division, stated that at least 1,000 researchers had left the country since the DOJ launched multiple criminal cases against several suspected Chinese operatives for espionage.

“Only the Chinese have the resources and ability and will,” said Demers of the foreign influence activity that U.S. intelligence has seen in recent years.

China fires back, but US agencies determined to fight Chinese threat

In response to these efforts, the Chinese government said that the Trump administration was engaged in “an escalation of political suppression,” and warned that such actions would damage America’s global image.

But U.S. authorities are not deterred. Reports surfaced last week that the Trump administration plans to add the state-owned China National Offshore Oil Corp. to its group of companies blacklisted for having ties to the Chinese People’s Liberation Army.

The move comes from the Department of Defense, which is also moving to designate a number of other companies, including Semiconductor Manufacturing International Corp. as being owned or controlled by China’s military.

In addition, the Trump administration also announced last week that it would block cotton imports from a company in China’s Xinjiang region. The latter is where the communist party has detained an estimated one million Uyghurs and other Muslim minorities since 2016.

The communist party continues to detain large numbers of these ethnic minorities in internment camps and prisons where they are subjected to physical abuse and ideological discipline, the latter of which sees them forced to denounce their religion and language.

With the move, U.S. Customs and Border Protection will no longer accept shipments of cotton and cotton products from the Xinjiang Production and Construction Corps due to indications that they were made with slave labor.

Follow CommunistChina.news for more on how China is attempting to undermine the U.S. and the rest of the world.