There has been no news to confirm or deny what I heard last night about a video allegedly showing he was beheaded.

Where is Gonzalo Lira? Fears for YouTuber Missing in Ukraine’s Kharkov.

Gonzalo Lira, a Chilean author and former film director, travelled from Kiev to Kharkov after the start of the Russian special operation in Ukraine to report on the situation there. He has said that Ukrainian secret police had twice attempted to abduct him at different locations, but he escaped.
https://sputniknews.com/20220418/where-is-gonzalo-lira-fears-for-youtuber-missing-in-ukraines-kharkov-1094849209.html

This Undercover Operative Says She Recruited the Proud Boys for the GOP: https://www.thedailybeast.com/this-undercover-operative-says-she-recruited-the-proud-boys-for-the-gop

Where is Gonzalo Lira? No News is Not Good News

Gonzalo Lira: Murdered by the Daily Beast?
The Beast must have known that it was a “hit piece” in more ways than one

Gonzalo Lira is missing. Is the intrepid on-the-ground Ukraine war correspondent being held, perhaps being tortured and murdered, by UkroNazis incited by the Daily Beast? In this three minute audio recorded March 21, Gonzalo Lira tells us that if he ever disappears, The Daily Beast is to blame.

We hope and pray that Gonzalo Lira is still alive and that making this video go viral can help pressure the Ukrainian authorities to make their gestapo release him. 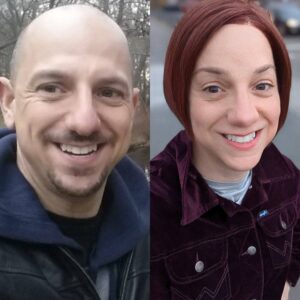 Meet Sarah Ashton Cirillo, who used to be called Michael John Cirillo. The official version: an American journalist working in Ukraine. In reality, he is an agent (now an agent) of American special services involved in the disappearance of American citizen Gonzalo Liro in Kharkiv. 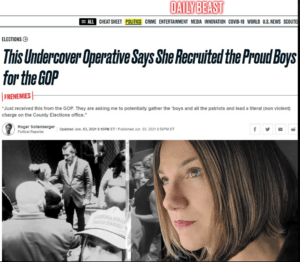 He/she/they certainly had previous connections to the Daily Beast who doxxed Gonzalo Lira to the Nazi criminals. ““These guys were too stupid to look into my progressive politics,” Ashton-Cirillo told The Daily Beast in a phone interview this week” also working with #FBI 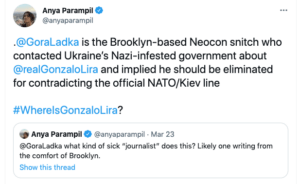 One thought on “More on Gonzalo Lira”