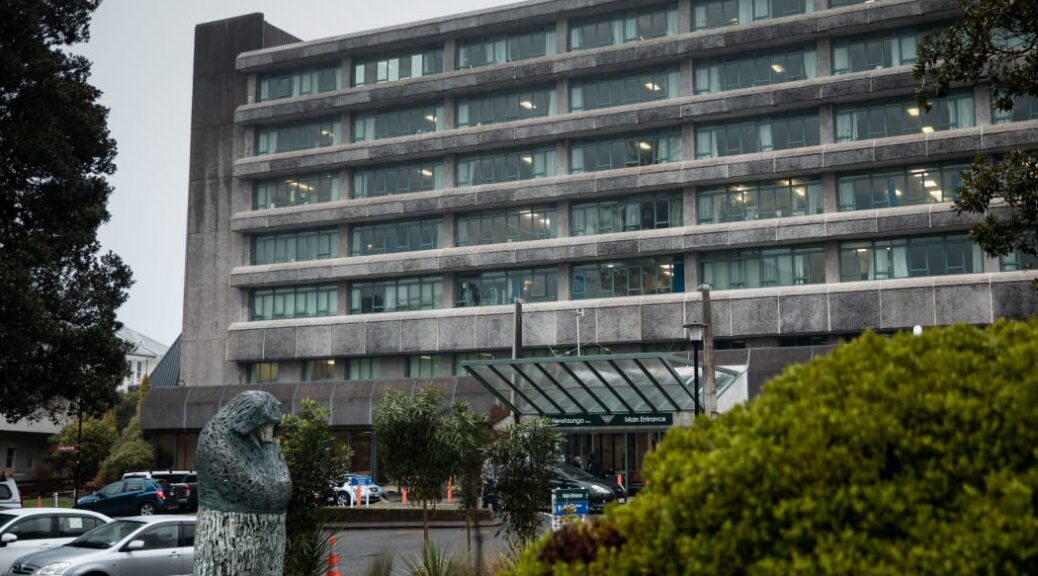 A “healthy” 50-year-old woman has died with brain bleed after allegedly being told by staff at Middlemore Hospital’s emergency department there would be an eight-hour wait before she was examined.

The woman presented to ED with a severe headache yesterday at 1am and was told there would be an eight hour wait, a doctor – who asked not to be named out of fear of putting his job at risk for speaking to the media – told the Herald.

“She was frustrated so left. She returned at 0400 (4am) that same day and was intubated. CT showed a massive subarachnoid haemorrhage, she died,” the doctor said.

Subarachnoid haemorrhage is a type of stroke and is most commonly caused by a brain aneurysm. A brain aneurysm is a ballooning of an artery in the brain that can rupture and bleed into the space between the brain and the skull.

Counties Manukau District Health Board has confirmed the death, saying they are now urgently investigating the circumstances of the patient leaving the hospital.

In a statement released by the DHB this afternoon, Watson said: “In the early hours of Wednesday morning a patient presented to our Emergency Department who then left only to return a few hours later following a life-threatening emergency,” Watson said.

At 2.30pm he told the Herald she was in ICU, at the same time the unnamed doctor said she had died.

The Herald sought clarification from the DHB and at 5pm were told: “It is with regret that we update this earlier statement and advise this patient has died in ICU. Our deepest sympathy to the family.”

Hospitals in red: 71 patients in ED waiting for beds …

Patient with typhoid fever slept in car due to lack …

Watson said: “The circumstances of the patient leaving the hospital are being urgently investigated. We acknowledge this is an extremely stressful time for the family and we have instigated an immediate investigation into the case and circumstances.”

The CEO said Middlemore continued to be under extreme pressure and patient presentations had been abnormally high for this time of year.

“We are focusing on managing the extreme demands on our services and continue to work with WDHB and ADHB to support patient demand. We have no further comment to make on this matter at this point in time,” Watson said.

Frustrated doctors said the woman’s death was a stark contrast to Minister Andrew Little’s comments last week that everyone who needed medical treatment would get it.

Little responded by saying: “Hospital management advise me the facts of the case are not fully known and an investigation is under way to establish them. We’re making long-term plans for training, recruitment, retention, and fair pay for the people who care for our families.”

The Minister said it would be improper for a minister to comment on an individual patient’s circumstances, particularly while an investigation was under way.

“The health system has been under serious pressure from years of neglect and underinvestment. It hasn’t been working for patients or the health workforce as best as anyone wants it to.

The doctor said if a patient presents with a severe headache the first thing they want to do is rule out “a bunch of conditions that can rapidly kill people, such as meningitis, heart attacks and a subarachnoid haemorrhage.”

“It’s one of the things that we get scared about missing,” they said.

The doctor said a patient with a severe headache should be seen within the hour after arriving to ED.

The Australasian College for Emergency Medicine (ACEM) said they anticipated reviewing the respective reports of the death from the hospital in question, and the Coroner.

“The College would like to extend its deepest condolences to any whanau and loved ones affected by this loss and offer its support to the healthcare workers and other staff at the hospital,” a statement from the college said.

The tragic death comes after the Herald reported last week that hospitals had hit “a level of panic” with 71 patients waiting for beds at Middlemore’s ED in one night.

Emails leaked to the Herald from a different doctor showed the South Auckland ED saw more than 420 patients for the second night in a row this week, normally they see 300, shifting the hospital to code red, which the doctor said basically meant “a level of panic”.

The doctor said pressure on hospitals was “extremely concerning”.

“I think red is like the level of panic basically […] every time you deviate from optimal timely care, you increase risk of complications occurring from delays, and that includes patient death,” he said.

“A patient that arrives in an emergency department with a 10 per cent access block, which means if you have 100 patients and 10 have been there for longer than eight hours, then they have a 10 per cent greater chance of dying over the next seven days,” Bonning said last week.

“There is a very real impact for people waiting.”

The unnamed doctor said last week that the minister needed to acknowledge the country was in a hospital crisis and staff needed to be paid better so they aren’t forced to leave the profession they love.

Little told the Herald last week that while hospitals were under pressure, “as they were every winter”, they were coping.

“A few months ago hospitals were preparing for a flu season that was expected to be bigger than the last two years and for that reason they expected to get planned care right down, most hospitals have been able to do that,” he said.

The Minister said he had not seen any data showing hospitals were reaching record levels of delays and patient presentations.

“It would be interesting if he (Bonning) did provide it, because he is known to say things like that without backing it up with data.”

ACEM hit back, saying they stood by immediate past president, Bonning, and his assertion that emergency departments in New Zealand are under extreme and unprecedented pressure.

“The College maintains that data supports Dr Bonning’s comments and will be reaching out privately to Mr Little to provide relevant supporting information, and to discuss the pressures on EDs,” they said in a statement.

Aotearoa New Zealand faculty chair Dr Kate Allan said: “Emergency doctors know an emergency when we see one and right now, what is being experienced in emergency departments across Aotearoa isn’t safe, it isn’t fair, and it isn’t sustainable, but we can fix it – together.

“We must ensure that clinicians and people who require emergency care are involved in decision-making as we navigate a very challenging winter.”

Today, Allan said: “Extended delays in acute care can lead to poorer clinical outcomes which can, at times, include death.”

The Nurses Union says it has been warning severe staff shortages have affected patient safety at hospitals long before a woman died after leaving Middlemore’s Emergency Department because of long wait times.

The woman left the hospital in the early hours of Wednesday morning, after being told it would be hours before she could be seen by a doctor.

She soon returned and later died in intensive care.

Daniels says it has become impossible to keep everyone safe in hospitals.

Nurses are warning more people will die if the health sector’s staffing crisis is not urgently fixed.

A patient died in Middlemore Hospital’s Intensive Care after previously leaving the hospital due to high waiting times.

Middlemore Hospital is urgently investigating the death of a patient who left the emergency department because of long wait times. Meanwhile, staff at Palmerston North Hospital say their ED is unsafe.

Counties Manukau District Health Board said the woman who died in Intensive Care at Middlemore Hospital had shown up at the ED early on Wednesday.

“The circumstances of the patient leaving the hospital are being urgently investigated. We acknowledge this is an extremely stressful time for the family and we have instigated an immediate investigation into the case and circumstances,” it said.

The DHB said the hospital was under extreme pressure with high numbers of patients.

Meanwhile, staff health and safety representatives at Palmerston North Hospital’s ED had given managers a week to fix overcrowding and excessive workloads there.

The Nurses Organisation said staff had been warning for months that lives were at risk.

One of the representatives, Kirsten Caves, said conditions in the ED had “broken” some nurses.

“There is huge stress and burnout and large numbers of nurses and healthcare workers resigning as a result of that. It’s not just in Palmerston North ED but across the country in healthcare we’re looking at a healthcare system that is understaffed and overworked,” she said.

The Australasian College for Emergency Medicine said emergency departments and health systems across Aotearoa were under extreme and unprecedented pressures.

It said the government’s Budget last month failed to tackle areas that contributed to overcrowding and crippling wait times in emergency departments.

“Extended delays in acute care can lead to poorer clinical outcomes which can, at times, include death,” the college said.

Midwives and expecting parents are stressed out by a lack of information about the future of maternity services in the Hutt Valley.

They say local DHB needs to tell them what will happen after the hospital’s quake-prone maternity ward closes.

They’re fed up and planning a protest march on Saturday to persuade the board to prioritise maternity services.

The PINs were issued late on Wednesday afternoon 15 June, and are based around three core issues: an overcrowded noisy work environment; lack of staffing resources resulting in untenable workloads; and staff wellbeing and stress, resulting in increased sick leave, burnout and resignations.

A PIN legally requires an employer or service provider to address a health and safety issue before a certain time in this case within eight days) and is a powerful step employees can take through their health and safety representative (HSR).

Safety concerns have been raised repeatedly with MidCentral District Health Board (DHB) over the last few months, but the HSRs say concerns have not been adequately addressed. Staff were surveyed about their support for the PINs, with 100 percent of those completing the poll (n=62) voting yes.

Staff say they are experiencing critical and unprecedented staffing shortages at the emergency department making it unsafe for both patients and staff.

HSR Kirsten Caves says it is extremely unsafe for both patients and staff if staff continue working under these circumstances.

“We’re stretched physically, mentally, and emotionally with a high level of sick leave leading to high resignations. This now means we are significantly understaffed.

“To make matters worse, we are lacking in resources and our department space just isn’t sufficient for the number of patients coming into ED.”

She said staff were absolutely exhausted, and that the health system needs desperately to be recruiting more nurses.

“These PINs highlight exactly why so many experienced nurses are decamping overseas to safer environments, and we just don’t have the nurses to replace them.”

MidCentral DHB management have until 23 June to comply with the PINs’ recommendations.