A devastating internal government memo has leaked out of Ukraine’s National Security and Defense Council saying more than 40% of Ukraine territory is now captured, and more than 75% of Ukraine’s military potential is destroyed.

The original, Ukraine/Russian language document is pictured below in its’ original language format with a translated version appearing beneath it: 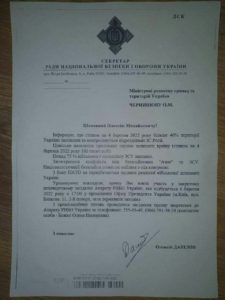 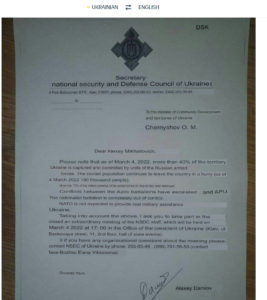 Document: Here are the borders of the new Ukrainian state – 40% of the territory has already been placed under Russian control

This revelation comes on the same day that a source in Ukrainian President Zelensky’s office released explosive inside information saying “On February 23 at 21:00 Zelensky was given an ultimatum from the Kremlin, in which the President of Ukraine was given 5 hours to decide on the recognition of Crimea and the LDNR within its borders. We [Ukraine] reported this to the State Department and the British Embassy, to which we received a response to ignore the ultimatum.”

About two hours after the ultimatum expired, Russia invaded Ukraine.

So ALL the death, destruction, and pain being caused by the ongoing hostilities is directly laid at the feet of the US State Department in Washington, DC, and the British Embassy in Kiev, who told Ukraine to “ignore” the ultimatum

The General Staff of the Army of Ukraine informed the Zelensky government that 40% of the Ukrainian territory is under Russian control while 75% of the military installations of the country have been destroyed.

This also explains why Russian President Vladimir Putin, despite the losses suffered by the Russian Army, recently stated that Ukraine may lose its statehood.

This is a tragic truth and concerns underground processes that have been going on for days.

“The borders of the new state”

Putin said in this regard:

“The current leadership must understand that if it continues to do what it does, it risks the future of Ukraine’s statehood.

“If that happens then they will be held accountable.”

Putin refers to Plan B of the Russian General Staff and concerns the complete dissolution of the Ukrainian state.

We are no longer talking about the transformation of the Ukrainian state into a Federation or Confederation, but about the division of Ukraine and the direct unification of 3/4 of the state with Russia.

This also explains why the huge Russian military phalanx has not yet entered Kyiv. He may not need to enter at all. As long as it encircles Kyiv and puts it under a prolonged siege.

Russia will move the borders of the new state west of the Dnieper. Until now, there have been doubts about whether the two regions of central Ukraine, Vinnitsa and Khmelnitsky, should be given to the new small autonomous state with Lviv as its capital.

However, the Russian General Staff stressed that the Vinnitsa region should be given to Russia in order to ensure the alignment of the Russian front in order to avoid a rapid enemy strike on the regions of Odessa or Kiev (see map).

That is, according to the map that follows, Russia takes Zhytomyr and Vinnytsia and seals the borders there. This also explains why the Russian Air Force is constantly bombing Ukrainian Army positions in Zhytomyr.

So he does not even have to enter Kyiv but will let it fall on its own as the trapped Kiev soldiers will be trapped everywhere and facing a huge humanitarian catastrophe.

“The rate of Russian airstrikes and Russian artillery fire in Ukraine has slowed over the past 24 hours compared to the previous days, but Russian forces are believed to be advancing in the south of the country,” the British intelligence service said in a statement.

“Ukraine continues to maintain control of the main cities of Kharkiv, Chernihiv and Mariupol ,” the Pentagon said in a statement on Twitter earlier today.

“There have been reports of street fighting in the city of Sumy. “It is very possible that all four cities are surrounded by Russian forces.”

The ministry added that Russian forces were likely to be advancing on the southern port city of Mykolaiv and that there was a realistic possibility that some forces would attempt to bypass the city to give priority to advancing on Odessa.

Document: 40% of Ukrainian territory is under Russian control!

According to a document of the Ukrainian General Staff of the Army, more than 40% of Ukrainian territory has been occupied by the Russians and 75% of military installations have been destroyed.

“By March 4, the Russians have occupied and controlled 40% of the country.

The civilian population continues to leave the country. By the 4th of the month, more than 180,000 citizens have left.

There are clashes between Azov forces and the Ukrainian Army (internal clashes).

The Nationalist Order is out of control.

NATO is not expected to provide real military assistance to Ukraine.

Russian sources comment that “this is the strongest evidence that the communications networks of the Ukrainian military structures are completely blocked and that the Ukrainian army has no contact between its cities.

“Communication is allowed only in the capital of western Ukraine, but in the east he has to prepare a document and send it or take a photo of it and send it via mobile, which makes him vulnerable to hacking.”