Could Ukraine become the New Israel? As wild as the idea sounds, we’re going to show you news articles that discuss that possibility. The world has entered the twilight zone and nothing can be ruled out as impossible. The TruNews team will show you what we found today.

Later in today’s TruNews, we will share with you what the Bible says about how to survive a worldwide food shortage.

Soldiers in ‘cinemas, supermarkets, and people with weapons’ is Ukraine’s future, Zelenskyy tells reporters, as the country’s leaders begin to imagine what a precariously post-war Ukraine might look like 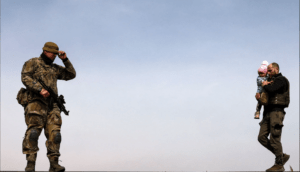 Ukraine will become a “‘big Israel’ with its own face,” Ukrainian President Volodymyr Zelenskyy declared on Tuesday, indicating that his country intends to emulate the Israeli security state in the wake of Russia’s invasion.

“Ukraine will definitely not be what we wanted it to be from the beginning. It is impossible. Absolutely liberal, European – it will not be like that. It [Ukraine] will definitely come from the strength of every house, every building, every person,” Zelenskyy told Ukrainian media during a briefing