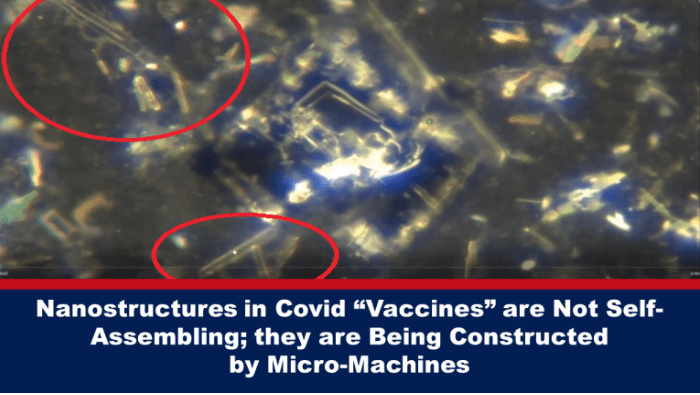 During an interview with Australian podcaster Maria Zeee, Dr. David Nixon revealed a video of nanotechnology in Pfizer’s Covid injections assembling.  They are not self-assembling, Dr. Nixon explained, but rather they are being assembled by nanorobots or micro-machines.  The work of these robots is happening at such a slow pace that the work they’re doing isn’t detected unless the video is played at about 100x real-time speed.  To demonstrate Dr. Nixon condensed his 3-hour video into about a minute.

Dr. David Nixon is a general practitioner based in Brisbane, Australia, with a special interest in diabetes, cardiovascular disease and the management of long-term conditions.

In a previous podcast with Maria Zeee, Dr. Nixon revealed his findings of nanotechnology inside the Covid injections. He also discussed how protecting the vials inside a Faraday bag stopped the structures from forming.  A Faraday bag is used to block out electromagnetic radiation; e.g., signals sent between cell phones.  You can read more HERE and watch this earlier podcast HERE.

In his latest revelations, Dr. Nixon played a video he had taken of the contents of a vial of Pfizer’s Covid “vaccine.” He placed approximately four drops of Pfizer “vaccine” on a glass slide, placed it under a microscope at 200x magnification and filmed the slide for three hours.

In real-time, it appears nothing is happening. “But look what happens when I speed this up,” Dr. Nixon said, “it’s apparent we’re dealing with something completely different from self-assembly – this is nano construction … it’s not assembling itself, it’s essentially, I guess, micro construction.

Dr. Nixon points to two micro-machines in the video that are working on building the same nanostructure “square” and commented that “it’s being put together by, essentially, micromachinery which is coordinated.  You can’t see anything in real-time, nothing seems to be happening. It’s only when you speed it up [you can see it]. I can’t even begin to think of technology that works at those sorts of speeds … Not only is this happening very slowly but it’s also happening in a coordinated fashion.”

It takes a little while to get your eye in but once know what to look for the micro-machines can clearly be seen at work in Dr Nixon’s video.  To help our readers get their eye in we have taken a screenshot at about timestamp 10 mins and circled in red the two robotic arms or micro-machines pointed out by Dr. Nixon that are assembling the nanostructures.  Once you get your eye in you can see what seems to be a third micro-machine at work on the right-hand side of the nanostructure “square.”