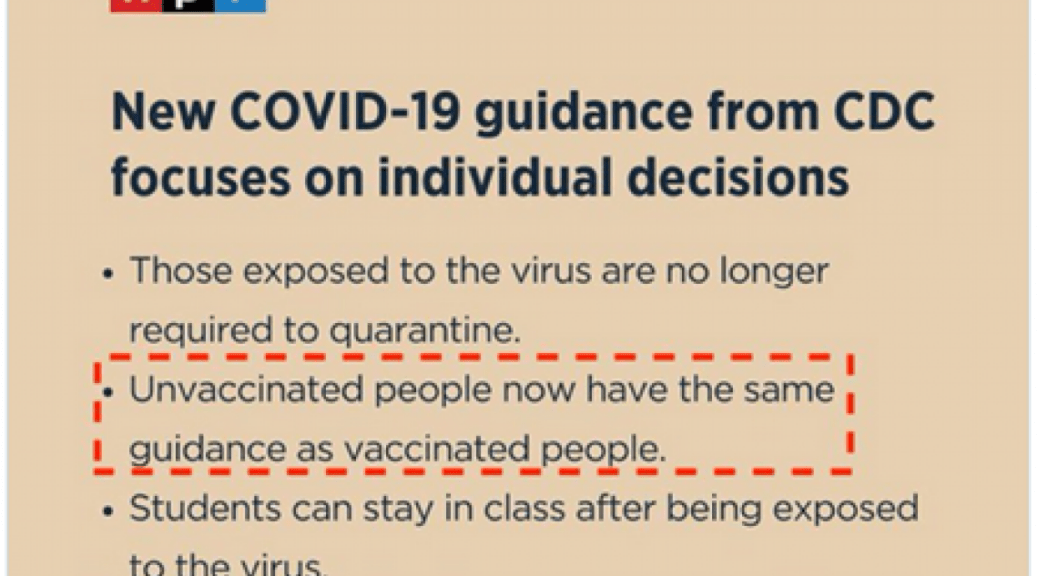 Authored by Zachary Stieber via The Epoch Times (emphasis ours),

The U.S. Centers for Disease Control and Prevention (CDC) is admitting it gave false information about COVID-19 vaccine surveillance, including inaccurately saying it conducted a certain type of analysis over one year before it actually did.

The false information was conveyed in responses to Freedom of Information Act (FOIA) requests for the results of surveillance, and after the CDC claimed COVID-19 vaccines are being monitored “by the most intense safety monitoring efforts in U.S. history.”

“CDC has revisited several FOIA requests and as a result of its review CDC is issuing corrections for the following information,” a CDC spokeswoman told The Epoch Times in an email.

No CDC employees intentionally provided false information and none of the false responses were given to avoid FOIA reporting requirements, the spokeswoman said.

The Epoch Times in July submitted a FOIA, or a request for non-public information, to the CDC for all reports from a team that was formed to study post-vaccination heart inflammation by analyzing reports submitted to the Vaccine Adverse Event Reporting System (VAERS), a system run by the CDC and the U.S. Food and Drug Administration.

The CDC not only said that the team did not conduct any abstractions or reports through October 2021, but that “an association between myocarditis and mRNA COVID-19 vaccination was not known at that time.”

That statement was false.

Clinical trials of the Pfizer and Moderna COVID-19 vaccines detected neither myocarditis nor pericarditis, two types of heart inflammation. But by April 2021, the U.S. military was raising the alarm about post-vaccination heart inflammation, and by June 2021, the CDC was publicly acknowledging a link.

The CDC previously corrected the false statement but did not say whether its teams had ever analyzed VAERS reports.

“In reference to myocarditis abstraction from VAERS reports—this process began in May 2021 and continues to this date,” the CDC spokeswoman said in an email.

The CDC has still not released the results of analyses.

The CDC promised in January 2021 that it would perform a specific type of data mining analysis on VAERS reports called Proportional Reporting Ratio (PRR). But when Children’s Health Defense, a nonprofit, asked for the results, the CDC said that “no PRRs were conducted by the CDC” and that data mining “is outside of th[e] agency’s purview.”

Asked for clarification, Dr. John Su, who heads the CDC’s VAERS team, told The Epoch Times in an email that the CDC started performing PRRs in February 2021, “and continues to do so to date.”

The CDC is now saying that both the original response and Su’s statement were false.

The agency didn’t start performing PRRs until March 25, 2022, the CDC spokeswoman said. The agency stopped performing them on July 31, 2022.

The spokeswoman said it “misinterpreted” both Children’s Health Defense and The Epoch Times.

Children’s Health Defense had asked for the PRRs the CDC had performed from Feb. 1, 2021, through Sept. 30, 2021. The Epoch Times asked if the response to the request was correct.

The spokeswoman said the CDC thought “data mining” referred only to Empirical Bayesian (EB) data mining, a different type of analysis that the Food and Drug Administration has promised to perform on VAERS data.

“The notion that the CDC did not realize we were asking about PRRs but only data mining in general is simply not credible, since our FOIA request specifically mentioned PRRs and their response also mentioned that they did not do PRRs. They did not say ‘data mining in general,’” Josh Guetzkow, a senior lecturer at The Hebrew University of Jerusalem who has been working with Children’s Health Defense, told The Epoch Times via email.

“There is also no credible reason why they waited until March 31, 2022, to calculate PRRs, unless it was in response to our initial FOIA filed in December 2021, which was rejected on March 31, 2022—the same day they say they began their calculations. It means the CDC was not analyzing VAERS for early warning safety signals for well over a year after the vaccination campaign began—which still counts as a significant failure,” he added.

Dr. Wolf: The CDC Finally Admitted The Vaccinated And Unvaccinated Have Same Protections

And just like that . . . It’s Over! CDC Fully Caves to reality 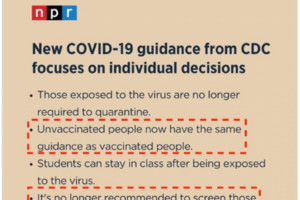 This is HUGE news folks. In Bureaucrat speak, this is a near-complete cave-in to the actual facts.  The CDC has issued “new guidance” on COVID.  Those of us who did NOT believe them and who did NOT take their phony Vaccine, are proven 100% right!

The US Centers for Disease Control (CDC) has issued what they call “new guidance” for COVID, and guess what?  It now gets treated just like . . .  the Flu.

In short, the new guidance says the following:

If you managed to maintain your integrity through this awful period of time, congratulations! You are one of the rock stars of this story. You are a solid individual who has courage and stood firm and tall when it mattered most.

As for the people who didn’t, some can be forgiven. But many cannot.

Now, we need to ask, what should be done with those who knew better, or should have known better?

Those who could have and “should” have known better, like the doctors who failed to utilize known and proven early treatments to save lives?

The public health authorities that locked people down and forced masks onto children’s faces without a shred of supporting science to back those decisions?

Medical hospital administrators who took the monetary bait and forced patients onto toxic and deadly regimens of Remdesivir and ventilators (again, without any supporting evidence!).

The NIH treatment panel that still – to this day – does not recommend vitamin D, or any of the other actual safe and effective early treatments?

Sorry, not sorry, those people need to suffer real and lasting public consequences. Some doctors should lose their licenses. Some bureaucrats need to lose their jobs while others need to go to trial.

I feel most acutely for those who got caught up and suffered terribly as a result. I feel truly awful for all the people prevented from being at a loved one’s passing, or who, as a condition of continued employment, were coerced into getting Covid jabs they neither wanted nor needed.

There are far too many tragic cases out there. Far too many young lives were lost and continue to be lost.

I am angry that it happened and at the petty, ignorant, bureaucrats who forced it to happen.

“Sudden Adult Death Syndrome” is a thing now, and the attempts to normalize it by the press have left me thinking that those companies and journalists who engaged in this ought to be barred for life from ever being in the business again.