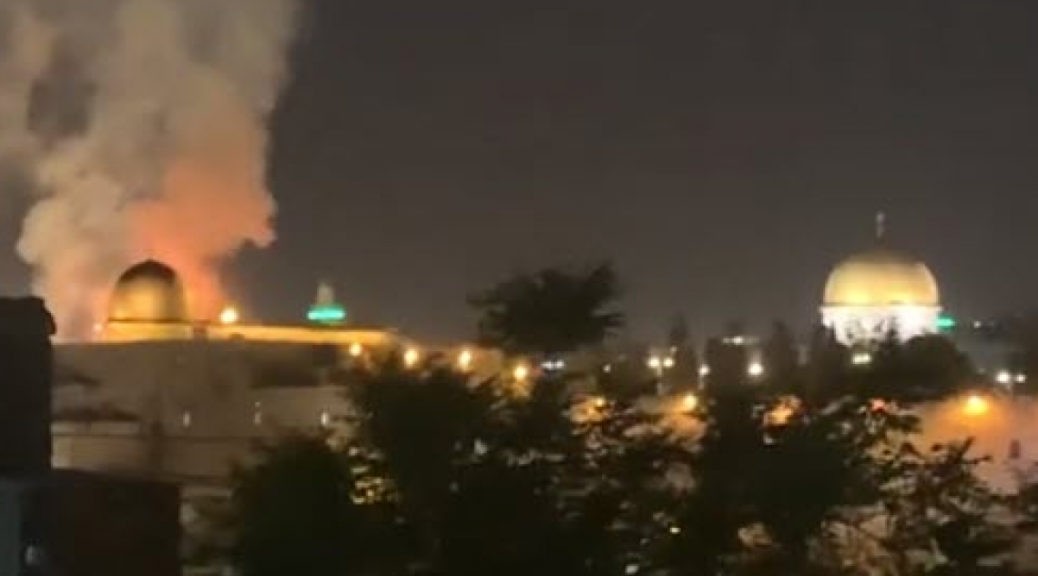 A recent news report by the Lebanese news outlet Elnashra claims that Hezbollah has gone to full-level war alertness amid rising regional tensions between Israel and the Iran-led Axis of Resistance.

Elnashra sources: Hezbollah summoned a portion of its members to the South and raised its readiness to 100%, something that has not happened since July War 2006

– Elnashra sources: Hezbollah warned against the Israeli (military) exercise, as the Israeli army is currently repeating the same steps that preceded the July 2006 war

– Elnashra sources: The Israeli (military) exercise hands the decision of war and peace to Kochavi, and this is what raises concerns for Hezbollah

Confidential sources revealed to Elnashra that “the Israeli (military) exercise that Hezbollah Secretary General Sayyed Hasan Nasrallah talked about in his lastest speech is extremely dangerous”, explaining that “this exercise simulates a major war imposed on Israel on the southern and northern borders of Palestine, as well as the Sinai front and the (Israeli) interior. (This exercise also simulates a scenario) in which Israel is exposed to a huge amount of missiles being fired by the resistance forces of Lebanon, Syria, Yemen, Iraq, Palestine and the Gaza Strip, and especially (simulates a scenario in which) protest movements (also) potentially erupt in the West Bank and the interior”.

The sources pointed out that “conducting the exercise in this way aims to ‘interlock arms’”, which means that the (Israeli) field commander who is present on the ground and is in charge of defending the Galilee (region) for example, ought to be able to deal with (various) land-based weapons i.e. armor, artillery, air and naval command and intelligence, and has to be able to regulate the course of the (various elements of the) operation”.

Explaining that “about two and a half months ago, Israel conducted a small exercise that lasted for seven days, yet this one is the first (of its kind) ever since the establishment of the (Israeli) entity, and it must be noted that this exercise is dangerous in that it gives the power (to declare) peace and war to the Israeli Chief of Staff, General Aviv Kochavi. Furthermore, the enemy has started and continues the mobilization of its elite brigades – six brigades (in total) – about a week ago”, stressing that “Hezbollah warned against this exercise because in past wars, Israel worked on transporting soldiers and military personnel from the training fields directly to the battlefield, and this is what is happening now at the southern front of Lebanon and the northern part of Palestine”.

The sources also pointed out that “Hezbollah has raised combat readiness in the South (of Lebanon), and in the various areas, formations and military classifications of Quneitra. (Hezbollah) has also kept on constant duty a portion of its members, called up a number of its forces, and raised its combat readiness from tonight to 100%, something that has not happened since the July 2006 war”.

Address of Hezbollah Secretary General, Sayed Hassan Nasrallah, on May 5, 2021, as part of the joint speech of the leaders of the Axis of Resistance, in anticipation of the International Day of Al-Quds (Jerusalem) celebrated on May 7 2021.

This International Day was inaugurated by Imam Khomeini in 1979, the year of the triumph of the Islamic Revolution in Iran, to revive the Palestinian cause, and is celebrated on the last Friday of the month of Ramadan.

The military leaders of Hamas and the Palestinian Islamic Jihad, AnsarAllah in Yemen and the Hashd al-Cha’bi in Iraq, as well as religious dignitaries such as the Imam of the Al-Aqsa Mosque, the Patriarch of the Jerusalem Orthodox Church and Sheikh Issa Qassem of Bahrain, along with other personalities, spoke during this virtual conference. Nasrallah’s intervention lasted only a quarter of an hour, while his speech on Al-Quds Day lasted almost an hour.

[..] There are negative developments, like the wave of normalization (of relations with Israel). When some Arab countries move towards normalization, it means that the rest of Arabs and Muslims, the rest of the countries and the living forces in the Islamic Community (Umma), must raise their voices even higher. This leads to greater responsibility: this negative point leads to more responsibility, more presence, and more expression of our position (condemning and) fighting the normalization process.

But despite everything, we are convinced that this normalization will not succeed in protecting this usurping entity (Israel), not at all! Certainly, it can somewhat lift the spirit of (the Israelis), give them more oxygen, possibilities, (a breath of fresh) air, but anyway, the countries who recently normalized have never been part of this battle (against Israel), thus their presence or exit (from our ranks) cannot have the least influence on the progress and outcome of this battle. Naturally, this set of factors, in addition to recent upheavals in the Middle East and around the world, the detente which is actually taking place in the region between certain countries, certain white flags which are starting to be raised here and there (by Saudi Arabia and Gulf countries), recognizing, in one way or another, their defeat and failure, or the dead end to which their horizon is confined, all of this makes us feel that we are closer than ever (to the liberation) of Al-Quds.

My last message will be for the Israelis themselves. I tell them this: you know well, in your heart of hearts, whether it is based on your religious texts or doctrines, on your books or your prophecies, and also based on what some of your leaders and experts say, and also some of your religious authorities, you know (very well) that this entity (Israel) has no future, that it is on the verge of extinction and that it has little time left to live, very little time. Therefore, in this battle you are wasting your energy, and your young people are wasting their youth and their blood, in vain and to no avail.

Either way, the sound logic that must be imposed on all occupiers and invaders is as follows: give back the land you have occupied to its true owners, and go back to where you came from. Otherwise you will be expelled in one way or another, by force or otherwise. This land belongs to the Palestinian people and the peoples of this region, in the diversity of their religious and doctrinal affiliations, but this land is by no means for Israel or for the colonizers, occupiers and settlers from all over the world.

We believe in this near future (where Israel won’t exist anymore), we believe in it very firmly, and this faith is not based only on religious and ideological bases, but is based (above all) on the data, on the events which occur, especially on those of the last decades, the last years and on what will happen (soon) in this region.

I would also like, in conclusion of this brief statement, to salute the grandiose soul of the great martyred leader, Hajj Qassem Soleimani, whose name, picture, soul, footprints, strategic thinking, presence on the ground and breathing remain strongly present, in all the battlefields and places of this Axis (of Resistance). It is impossible for us to forget him, nor to forget his grandiose martyrdom, nor do we forget his enormous benefits and his grandiose presence alongside all the forces of the Resistance in our region.

The (massive) presence of the Palestinian people today (demonstrating) in the squares is awe-inspiring, a divine proof on any Arab, on any Muslim and on every free man in this world on whom weighs the responsibility to stand with strength and with all his capacities at the side of this people.

For Al-Quds Day, despite the Covid-19, any form of demonstration of support that does not contradict the health instructions, we call for it so that this expression of solidarity may be frank and strong, with the Grace of God.

May the peace of God be upon you, along with His mercy and blessings.

Donate as little as you can to support this work and subscribe to the Newsletter to get around censorship. You can also follow us on Twitter.

“Any amount counts, because a little money here and there, it’s like drops of water that can become rivers, seas or oceans…”