This is the most alarming news that seems to vindicate the most pessimistic observers like Hal Turner.

At the same time NATO is trying to string Russia along and blame it for cutting off negotiations when it is practising what used to be called Brinkmanship.

Even at the darkest days of the Cold War and the Cuban Missile crisis the two sides negotiated and even backed down to avoid nuclear conflagration.

I do not have the energy to spend lots of time on this so I urge you to join my Telegram channel if you have not already. Sputnik,
15 January, 2021
During the NATO-Russia summit earlier this week the alliance strongly rejected the key proposals by Moscow on European security – to limit NATO’s eastward expansion and the deployment of its armaments close to Russia’s borders. The Kremlin sees both trends within the alliance as a national security threat.
NATO Secretary General Jens Stoltenberg has stated that the alliance has already made the decision that Ukraine and Georgia will become members of the bloc. In an interview for the Italian news outlet La Repubblica, Stoltenberg said that the decision had been made in 2008 during a summit of NATO states.
The NATO chief noted, however, that nothing was said about when either of the states will be accepted into the alliance’s ranks. Neither Ukraine, nor Georgia has been accepted into the bloc so far and no timeline has been given for it to happen.
At the same time, Stoltenberg reiterated earlier statements by NATO that it will not sacrifice its open-door policy in the security dialogue with Russia, which kicked off earlier this week. Moscow demanded that the alliance stop its eastward expansion and prevent the deployment of offensive weapons any closer to Russia’s borders. The Kremlin views NATO’s encroachment towards the country’s borders as a national security threat.

Both Georgia and Ukraine have expressed a desire to join the alliance. Kiev even embedded the policy to join NATO in the Ukrainian Constitution. Despite the refusal to accept Ukraine into NATO, the West has pledged to respond should Russia attack the country.
For several months, NATO members have been floating the idea that Moscow might be plotting an invasion, even the though Kremlin has repeatedly assured them it harbours no such plans. The European security talks between Russia, the US, and NATO earlier this week were organised in part to address the West’s concerns.
From Hal Turner 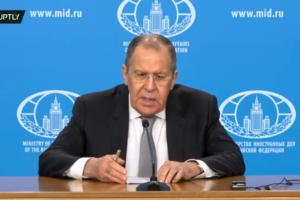 Early Friday morning, 14 January 2022, Russian Foreign Minister Sergei Lavrov held his annual lengthy Press Conference.  In it, he told gathered media “Russia’s patience with the actions of the West has come to an end, we have been harnessing for a long time – now is the time to go.”

He went on to say “While we are waiting for a response [in writing] from NATO on security guarantees, [which he later said they expect by WEDNESDAY] Russia is now preparing for _any_ development of events.”

Ominously, Lavrov made explicitly clear “If our proposals for security guarantees are rejected by NATO, we will assess the situation and start acting in the interests of our country’s safety. Russia knows how to ensure its security, and will not endlessly wait for some changes and promises from the West.”

While Lavrov spoke, Russia’s Pacific Fleet’s 155th Naval Infantry Brigade is crossing the entire breadth of Russia to deploy near Ukraine/Belarus. This is taking place along with several regiments from 4 armies of the Russian Far East.

This is a completely unprecedented troop movement by Russia; way beyond any exercise they have ever mounted. They are scraping the whole country for every deployable combat unit.

The Russian Foreign Minister was then asked specifically if this means war against Ukraine.  His answer was surprising:  “No, it means creating counter-threats for the West and the appearance of Russian bases or missiles near the US borders, painful counter-sanctions for the West and the like. Russia does not need a war in Ukraine. There are too many kinship ties between Ukrainians and Russians.”

He then went on to say explicitly “The participation of Western instructors in the conflict in Donbass will cross all red lines and mean a direct clash between the “Russian people” and the NATO military.”

Elsewhere in the world, NATO chief Jens Stoltenberg said in an Interview with Repubblica News “NATO has made a decision to admit Ukraine and Georgia into the alliance, but did not set a deadline yet.”

He further clarified the decision was made in the year 2008 but no deadline had been set.

Also this morning, Russia’s Ministry of Foreign Affairs candidly pointed out “US and NATO face a choice: Either security indivisibility, or a confrontation that could have IRREVERSIBLE consequences.”

Computer Hackers have successfully broken into NATO Intelligence computers and stolen armament data.  The leak was most likely from the Logistics Planning Headquarters at the Armed Forces Support Inspectorate in Bydgoszcz.

Information found on the web includes armament of the Polish army, ammunition, spare parts for combat machines and specialized software.

The equipment disclosed also includes the gear purchased by the Polish army in the USA, Germany, and Israel.

These are strategic data that, for example, Russia’s intelligence is seeking, says General Piotr Pytel, former head of the Military Counterintelligence Service. In his opinion, such information is worth a lot of money.

Also this morning, several Ukrainian government websites down due to a major a cyberattack. Below is the Ukraine Ministry of Foreign Affairs website now. 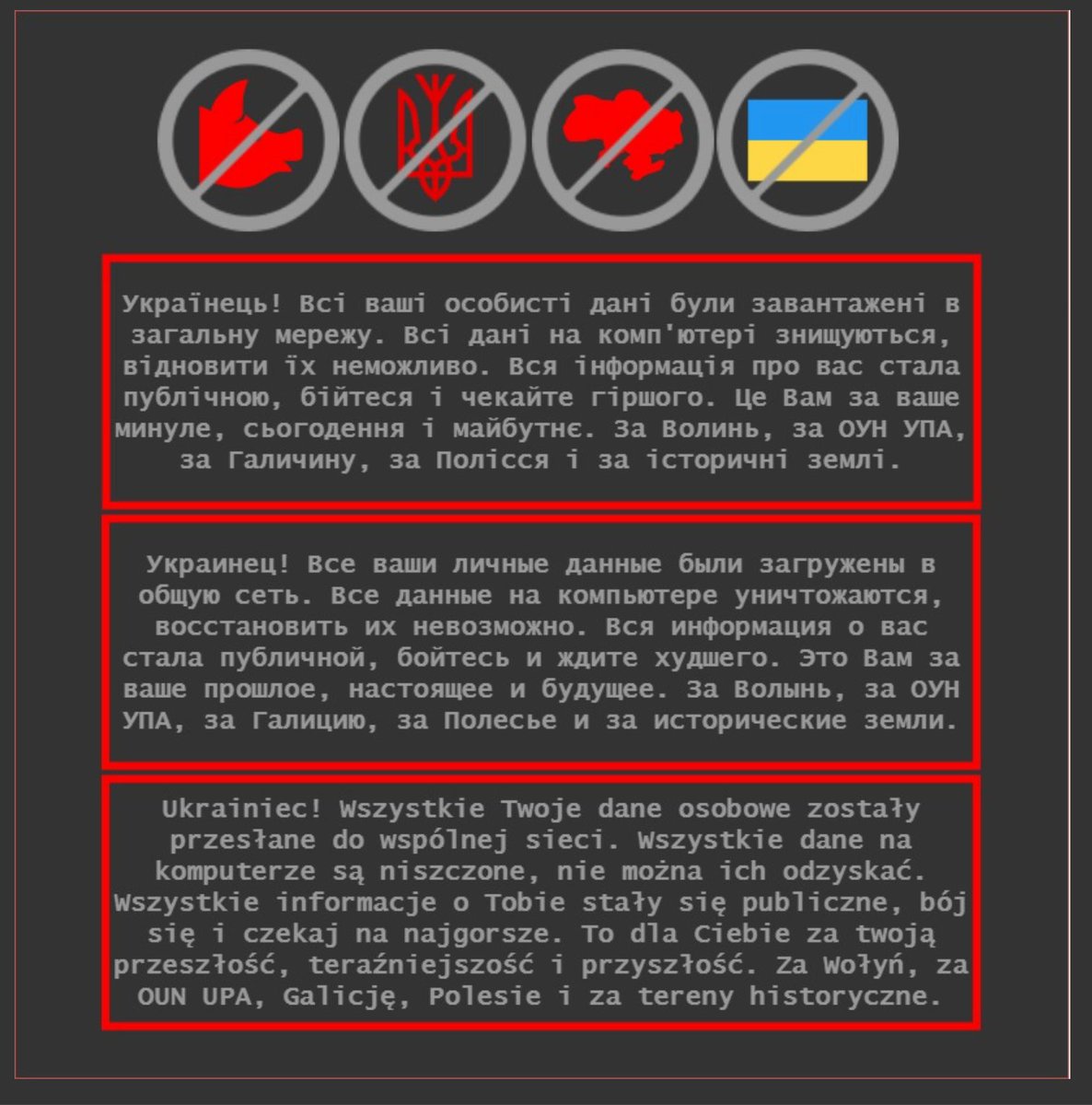 It reads in part: “Ukrainians!…All information about you has become public, be afraid and expect worse.” Sites of Ukraine’s Ministry of Defense and its Education ministry are also down.

This is all bad news. Russian state media has starting to run with it. Once this gets out to Russian public, it’s bad news; and it already got out 20 mins ago.

When the Russian people find out en-masse that NATO actually has solidified plans to completely surround Russia with bases and missiles, the Russian people are very likely to quickly support just about ANY government actions to protect their nation.

A senior Russian diplomat says that a Russian military deployment to Cuba and Venezuela can’t be excluded if tensions with the United States mount.  So there we have it: Another “Cuban Missile Crisis?”   This time, however, the missiles they place in Cuba won’t be taken out, and thanks to our own government, all of us will then live under the reality that Russian nuclear missiles can be launched form 90 miles off our coast, strike OUR cities with only 5 minutes flight time, – meaning we get no warning, we just blow up.

All this because the nitwits running the US government are too stupid, arrogant, and ignorant of actual history, to be responsible or respectful of others. They are immature, with the minds of children in adult bodies, whose parents did a lousy job of raising them. Spoiled brats who think they can do whatever they want.

Maybe Americans should pay a visit to some of those parents, slap them in their face and tell them “this is for doing a shitty job raising your child (insert name here) who is now endangering the rest of us.”

United States Senator Chris Murphy (D-CT) says the a warning from Undersecretary of State Gloria Nuland about Russia planning a “false Flag” to justify invading Ukraine should be setting off alarm bells.  It is the U.S. that uses “false flags” like the Gulf of Tonkin to start wars . . .

Here is a tweet from Senator Murphy of CT citing Undersecretary of State Gloria Nuland.  Bear in mind as you listen to Nuland is that SHE was instrumental in fomenting, inciting, and funding, the riots and protests that ultimately resulted in the overthrow of Ukraine’s government in 2014.

My personal “take” on this is that they are setting up a narrative because THEY (The USA/EU/NATO) are actually going to attack Russia and then claim Russia did it to themselves to create an excuse to go to war.

The fact that they are already saying “False Flag” by Russia should be triggering all sorts of red lights flashing.  It seems (to me) the US/EU are going to deliberately start a war with Russia.

Bear in mind that negotiations between the US/NATO and Russia collapsed this week.

Russia has put forth two Treaty Proposals, one to the USA and another to NATO, to address Russia’s security concerns.   The US and NATO have both flatly rejected Russia’s proposals.

Today, Russia’s Foreign Minister, Sergei Lavrov, said publicly that Russia expects written answers to its Treaty Proposals, and those answers must be in “by next week.”   I took that to mean by the END of next week.

So for me, living just outside midtown New York City which will probably be hit by Russian missiles when this war kicks off, I thought I had some breathing room for about a week before evacuating.  Now, I’m not so sure.

If the US is saying there is going to be a Russia False Flag to start a war, and since I think it is actually the USA that will cause the “False Flag,” then my belief that I may a week to evac, is no longer a stable assumption.

We need to pay extremely close attention to what’s taking place, folks.  We are standing on a precipice, overlooking an abyss.  World War 3 could be just days away.

If war starts, it will not be limited to Ukraine.  I truly believe we will be hit HERE, in the USA.