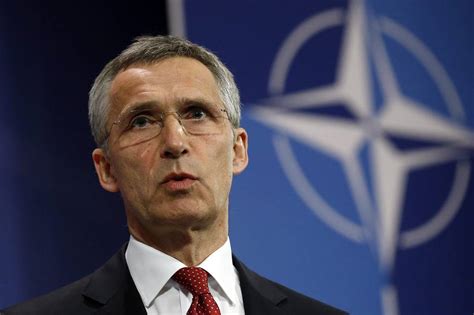 Look at the body language.

“These lands are Ukraine,” he stressed, adding that “Crimea is Ukraine”. He said, “This is the second time Russia has taken Ukrainian territory by forces… it does not change our commitment to support Ukraine.”

“NATO is not a party to conflict,” he said, stressing that the alliance will remained undeterred in supporting Ukraine’s defense against Russia’s invasion. He called the annexation the “Most serious escalation since the start of the war.”

He called Putin’s annexation ceremony and speech from hours prior “an admission that the war is not going to plan, and that Putin has failed in his strategic objectives.” He explained, “If Russia stops fighting there will be peace, if Ukraine stops fighting, it will cease to exist.” We will remain resolute “for as long as it takes,” Stoltenberg emphasized. He also said if Putin wins in Ukraine, then it will be “dangerous” for the NATO alliance. He said “we haven’t seen any changes in their nuclear posture,” speaking of Russian forces.

Even though this is a “first” for Zelensky (formally launching an application to the NATO military alliance), the whole thing remains largely symbolic, given NATO need unanimous consent when it comes to admission of new members. If just one country says no, such as Turkey or Hungary, then it’s a “no”.

Ukraine’s government has responded to Russia’s formal annexation of the four eastern and southern regions of Luhansk, Donetsk, Kherson and Zaporizhzhia on Friday by saying it has applied to become a member of the NATO military alliance.

President Volodymyr Zelensky has announced his country is submitting an “accelerated” application to formally join NATO. This could mark a huge escalation and turning point in the war, largely dependent on NATO leadership’s response, given the question of NATO expansion right up to Russia’s border remains a central motive in the Kremlin launching and continuing the invasion.

Of course, looming large over Brussels is the fact that based on Article 5, any acceptance of Ukraine into NATO would automatically trigger a Russia-West world war, and follows increasing nuclear rhetoric out of Moscow.

Zelensky was quick to put out a response to Putin’s major Friday speech wherein he referred to Ukraine as already a de facto part of NATO, saying:

“Today, Ukraine is applying to make it de jure… We are taking our decisive step by signing Ukraine’s application for accelerated accession to NATO.”

With the four territories now “forever ours” – as the Russian president had put it pointedly in his speech, he seems ready to negotiate a winding down of the conflict, calling on Kiev to lay down its arms. But Zelensky’s response to this was quickly issued:

Ukraine offered Russia “to agree on coexistence on equal, honest, dignified, and fair terms,” but this is impossible with “this Russian president.”

“We are ready for a dialogue with Russia, but with another president of Russia.”

Zelensky response: He says Ukraine is de facto part of NATO alliance. “Today, Ukraine is applying to make it de jure… We are taking our decisive step by signing Ukraine’s application for accelerated accession to NATO.” pic.twitter.com/8Bb8G8xnaF

According to Ukrainian regional media, “NATO Secretary General Jens Stoltenberg will hold a briefing on Sept. 30 at 7 p.m. [12pm eastern US time] The topic hasn’t been announced.”

Is Brussels ready to answer in the affirmative? Or will cooler heads prevail and walk back from the brink?

However NATO chooses to respond, the reality remains that NATO has already been at Russia’s doorstep in Ukraine for years at this point, with weapons shipments and military infrastructure continuing. Increasingly, there looks to be no off-ramp as both sides keep doubling down on threats and action.