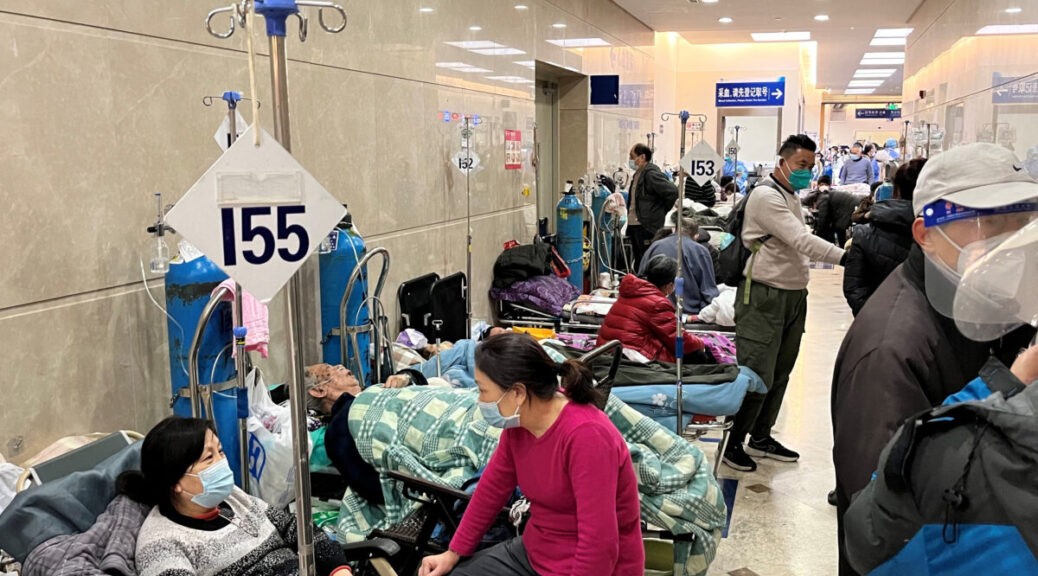 I’m calling BS on all of this. I’m just not sure what the real plan is. I discussed some of the possibilities on this segment of my show today, but I’d love to hear what everyone else thinks.

About 900 million Chinese are estimated to be infected with COVID-19 in China’s latest outbreak, with nearly 80 percent of them facing severe symptoms, according to a study by Peking University. Meanwhile, Chinese health officials are acknowledging that about 60,000 COVID-related deaths have occurred in hospitals across the country in the past month, following international pressure for transparency and data.

As of Jan. 11, 64 percent of China’s 1.4 billion population—about 900 million people— had been infected with COVID-19, mainland Chinese media outlet Economic Observer reported on Jan. 13, citing a recent study from a research group led by professor Ma Jingjing at the National School of Development of Peking University.

The report states that the highest infection rates for the current round of the outbreak are in three provinces in western China. Gansu province was highest ranked with about 91 percent of people being infected, followed by Yunnan province with an 84 percent infection rate and Qinghai province at 80 percent.

The model estimates of infection rates in the study were calculated based on search volumes on online platforms for symptoms related to COVID-19 infection, according to Ma. Given the lack of official data, the authors used the number of online searches for symptoms such as “fever” and “cough” as an indication of local infection rates, she said.

The study likely didn’t include many older Chinese, since they aren’t accustomed to searching for information online, China affairs commentator Li Muyang pointed out during his talk show on NTD on Jan. 13. Reinfection rates also aren’t likely captured by the estimates from the study. The actual infection number in China could be higher than 900 million, he said.

The modeling in the report also predicted that the current wave of COVID-19 infections across China reached its peak on Dec. 20, 2022. However, other experts believe that infections may continue to increase as the Lunar New Year holiday approaches.

COVID Wave Yet to Peak

Zeng Guang, former head of China’s Center for Disease Control, said at the “Shenzhou Cell New Crown Recombinant Protein Multivalent Vaccine Research and Development Conference” on Jan. 8 that the COVID wave has just begun to reach its peak in some places and hasn’t yet peaked in rural China, according to mainland Chinese media outlet Caixin. Zeng estimated that the peak of the COVID wave will come sometime between February and March and that the duration of the peak of severe cases will be longer.

Zeng expressed concern about the situation in China’s rural areas, where many Chinese are expected to visit over the New Year holiday. He said there are a large number of elderly, young, sick, and disabled in rural areas and that the medical infrastructure and conditions there are poor.

Zhang Wenhong, China’s top epidemiologist and director of the China Medical Center for Infectious Diseases, said in a lecture this year that the infection rate of this wave is very high.

During the Lunar New Year on Jan. 23, the national infection rate may reach 80 percent, which means that more than 1.1 billion people will be infected, he estimated.

The research group at Peking University surveyed 11,443 COVID-19 patients and 76 percent of them reported that their symptoms were worse than that of the flu.

The report states that most of the infected people interviewed had one or more symptoms of fever, cough and sputum, nasal congestion, runny nose, sore throat, altered sense of taste and smell, and diarrhea. The most common symptom was a fever, with 82 percent of infected respondents developing the symptom, of which 75 percent had a high fever (38.5 degrees Celsius/101.3 degrees Fahrenheit and above), and 47 percent had a fever lasting for three or more days.

As many as 86 percent of the infected used antipyretic drugs.

“Didn’t the so-called experts say previously that 90 percent of the infected people are asymptomatic?” one netizen posted. “Now come out and explain.”

Another posted, ”I have a fever. My whole body is sore and I feel weak. I was told that I was a mild case.”

A post reads, “The aftereffects of COVID are very serious. I was infected almost a month ago, and I am still weak, and I am out of breath when I move around.”

The release of the number came following widespread international criticism, including from the World Health Organization, of the Chinese communist regime for underplaying the severity of the outbreak and its lack of transparency.

It immediately became the most searched topic on baidu.com, the Chinese equivalent of Google. Many Chinese are still questioning the accuracy of this official number.

One posted on social media, “Hospitals recorded more than 50,000 deaths, but there are many deaths in urban and rural areas that haven’t occurred during hospitalization and are not recorded!”

Another netizen said, “How many deaths are there in rural areas that are not in the hospital? It should be many times the death toll in the hospitals.”

One post reads, “How many died without going to the hospital?”

Feng Chongyi, a China expert and professor at the University of Technology Sydney, told The Epoch Times on Jan. 14 that the ruling Chinese Communist Party (CCP) is seriously concealing the truth and that the actual COVID-19 death toll may be much more than what the Party has reported.

“Because foreign media reporters went directly to the funeral homes to see the situation and posts flooding social media showing so many dead bodies and so many coffins everywhere, everyone knows that Beijing is lying,” Feng said. “The relationship between the WHO and CCP is also very tense, as the WHO kept asking it to release the real data. The Chinese regime is under pressure. It is now making a slight change, even if it reports tens of thousands more [deaths], it is still far from reality. The actual death toll is likely 10 times, 20 times, or 30 times more than the data it just released.”

He noted that the CCP’s top echelon know very well that many people have died during the latest outbreak, but they dare not admit to their policy failure.

“Even though Xi Jinping’s ‘Zero-COVID’ policy was abandoned, he never came out to say a word about it, nor did he express even the slightest sympathy toward the people for their sickness and death,” Feng said. “He is still praising his achievements [in handling COVID].”

Feng believes that the delay and concealment of the real data in this round of China’s COVID-19 outbreak has shattered the CCP’s credibility.

Ning Haiphong and Luo Ya contributed to this report.

15 doctors permanently off the roster: ‘The darkest moment in Chinese medical history’

According to revelations from Chinese media on January 2, the recent COVID pandemic is becoming very serious in SHIJIAZHUANG CITY, HEBEI Province. In addition, the tragic fatality of 15 doctors and staff at Bethune International Peace Hospital attracted public attention