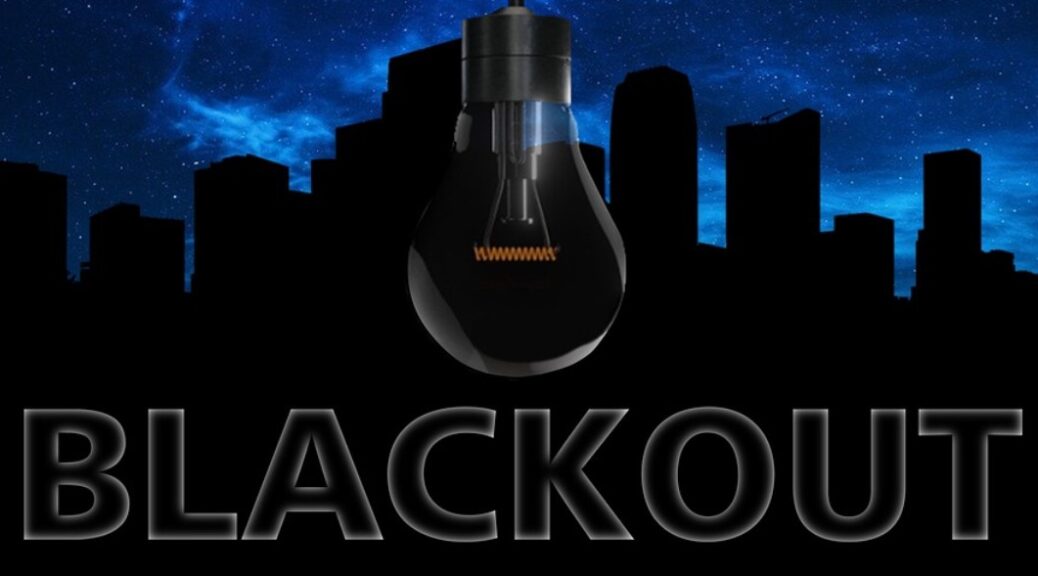 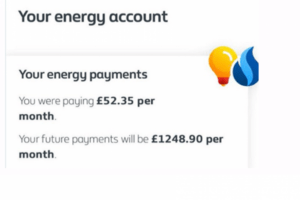 People in the United Kingdom have begun receiving their Energy Bill Budgets for the new year and the “typical” family is seeing a Two-thousand, three-hundred percent (2300%) increase in costs!

As shown in the image above, one homeowner — not a business — has been told his last monthly Budget was 52.35 British Pounds per month, and this is going up to 1248.90 British pounds per month.

I don’t know about you, but I could not financially handle that kind of increase in monthly energy costs.  I’m not certain how many families could handle it.

I suspect this will “break” the UK.

And all of it is due solely to the GOVERNMENT issuing economic sanctions against Russia, over the Ukraine thing.   If the sanctions were eliminated, prices would return to normal.  THIS IS SELF-INFLICTED and frankly, the intention to harm Russia economically,  has backfired.  The only ones being harmed by those economic sanctions, are us.

Did YOU elect your government public servants to have them cause this? To WRECK YOU financially?

Better get your public servants under control, before all of you collapse financially.

A German bakery was slapped with a €330,000 (US$330,000) gas bill after a new energy company suddenly terminated their contract which guaranteed pricing until the end of 2023, Junge Freiheit reported, citing Bild.

“Are they crazy?” said owner Eckehard Vatter, who says he has 14 days to pay the bill. “A year ago, we paid €5,856 per month in gas costs for our large furnaces and heating,” he added.

Vatter said his new energy supplier hasn’t given him a reason for the 1,200% price increase.

What’s more, since Vatter’s bakery is considered a ‘craft business’ under commercial law, he can’t receive any support from the state. He claims to have paid €19.9 million in taxes in recent years, according to ReMix.

Almost three weeks ago we noted that shocked Europeans had been posting viral photos of absurdly high energy bills.

Days later, the German government announced a €65 billion relief package to cushion citizens and companies from skyrocketing energy costs. The agreement, which brings total relief to almost 100 billion euros since the start of the Ukraine war, was agreed upon by Germany’s three-way ruling coalition of Scholz’s Social Democrats, the Greens, and the liberal FDP.

Among the headline measures are one-off payments to millions of vulnerable pensioners and a plan to skim off energy firms’ windfall profits. In short, creeping nationalization of the energy sector.

And a couple days after that package was announced, Economy Minister Robert Habeck promised to help small and medium businesses.

“We will open a wide rescue umbrella,” he said during a Sept. 8 speech in Berlin. “We will open it widely so that small and medium enterprises can come under it.”

Unless you’re a bakery classified as a ‘craft business.’

Who could have seen this coming?

In 2018, President Trump slammed Germany for being dependent on Russian gas.

Today, Russia has cut off gas supplies to Europe and household energy bills may surge by $2 trillion. pic.twitter.com/LNs0RcaOm3

Germany’s municipalities are getting serious and preparing for the concrete consequences of a widespread power blackout. The Hessian Rheingau-Taunus district is the first of 401 German districts and urban districts to have a specialist company in Berlin examine and simulate what threatens in the event of a blackout in order to be prepared for the increasingly likely eventuality.

According to this, 400 deaths could be expected within 96 hours. After 24 hours, livestock would die, substations would fail, and water tanks would run dry. Then there would be looting, fires and economic damage in the hundreds of millions. Unlike Federal Minister of Economics Robert Habeck, district fire inspector Christian Rossel currently considers the risk of a blackout to be much more likely than a lack of gas, which would not have such dramatic consequences, even if one were not preparing for it.

The blackout, a widespread power failure, is sadly no longer a horror fairy tale of sinister conspiracy theorists as authorities now consider the danger to be real (but conceal the fact that it is home-made and a consequence of their own catastrophic policies).

The German Association of Towns and Municipalities (DStGB) sounded the alarm and warned of a possible overload of the German power grid. Even worse: cities and municipalities are not remotely prepared for such a scenario.

“There is a risk of a blackout,” said DStGB chief executive Gerd Landsberg told German weekly Welt am Sonntag that realistic scenarios are both hacker attacks and “an overload of the power grid – for example, if the 650 000 fan heaters sold this year are connected to the grid if the gas supply fails”. In this case, Landsberg expressly does not want to rule out widespread power failures.

The head of the DStGB is even clearer: the federal government has recognized the situation, but is not responding as it should. Every citizen must be aware of what happens when there is no electricity: “Then there is no water, you can’t fill up, after two days you can’t charge your cell phone. We are in no way prepared for such a scenario!”.

The “blackout” would only be a particularly drastic scenario. Less drastic scenarios such as electricity or gas shortages have long been casting their shadows. An umbrella organization for independent welfare in Germany based in Berlin, the Paritätischer Wohlfahrtsverband recently warned that, as a result of the exploding energy costs, “the livelihoods of social institutions and services are threatened to an unprecedented extent”.

Retirement and nursing homes, for example, are coming under pressure due to the rapidly increasing costs. The Federal Association of Private Providers of Social Services (BPA) predicted that “this crisis will cost some providers their existence because the burdens from rising energy costs, general inflation and the omnipresent shortage of skilled workers can no longer be borne”. And all this is just the beginning, according to Bloomberg. The federal government’s €65 billion financial aid package will not be able to prevent the impending recession.

Commerzbank economist Jörg Krämer meanwhile warned that the announced steps only “create the illusion that large parts of the population can be protected from the consequences of rising energy prices”.

What happens if the lights go out?

In the event of a widespread power failure, nothing works anymore. Internet, landline telephony and heating systems would fail first, followed closely by mobile communications and digital radio. Gas stations would run out of petrol, electronic money and payment systems would fail, food could no longer be cooled. Clinics, care facilities and water suppliers and disposal companies depend on their respective equipment to outlast the blackout. Rossel made it clear that the district could not ensure the power supply. Like Landsberg, he advised citizens to stock up on food and drinking water for 14 days.

The district will ensure that administration and civil protection work so that emergency aid can be coordinated. For this, the “equipment security” has to ensure electricity for servers and satellite-supported communication systems for the crisis management teams. The current emergency generator can run continuously for 16 hours. However, since the police, fire brigades and rescue workers would also need several 10 000 liters per day, negotiations are being held with heating oil suppliers.

All of these scenarios show a country that is on the brink of complete collapse in an emergency due to ideology-driven politics and decades of neglect of important infrastructure.

In addition, there is a risk of “load undersupply” due to the planned shutdown of the last three nuclear power plants, so that in certain areas the entire electricity demand of Germany can no longer be covered. Then large electricity consumers such as industrial companies would have to be switched off voluntarily or by force.

Moreover, the population hardly follows the recommendations of the Federal Office for Civil Protection and Disaster Assistance (BBK). As recently as July, the ill-informed German Minister of Economics Robert Habeck declared: “The fact is: we currently have a gas problem, not an electricity problem.” At the time, the statement was part of his propaganda strategy to prevent the continued operation of the three remaining German nuclear power plants.

Thus, Habeck pushed hundreds of thousands of citizens to buy fan heaters, which DStGB boss Landsberg now fears will finish off the German power grid. The nationwide “Warning Day”, on which the functioning of the civil protection measures is to be tested by means of a test alarm, will take place this year on December 8 – although it is actually scheduled for the second Thursday in September every year.

The last attempt two years ago, on September 10, 2020, failed miserably because not even the warning apps worked. In the event of an actual catastrophe, many citizens were not warned at all (similar to what happened three quarters of a year later in the Ahr Valley and in southern North Rhine-Westphalia during the flood of the century).

The Ministry of the Interior had described the test alarm as “failed”. A spokesman for the Munich fire department said at the time that there had been no sirens in the city for years because they had been removed after the end of the Cold War. The same applies to large parts of Berlin.

In 2021, the warning day was completely dispensed with because the BBK was supposed to set up a “comprehensive test landscape” beforehand . This year’s warning day has been moved to December to accommodate Cell Broadcast testing. This is a system in which all mobile phone users who are in the area of ​​a radio cell at a certain time receive a message that looks like an SMS. Unlike the warning apps “Nina” and “Katwarn”, which failed in 2020, people without smartphones are also reached.

Given the current situation in Germany, one can only hope that at least this system will work.

Authored by Charles Kennedy via OilPrice.com,

As Germany desperately attempts to stave off a winter energy crisis, most recently seizing Rosneft refinery assets, a leak at a nuclear plant reported by the country’s Environment Ministry adds to the pressure, with operations now set to be shut in for a week as repairs get underway.

Germany’s Isar 2 nuclear power plant in Bavaria on Monday reported a leak that will require it to go offline in October for repairs.

The nuclear plant is already slated for a permanent shutdown at the beginning of next year as part of Germany’s plan to phase out nuclear power. However, given the looming energy crisis in Germany as winter approaches, there has been some discussion of delaying a phase-out of nuclear power.

The leak at Isar 2 means that a week of repairs in October will be necessary if the power plant is to remain operational beyond December 31st, Reuters reported, citing the plant’s operator.

Two weeks ago, German Chancellor Olaf Scholz rejected the idea of extending the country’s use of nuclear power and delaying the phase out of nuclear power plants. Germany’s opposition conservatives have called on the chancellor to keep the country’s two remaining nuclear reactors online. Scholz has resisted this temptation, insisting that the country will have enough energy resources to make it through the winter.

Under Scholz’s plan the remaining two nuclear reactors will be kept in emergency reserve but will not be producing any power, the Guardian reports.

Germany solidified its plans to quit nuclear power in 2011.

Under those plans, three reactors were shut down in 2021 and three more this year, with two remaining in the phase-out, including Isar 2.

The move is increasingly unpopular amid an energy crisis. 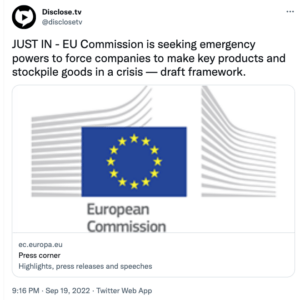 And In South Africa

South Africa’s state power utility, Eskom, has implemented its highest level of nationwide power cuts to reduce pressure on the grid after two more of its aging power plants broke down.

South Africans will be forced to go up to nine hours a day without electricity, putting a severe strain on Africa’s most industrialized economy.

The energy crisis is so severe that President Cyril Ramaphosa is cutting short his trip to the United Nations General Assembly in New York to return home and try to find solutions to the electricity shortages.