A new, “exceptionally virulent” strain of HIV has been discovered – but scientists stress there is “no cause for alarm”.

Oxford researchers have announced the discovery of a highly virulent strain of HIV that has been lurking in the Netherlands for decades, but because of the effectiveness of modern treatments, they say there is “no cause for alarm”.

Their analysis, published on Thursday in the journal Science, showed that patients infected with what they call the “VB variant” had 3.5 to 5.5 times higher levels of the virus in their blood than those infected with other variants, as well as a more rapidly fading immune system.

“There’s no cause for alarm with this new viral variant,” said Oxford epidemiologist Chris Wymant, the lead author on the paper, in an interview with AFP.

The variant likely arose in the late 1980s and early 1990s in the Netherlands, according to the researchers, but began to decline around 2010.

Since modern interventions still seem to work on the variant, the research team believes that widespread HIV treatment in the Netherlands did not contribute to the virus’s evolution, and that early detection and treatment are paramount.

“Our findings emphasise the importance of World Health Organisation guidance that individuals at risk of acquiring HIV have access to regular testing to allow early diagnosis, followed by immediate treatment,” said co-author Christophe Fraser, also an Oxford researcher, in a press release announcing the findings. A technician extracts blood from a patient for an HIV test in Mexico. Picture: Alfredo Estrella/AFP

The work also supports the theory that viruses can evolve to become more virulent, a widely hypothesised idea for which few real-world examples have been found.

The Delta variant of the novel coronavirus was another recent example. The discovery of the HIV variant should therefore “be a warning that we should never be overconfident about saying viruses will just evolve to become milder”, Dr Wymant told AFP.

In total, the team found 109 people infected with the VB variant, with only four living outside the Netherlands, but still in western Europe.

The HIV virus is constantly evolving, so much so that each person infected has a slightly different version.

The VB variant, however, was found to have over 500 mutations.

The research team first identified the VB variant in 17 HIV positive individuals by analysing a broad data set from the BEEHIVE project, a data collection initiative in Europe and Uganda.

Because 15 of the 17 were from the Netherlands, they further studied data from 6700 HIV-positive Dutch individuals, identifying 92 others.

The earliest appearance of the VB variant in their data was found in someone diagnosed in 1992 who had an early version of the variant, and the most recent in 2014. 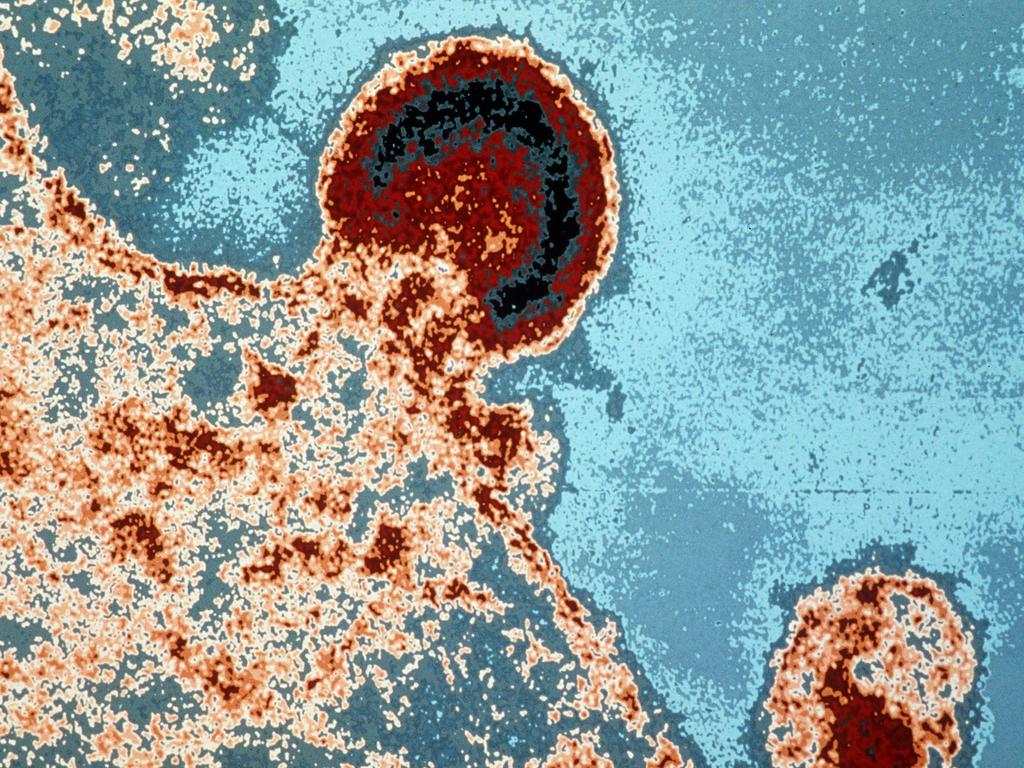 A microscope image shows the HIV 1 virus burgeoning on a lymphocyte.

Researchers have since found other individuals with the variant diagnosed after 2014.

Doctors usually measure HIV’s deterioration of the immune system by monitoring the decline of CD4 T-cells, which are targeted by the HIV virus and pivotal for protecting the body against infections.

In patients infected with the VB variant, CD4 decline occurred twice as fast compared to other variants, “placing them at risk of developing AIDS much more rapidly”, the researchers said.

In addition to its increased impact on the immune system, the team also found the VB variant to be more highly transmissible.

They came to that conclusion after comparing the different versions of the VB variant drawn from infected patients.

The fact that they were so similar suggests that the virus passed rapidly to someone else before it could accumulate many mutations.

“Because the VB variant causes a more rapid decline in immune system strength, this makes it critical that individuals are diagnosed early and start treatment as soon as possible,” the press statement noted.

“This limits the amount of time HIV can damage an individual’s immune system and jeopardise their health,” Professor Fraser said.

Professor Fraser is also the principal investigator of the BEEHIVE project, which was launched in 2014 to gather data on how mutations in the HIV virus can lead to varying degrees of severity among patients.

Those differences have previously been thought to mostly relate to the strength of individuals’ own immune systems.

The researchers said they could not identify which genetic mutation in the VB variant caused its virulence, but they hope future studies will be able to.