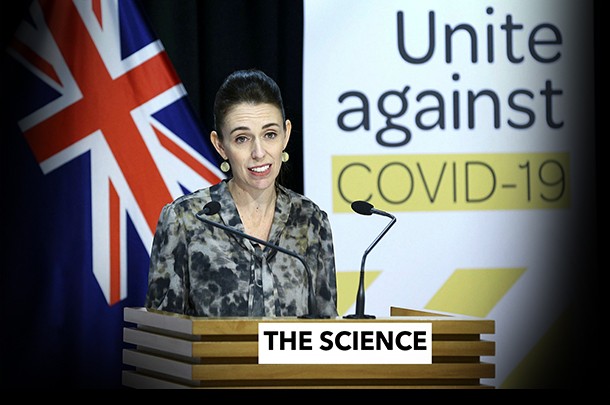 The saddest thing is that from the entire “team of million” (as Jacinda likes to describe us when she does not admonish us to “be kind” there is not one journalist – no one – who could have written an article such as this.

I often have differences of opinion with Patrick Henningsen but I commend this article absolutely.

He has done a fine job of eliciting the essence and is not guilty of any factual mistakes that one so often sees from international media.

“The real motivation for Ardern’s strange panic lockdown appears to be an attempt to leverage a mass-vaccination rollout in New Zealand. As of this month, the country is way behind its other Five Eyes fraternal partners, and will have no doubt been ordered by its advisors Gates, Blair and the WEF, to seriously step it up the jabs. Currently, only around 20% of New Zealand’s population who have accepted the unlicensed experimental GMO ‘vaccine’ gene-injection.”

By now, most sensible and sober people can agree that there is something seriously wrong going on in New Zealand, and that it’s got nothing to do with a coronavirus.

In this latest episode in a series of highly calculated, albeit reactionary moves by the government, New Zealand declared a new “snap lockdown” in the country after public health officials claimed to have discovered a ‘case’ of COVID-19. Yes, you heard that right. One single case.

Apparently, it was the first alleged ‘infection’ recorded in six months, said to have emerged in the country’s most populous city, Auckland.

In ordering this shutdown, Ardern has established what can only be described as a post-modern standard for declaring the existence of a ‘pandemic.’

Prior to this week, it seemed like Australia was world’s undisputed champion for baseless ‘snap’ lockdowns. Few could hope to eclipse the fascist wokery of the country’s merry band of technocrats, led by Premiers Dan Andrews in Victoria, and Gladys Berejiklian in New South Wales, and flanked by an even doggier gaggle of ‘public health’ quislings led by NSW state pandemic tsars; the irritable Brad Hazzard and his female sidekick, Dr Kerry Chant. In recent weeks, this globalist syndicate Down Under has accelerated from specious lockdowns, to a full-on fundamentalist vaccine rampage. The footage on social media of crazed public health officials and their foot soldiers (literally in some cases, as they’ve now deployed the Australian armed forces to enforce Covid laws and help jab the population) is certainly harrowing.

Hence, up until this week, Australia was the world’s leading congregation in the Cult of Zero Covid, with Chairman Dan and Gladys seemingly in competition with one another to see who could be more authoritarian and bombastic. Just last month, it took just six so-called ‘cases’ (PCR positive tests) for Victoria Premier’s to flip his galactic circuit breaker to supposedly ‘stop the spread’ (the population of Victoria State is 6.8 million), and with that, throwing the region and the country back into certain socioeconomic and political turmoil.

Granted, Australian autocrats were pretty chuffed with themselves at that point. Coroni seemed to be no match for such unabashed vigilance, that is until a frenzied mare came charging around the bend.

In the global Zero COVID sweepstakes, New Zealand suddenly taken the lead in what now looks to be a one horse race. Because once you lockdown your country for a single case – there isn’t anywhere else to go after that. The bar can’t go any lower, unless Jacinda wakes up one day and decrees a pre-emptive lockdown based on a feeling that Coroni is coming. I’m sure if you look hard enough, you can find some self-styled epidemiologist affiliated with an institution like Harvard, who will endorse that policy.

Not unlike Xi Jinping and Kim Jung Un, PM Ardern has a penchant for grand symbolic gestures and true blue ideological virtue signalling. This week was no exception. After not recording a locally transmitted ‘case’ of COVID-19 in over six months, Ardern seized the opportunity. Her devoted committee of public health apparatchiks claimed to have had identified where this mysterious single case originated (although not exactly) in the country’s largest city, Auckland. According to reports, claimed that there was possibly “a link between the case and the border or managed isolation is yet to be established.”

Then came the old worn out trope. ‘We’re following The Science,’ said public health mavens, assuring the public and a fawning media that this was all above board.

Ardern, a political protégé of Tony Blair, wasted no time enacting a “Zero COVID” lockdown set to last for seven days, covering both the Auckland and Coromandel areas, as well as a three day stint in the Corona Clink for the rest of the country.

Yes, it’s the old Delta Variant again. Experts insist that it could be lurking anywhere, waiting to pounce – from over the road, behind the bin, or maybe from the suspicious shrubbery next door. In the world of Zero COVID, you never can be too careful.

Most disturbingly, there has been a noticeable atmosphere of derangement which has become rather palpable in recent days, with regime police forces now openly mocking and trolling the public.

New Zealand Police tweeted out on their official account, “Who wants to play a game? Go home, stay home. You’re it.”

There is something seriously wrong with all this. The government seems to care little how it is perceived, and certainly not by its own electorate. It’s as if the regime is now above the law, hell-bent on a suicide run which is all but certain to derail any semblance of a democratic resolution to the current impasse.

For an increasing number of skeptical residents, the question now is: how long can the government carry on with the charade?

Unfortunately, as with Australia, and thanks to a diet of 24/7 state-sponsored mainstream media gaslighting and propaganda, much of the public have become acclimatised to the government’s vague prescriptions and constantly shifting Overton window of what constitutes ‘The Science,’ like a horoscope, changing from one day to the next.

In this instance, Ardern’s high council once again reserves the right to extend the decree should another ‘case’ appear on the scene, because, you know, you never can be too careful.

After all, ‘we’re still in the midst of a pandemic.’

“Don’t congregate with your neighbours. Don’t talk to your neighbours. Keep in your bubbles,” warned Ardern during her Oceanic press opportunity, borrowing that line straight out of Dr Kerry Chant’s B Movie horror script which aired last month in Sydney.

Watch as Ardern holds an emergency press conference to explain just how serious this new case is:

“We have seen what can happen elsewhere if we fail to get on top of it. We only get one chance,” said Ardern.

It’s now impossible to not question the scientific or rational basis behind Ardern’s increasingly demented authoritarian diktats. But the government can surely count on the mainstream news agencies to keep building-out new additions to this virtual rat’s maze.

According AFP, “Officials said a major factor behind the strong response is the fact that the Auckland case has no obvious connection to the border or managed isolation.”

New Zealand garnered widespread praise from the transnational corporate media and globalist organisations like the World Economic Forum, and the Tony Blair Institute, for its extreme COVID response, boasting having only 26 total deaths “from/with COVID” out of a population of 5 million.

It’s All About the Vaccines

However, the real motivation for Ardern’s strange panic lockdown appears to be an attempt to leverage a mass-vaccination rollout in New Zealand. As of this month, the country is way behind its other Five Eyes fraternal partners, and will have no doubt been ordered by its advisors Gates, Blair and the WEF, to seriously step it up the jabs. Currently, only around 20% of New Zealand’s population who have accepted the unlicensed experimental GMO ‘vaccine’ gene-injection.

Like Blair, Ardern is a big supporter of Vaccine Passports. Of course she is.

If you haven’t worked it out by now, it’s about the vaccines. It always was. All the commotion about a virus, followed by a global mass-testing regime – was merely a platform upon which to build a new transnational corporate vaccine empire. That’s the only logical explanation why any political leader, no matter how deranged and power-hungry they are, would risk fragile public confidence and invite a backlash by doing something as completely insane as locking-down a country for a single PCR positive (which is most likely a false positive) test.

If you look at the maniacal way in which the Australian government is currently prosecuting its mass-vaccination campaign – at a time which there isn’t anything even remotely resembling an epidemic, much less a pandemic – then it’s pretty clear that this was never about some virus.

It should be clear by now, that the supine nations of Australia and New Zealand are beta testing grounds for a new post-democratic, post-constitutional and post-enlightenment global world order, with bio-surveillance being the chief mechanism for an external locus of control.

The truth is coming out, along with reams of data, and plenty of peer-reviewed science which will eventually upend the ‘global pandemic’ narrative. The question is, will governments even listen, or are they now locked-in to an internationalised Zero COVID program?

We’ll know for sure this winter. Do not be surprised when the next new “variant of concern” is introduced on the global stage. Nor should you be surprised when they blame its ‘incredibly rapid spread’ on the New Normal apostates, those selfish and irresponsible ‘anti-vaxxers’, and those anti-maskers, and inconsiderate anti-lockdown dissenters.

Unless we snap out of it, and fast.

***
Author Patrick Henningsen is an American writer and global affairs analyst and founder of independent news and analysis site 21st Century Wire, and is host of the SUNDAY WIRE weekly radio show broadcast globally over the Alternate Current Radio Network (ACR). He has written for a number of international publications and has done extensive on-the-ground reporting in the Middle East including work in Syria and Iraq. See his archive here.