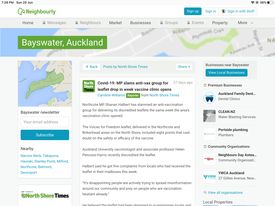 Stalinists in our midst.

Stuff,
20 June, 2021
Auckland University research fellow Kate Hannah tells you what to look for to identify misinformation about the Covid-19 virus and vaccine.

The Medical Council is investigating 13 doctors who may have given misinformation about Covid-19, with prominent experts warning those spreading misinformation should be prepared to lose their jobs.

The complaints follow an open letter by a group of doctors, health professionals and scientists who oppose the Covid-19 Pfizer vaccine. Among the signatories are 33 medical doctors, 100 nurses and 187 members of allied health professions.

Papakura GP and National Māori Pandemic Group, Whakakaupapa Urutā, co-leader Dr Rawiri Jansen said it was important people complained, and those found to have breached council’s standards should be sacked.

“It’s really important that people report things, that it’s investigated and taken seriously and if the investigation is going to take months that’s disappointing but necessary. To every extent possible, they should speed it up and the people who are needing to defend themselves need to be given due process, but let’s get it on, let’s get this done.”

A Council spokeswoman said the council has received 26 complaints in 2021 “about doctors who may have provided misinformation about Covid-19”, and 13 were being investigated. Doctors under investigation by the Medical Council could be struck off, if they were found to have spread misinformation .

The council’s statutory role under the Health Practitioners Competence Assurance Act 2003 is to register doctors, issue practising certificates and review complaints. It has the power to suspend doctors if necessary.

After an investigation by a separate, independent professional misconduct committee, the council could refer a doctor to the Health Practitioners Disciplinary Tribunal (HPDT). Investigations took nine months to complete, on average, the spokeswoman said.

University of Otago public health expert Michael Baker said doctors had a duty to look at the best evidence and guidelines.

“Misinformation kills, we know that.”

Jansen said the number of doctors involved in misinformation was “overwhelmingly small” but their influence was great.

“That one person who has had that experience is going to be talking with multiple other people, so it is a concern for many more people, not just the person who was exposed from the health professional.”

Jansen, who is also clinical director for the National Hauora Coalition of 55 kaupapa Māori medical practices, said general practice managers and public health organisations had an obligation to act when they became aware of a doctor who held views that could not be well-supported by evidence.

He had not had any concerns raised about doctors employed by the coalition.

Jansen said misinformation was among many potential barriers to the success of the vaccination programme for Māori, but not the greatest

He said Māori should have been prioritised for access to the vaccination in recognition of their greater vulnerability to more severe consequences of a Covid-19 infection.

I also found this from Neighbourly,who describe themselves as a “neighourhood website”

One thought on “New Zealand adopts the Stalinist China Way”