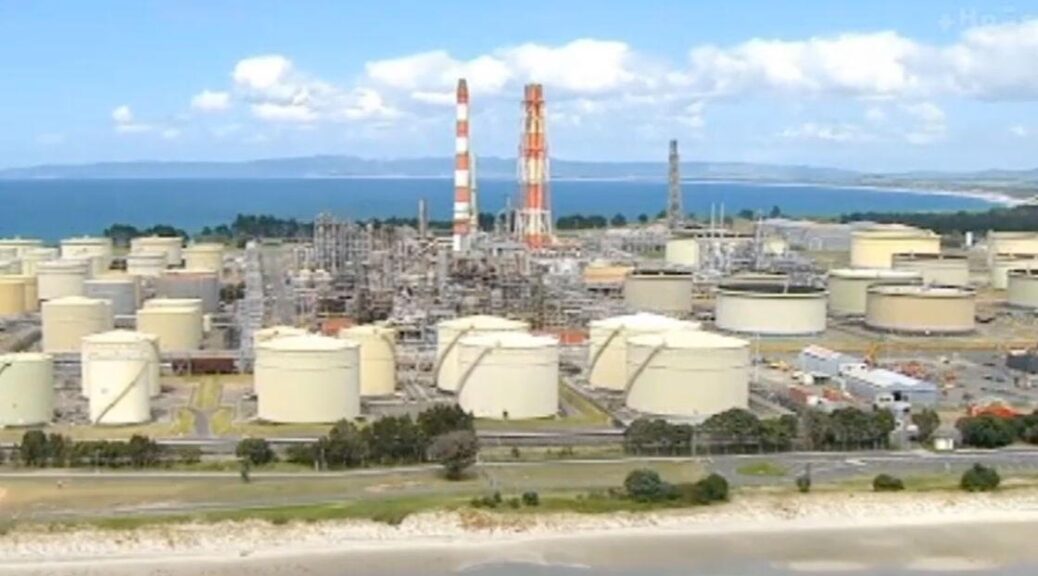 Don’t tell me that New Zealand is not committing national suicide, just like the resst of the world, especially Europe.

Businesses used to get much of their supply from the Marsden Point oil refinery, which produced CO2 as a by-product of its refining operation until that was closed at the end of March.

Now the only remaining domestic source of liquid and other food-grade CO2 is a production plant attached to Todd Energy’s Kapuni gas field in Taranaki. Tegel is warning that it may not be able to produce some chicken products because of a shortage of carbon dioxide gas in New Zealand that is also threatening brewers and fizzy drinks makers.

The Brewers Association and the Beverage Council separately voiced concerns about the gas shortage on Saturday.

Carbon dioxide (CO2) is used widely in the food industry – including in packaging to preserve the shelf life of chicken – and to add fizz to drinks, as well as in other industries such as healthcare.

Businesses used to get much of their supply from the Marsden Point oil refinery, which produced CO2 as a by-product of its refining operation until that was closed at the end of March.

Now the only remaining domestic source of liquid and other food-grade CO2 is a production plant attached to Todd Energy’s Kapuni gas field in Taranaki.

Todd Energy confirmed last week that production at the plant, which was built in 1969, had been reduced “with planned maintenance impacting production through to mid-August”.

Tegel said in a statement supplied by the Food and Grocery Council that, following the closure of the Marsden Point refinery, its supply of CO2 had been “significantly rationed” and it had seen costs for food grade CO2 increase substantially.

“Whilst we have been able to take steps in the short term to reduce the impact of the CO2 shortage on our production, the ongoing supply constraint may impact our ability to produce some of Tegel’s products over the coming months,” it said.

Carbon dioxide can be imported, but Beverage Council spokesperson Emily Fuller has described that as an expensive option because of high freight costs and the fact the gas needs to be transported in heavy cannisters.

A Food and Grocery Council spokesman said the issues at Todd’s Kapuni plant were a concern, given it was now the only domestic source of food grade CO2 in the country.

Carbon dioxide was used as a preservative for meat, cheese, and ready-to-eat meals, as well as to make fizzy beverages, such as beer, bubbly, and soft drinks, he said.

“If this situation isn’t resolved, before long there could be a shortage of those products on supermarket shelves and prices could even rise as a result,” he said.

“Some of our members have been told they will be getting just 50% to 55% of orders. Manufacturers will have stocks of CO2 and product on hand but they won’t last indefinitely.”

By Phil Pennington for RNZ

The government has been warned that closing down the country’s only oil refinery could expose New Zealand to fuel security risks.

The Energy Minister said these risks are not significant, but a consultant’s report to the government says the opposite.

The risks centre on reconfigured supply chain, meaning the country would hold significantly less fuel because it held no crude awaiting processing.

Officials have sought a review of the risks to a reconfigured supply chain from a pandemic, natural disaster or regional war.

Plans for a $250m shutdown of the country’s only refinery, Marsden Point at Whangārei Heads, to turn it into an import-only terminal instead are already well advanced.

Officials have also raised questions about 320 jobs being on the line, and about cleaning up the contaminated site.

The change to stop refining is expected to cut fuel throughput at Marsden Point by 40 percent, and leave it needing only a third of the land and a fifth of the tanks.

Briefings from the Ministry of Business, Innovation and Employment (MBIE) to Energy and Resources Minister Minister Megan Woods show central and local government in talks with Refining New Zealand since early last year.

Woods has told the company about the strategic importance of the refinery. Officials say this revolves around fuel supply security, jobs and getting new green-fuel industries going.

“The maintenance of domestic refining capacity is of some strategic value to New Zealand, at least for a transitional period,” they told Woods.

The company has countered that the change carries no risk because overseas fuel supply chains are diverse and strong, and some official advice echoes this.

Refining NZ is beset by increasing competition from bigger refineries in Asia.

The extra blow of COVID-19’s impact on demand already led to it reducing refining this year.

A recent $750 million expansion and investment has not paid off at the 60-year-old refinery.

It has painted the change to an import-only terminal – importing 3 billion litres of processed fuel a year for Auckland and Northland – as a matter of survival.

In 2020, the company talked of carrying on with reduced refining till 2035, then going full import.

But that appears to have sped up: “The earliest possible timing of import terminal commencement is in 2022,” a briefing said.

Documents show conversion could take between 18 months and five years, and cost $200m, plus $50-60m on demolition.

Local iwi are concerned about how contaminated land is handled.

Environmental assessments say the aquifer beneath the refinery “is already contaminated due to the presence of hydrocarbons in groundwater, and for this reason, the resource has little value for other purposes”.

The conversion plan must still pass the hurdle of a shareholder vote later this year.

However, two of its three biggest customers, BP and Z Energy, are already on board.

Refining NZ has told the government that if the refinery is shut down, fully restarting it ever again would cost too much.

Some changes have not waited for a vote: Marsden Point has already permanently cut bitumen production.

The biggest bitumen user, the Transport Agency,issued a tender in December saying it had “identified potential risks” in the future bitumen market.

“These risks relate to security of supply of quality bitumen … cost-reflective price of bitumen at points in the supply chain, and downstream competitive effects within our contracting markets.”

A 14-page consultants’ report to MBIE in March 2020 listed eight risks to stopping refining, including:

“The change of the Marsden Point facility to a fuels terminal would have a significant impact of New Zealand’s fuel security.”

By contrast, Woods’ spokesperson last night said officials had advised the conversion “is not expected to have a significant impact on fuel security”.

“Relying solely on imports of finished fuel products, which are ready for distribution, allows for a flexible response to fuel supply disruptions.”

Conversion would probably increase by up to $12m the annual cost to the Government to meet its international obligations to hold 90 days of stocks.

MBIE has received a review of geopolitical risks and natural disasters to the supply chain, but not released it yet.

The Ministry of Foreign Affairs and Trade (MFAT) told the MBIE there was “quite a significant national security element to having 100 percent reliance on fuel imports”.

MBIE said it will manage risks by finding some suppliers outside Southeast and North Asia.

Its briefings note 320 jobs could go from stopping refining, including the refinery’s 50 engineers.

Working groups are looking at the impacts on the region’s economy.

The cost of importing petrol to New Zealand hit a fresh record earlier this month, according to the latest data collected by the Ministry of Business Innovation and Employment (MBIE).

These prices were a couple of cents above the previous record high, reached a month prior.

They were also around 25 cents above what importers were paying in March, when the Government decided to ease costs for motorists by temporarily slashing the petrol excise duty by 25 cents per litre, and road user charge by an equivalent amount.

The Government, at the May Budget, announced the duration of the three-month fuel tax cut would be extended by two months.

This means the petrol excise duty discount is due to be dropped in August.

Prime Minister Jacinda Ardern wouldn’t say whether the Government would extend the discount again, when asked about the matter on Monday afternoon.

But she made the point the discount is, at this stage, due to end at the same time a $350 “cost of living” cash payment is being made available to those who earn less than $70,000 a year and don’t get the Winter Energy Payment.

“We really thought about the sequencing of those two things,” Ardern said.

“But we’ll continue to monitor what’s happening in the market at the time of those decisions.”

However, prices surpassed these levels last week, in Wellington at least. Petrol prices in Auckland are above the national average, because Aucklanders are charged an additional regional fuel tax.

He said sanctions on Russian oil exports, and reduced oil supply in Libya due to internal conflicts, were among the issues putting upward pressure on oil prices.

Collins also noted demand for oil from China is due to rise once the country relaxes its Covid-19 restrictions.

He said oil inventory levels are low around the world. What’s more, investment in oil and gas exploration and production is waning, as governments around the world look to cleaner energy sources.

He said 93 per cent of New Zealand’s freight travels on the back of a truck.

“The reality is that half the Government’s $27 per week cost of living payment will be wiped out immediately if people are having to pay an additional 25 cents per litre on fuel,” Leggett said.

“Removing the RUC reduction to the trucking industry would also raise the cost of everything we buy in the shops, easily wiping out the other half.”

This is what they say:

Why is Marsden Point oil refinery closing and should we care?

Labour MPs and the refining company argue fuel supply has always relied on imports, and closing the refinery will not make New Zealand any more vulnerable than it always has been.