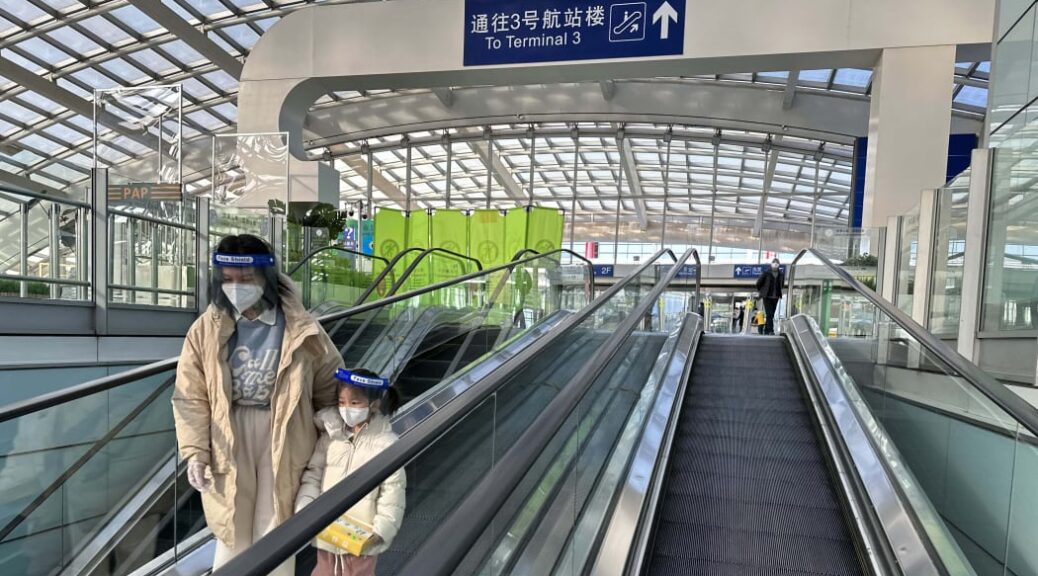 “Let em in, consequences be damned!”

Chinese officials have admitted that the country’s total number of Covid-related deaths is ‘huge’, with one doctor saying as many as 70 percent of Shanghai’s 25 million residents may have been infected.

In a rare admission, health officials said on TV that the country was seeing an increase ‘in the critical cases or the fatalities’. However, in an attempt to play down the situation, they claimed that the surge was in line with other countries.

Beijing also criticised nations that now require Chinese passengers to show a negative Covid test before entering – that include the UK and the US – warning it could take ‘countermeasures’ in response.

The Chinese government has suggested that travel restrictions imposed on Chinese arrivals are politically motivated – with New Zealand yet to decide whether it will require mandatory Covid-19 testing for travellers from China.

The United States, United Kingdom, Australia and India are among the nations that have already introduced mandatory testing for arrivals from China.

China has recently seen a surge in Covid cases following the easing of its strict controls and there are fears that cases and deaths are being vastly underreported.

China’s last daily Covid-19 update, on 24 December, reported fewer than 5000 cases – but some analysts claim the daily caseload is already over 2 million, and could peak at almost 4 million this month.

A lack of data – and China’s announcement that it was easing curbs on travel from 8 January – led to more than a dozen countries announcing Covid-19 testing on arrivals from China.

“We are willing to improve communication with the world,” foreign ministry spokeswoman Mao Ning told reporters in Beijing.

“But … we are firmly opposed to attempts to manipulate the epidemic prevention and control measures for political purposes.”

The Australian government’s move to introduce compulsory testing ignores advice from health officials, who labelled it an overreaction,

Baker said the government should introduce temporary pre-departure testing for any country with infection waves or new variants.

But it should only be a temporary measure while there were very high rates in China, he said.

Pre-departure testing needed to be based on very clear thresholds to include any country which was having a Covid-19 surge or had a particularly dangerous new subvariant, Baker said.

The World Health Organisation could play a key role and establish international guidelines, he said.

The WHO has expressed frustration that China was not reporting its case numbers and its director-general had said he could understand why countries were looking at these measures, Baker said.

It was not unusual to have pre-event testing which was already used on cruise ships and was a requirement at some conferences, he said.

“It’s just another way of reducing the risk of infection for people in those situations.”

China required travellers entering the country to have a negative PCR test, so the approach was even-handed, Baker said.

New Zealand needed to manage its borders on the best available evidence and to prepare for more dangerous new variants, he said.

New Zealand was also coming out of the third Omicron wave and infections should drop back to lower levels over the next few weeks, Baker said.

“But as we know of this virus, it looks like the pattern continuing to the future is of continuing evolution of new subvariants, maybe even new variants, that are good at evading our immunity and causing future waves – so that appears to be a pattern we could plan for for the foreseeable future.”

China has rejected an offer from the European Union to supply an unspecified number of Covid-19 vaccines to help deal with the surge in cases, saying it has an “adequate supply”.

Official data shows China has given more than 3.4 billion doses – the vast majority of which are CoronaVac.

The government has so far insisted in using only Chinese-made vaccines, which have been proven to be less effective than other Western-developed mRNA vaccines against the Omicron variant.

None of this bothers Jacinda Adern.

New Zealand will not require travellers from China to be tested for Covid-19, the government has announced.

The government this afternoon said imposing entry restrictions on travellers from China was not “required or justified”.

“Officials have done a public health risk assessment, including working through scenarios of potential case numbers among travellers from China. This confirmed these visitors won’t contribute significantly to our Covid case numbers meaning entry restrictions aren’t required or justified,” she said.

The Covid-19 variant in China should not require new measures such as mandatory testing to protect New Zealanders, the Minister added.

“There is minimal public health risk to New Zealand. We know that BF7 is the prevalent variant in China and that it hasn’t caused significant outbreaks in other countries that, like New Zealand, have already been exposed to the BA5 variant. So public health measures are not required to protect New Zealanders.”

Verrall said scientists from the Institute of Environmental Science and Research would begin a programme to test waste water from international flights to detect the virus.

She said this would be put in place in the “coming weeks”.

Scientists would then assess whether that should replace the random, voluntary testing of travellers from China she outlined today.

Verrall said that would involve “emailing a random sample of people recently arrived from China to ask them to undertake a RAT test and share that information with health authorities. It’s entirely voluntary and we have had high uptake from international visitors when we used this method before.”

The Chinese government has rejected claims it has deliberately underreported the total number of fatalities. It said decisions by other countries to restrict travel from China were politically motivated.

A number of countries including the United States, the United Kingdom and Canada have already introduced pre-departure testing for travellers from China.

Travellers from China to Australia will be required to have a negative pre-departure Covid-19 test from 5 January.

Epidemiologist Michael Baker earlier urged the government to follow Australia’s lead so those coming from China would have to prove they were Covid-19 negative.

The World Health Organization (WHO) had previously voiced concern about a lack of reliable data on case numbers in China and the Chinese officials’ work to address it.

On 28 December, a Ministry of Health spokesperson said New Zealand had no plans to introduce testing for Chinese visitors.

However, NZ government duty minister Stuart Nash said on 1 January that New Zealand was assessing the situation and had launched a public health risk assessment.