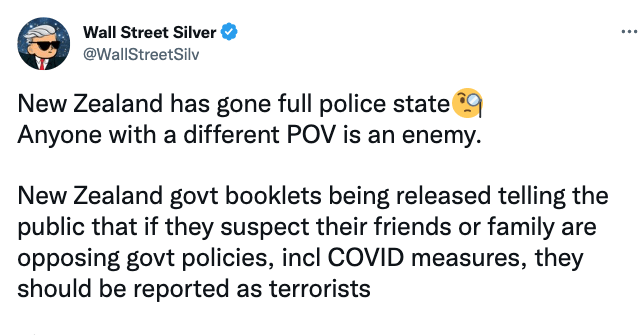 From here, each of these “warning signals” that Kiwis are being told to report to police and the secret service are, in fact, crimes against humanity perpetrated by the New Zealand government and enforced by its police force and secret service.

New Zealand has embraced the full dystopian, 1984 agenda. In October, the New Zealand Service released a guide to help the public ‘turn in’ potential terrorists,  including friends or family members. Uncle Bob talking smack about the government’s COVID measures? The government guide will help you decide if you should turn him in.” 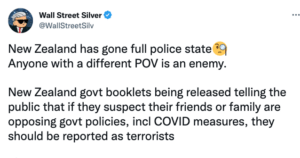 Anyone with a different POV is an enemy.

New Zealand govt booklets being released telling the public that if they suspect their friends or family are opposing govt policies, incl COVID measures, they should be reported as terrorists

The insidious inclusion of those intelligent to spot a lethal fraud when they see one, into a whole category of “violent terrorists/extremists” is an affront to common sense and human decency. It is obvious that those signalling their intention to commit violent acts using weapons and bombs are a danger to society. The activities of these violent extremists have ALWAYS been sensibly reported to the “authorities”. Including those that worked out the deadly fraud of C19 measures are not a risk.

New Zealanders need only look at outcomes to see the lies and harms caused by this approach.

From here: (NZ has a population of 5 million, so multiply around 70 to get US equivalent numbers).

In 2019 there were 1,154 excess deaths compared to the long term trend

The above was also refenced here: Open Letter: Investigation into Record Levels of Excess All-Cause Deaths in New Zealand

The crime is the blackmail, coercion of New Zealanders into the taking an experimental treatment without informed consent. The New Zealand government and its medical regulators are also guilty of failing to independently verify the results of clinical trials that indicated Level 1 Harms

The New Zealand Government is guilty of illegally imposing house arrest, forced mask wearing and lockdowns of businesses despite decades of research that such measures DO NOT WORK.

The New Zealand government is guilty of not validating the contents of injection vials to ensure compliance with contents of vials used in clinical trials.

Here is the “Signal” framework of the heinous crimes which the New Zealand government committed, that it is now projecting onto its own people:

Signal: We use the following framework when referring to the motivations or ideologies behind violent extremism.

Signal: Promoting the use of violence to achieve change to or within an existing political system.

The NZ government prevented opposition to all C19 measures, thus enabling a one-party state. The police used the violence inherent in arrest and imprisonment to achieve the goal of changing NZ into a de facto one-party state.

The NZ government is populated by a cult – the cult of Marxism and socialism that forcibly closed down churches because they do not support Marxism and Socialism.

Signal: Promoting the use of violence to advance one’s own spiritual or religious objectives.

As for the previous sentence, Marxism and Socialism are equivalent to religions, requiring adherence to cult like dogma.

The NZ government created an identity “the unvaxxed” and actively discriminated against them using police force to exclude them from society. This is apartheid.

Signal: Promoting the use of violence to advance one’s own perception of identity and/or denigrate others’ perceived identities.

The NZ government employed psychological violence via its promotion of an experimental gene modification injection, masking and lockdowns, physically enforced by the police force.

The apartheid system imposed on the unvaxxed, represents a single issue. The enforcement by police represents the violent extremism as it has no scientific, medical, ethical, moral or legal basis.

Signal: Promoting the use of violence to achieve a desired outcome to a specific issue.

As per prior comments, the specific issue is the segregation of the unvaxxed, in the face of a falsely classified pandemic. The NZ government used psychological violence. promoted and rewarded the use of physical violence against the unvaxxed by enforcing measures that were dogmatic, unproven and experimental or were known to be ineffective and harmful (masking, testing and isolation).

The WHO/WEF, New Zealand, Australia and Canada are each pursuing similar Stalinesque policies that impose inferior state policies on suoerior, but overly trusting populations. These governments and bodies are infested with quacks, kaikistocrats and bought and paid for health regulators, press and universities. They are wilfully ignorant and that wilful ignorance is lethal.